5 years ago at 8:09 am ET
Follow @IanLogue
Posted Under: Daily Patriots Notebook 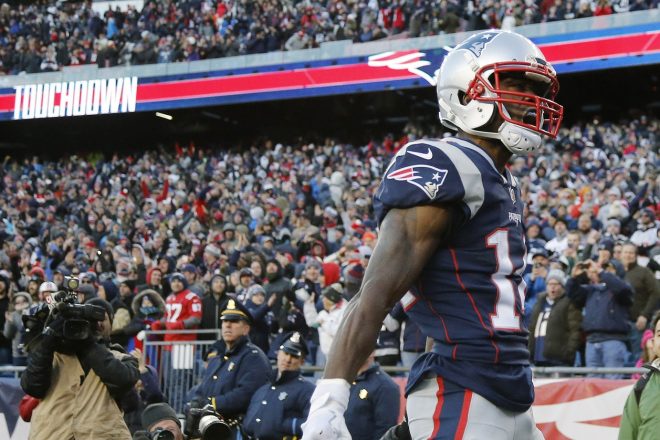 It was an interesting night Tuesday night, and here are some thoughts as we try and make sense of it all.

Cooks trade surprising, but not shocking –  Brandin Cooks’ first season in New England was certainly a productive one and the news of him being dealt to Los Angeles on Tuesday night was definitely unexpected.  However, upon further review, it actually wasn’t quite as shocking as some might think.

Cooks actually made 5 of the 10 longest plays of the season for the Patriots, holding the top two spots on the team with plays of 64-yards (a TD in Week 11 against the Raiders) and 54-yards (in week one in their loss against the Chiefs).

But one glaring number for Cooks that was mentioned quite a few times in this space was the fact that he’s never been able to be a consistent player, and his third-down totals last season were pretty staggering.  Brady completed just 7 of 26 targets to Cooks on third down, and the fact that many of those attempts came up empty in short-yardage situations sticks out like a sore thumb.

One number that stands out is the fact that in situations when the Patriots needed 5 yards or less, Brady was just 3-of-12 targeting him.  That probably explains why Brady only targeted him twice on third down during the entire postseason.  Overall, despite his high yardage totals, the two still had trouble connecting as Brady completed just 56% of his attempts when targeting cooks (75-of-133) – the lowest percentage of any receiver with 30 or more targets.

There were also plenty of occasions where Brady simply heaved the ball up to Cooks hoping he’d come down with it, and as we mentioned above, there were times where it did.  Other times he drew a pass interference penalty, but it seems like that topic came up in conversation this offseason and it would be surprising to see that luck carry over into another season.

As a result, Belichick may have felt that they had a player in Chris Hogan who possesses a similar skillset in their offense in terms of a downfield threat, with Hogan also having the versatility in terms of being a possession receiver.  He was injured much of last season, but in 2016 he was productive on third down with Brady connecting with him on 10-of-15 with 8 first downs.  When you factor in Hogan, the return of Julian Edelman, Kenny Britt, and Malcolm Mitchell, it’s still a pretty good group.  Moving Cooks may also signal that Mitchell’s outlook is looking positive, which should be something that could fly under the radar if he’s able to be anywhere near the player he was as a rookie.   However, in their current state, there’s not much margin for error should anyone suffer an injury, which would make you believe that another addition may still be coming.

Needless to say, Cooks sort of felt like a square peg that they tried to fit into a round hole but still somehow managed to squeeze out 1000+ yards doing it.  Now they’ve gotten back a first-round pick after sending both Cooks and a fourth-round selection to Los Angeles for the Rams’ 23rd overall pick and a sixth-round selection.  The trade definitely changes things, and the Patriots outlook suddenly just became a little brighter now that they have an opportunity to grab a couple of impact players in the upcoming draft.

The economics of the move also make sense, as the Patriots are able to acquire an asset in exchange for a player they likely wouldn’t have been able to re-sign given how high the market skyrocketed for receivers this offseason.  Bill Belichick is well-known for moving guys who fall into this category, and after evaluating Cooks’ body of work in their offense, clearly he felt the offer from the Rams made sense.

Every offseason is never dull and this one has certainly kept that trend going.   Given what we know, the odds are pretty good that the excitement may not yet be over, which should definitely make these final months of the offseason pretty interesting. 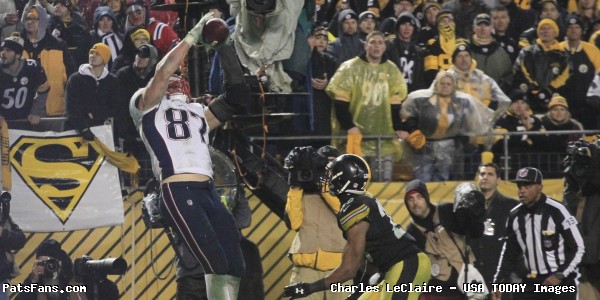 Move Signifies Gronkowski Isn’t Going Anywhere – The good news about the Cooks deal is it should quiet the speculation about the team potentially dealing their All-World tight end this offseason.

With Cooks now out of the picture, Gronkowski will anchor a group that is pretty talented and could still add yet another weapon before it’s all over should they make a move to bring another receiver.

Adam Schefter of ESPN echoed that sentiment Tuesday night, which leads you to believe that he may have enough inside knowledge of the situation to have made that statement.

New England trading Brandin Cooks to LA means that the Patriots will not be trading Rob Gronkowski this off-season, as some have speculated. Pats will rely on Julian Edelman, Chris Hogan, Rob Gronkowski, amongst others.

Gronkowski is coming off of a season where he finished with 85 receptions for 1302 yards and 11-touchdowns.  It marked his third 1000 yard season in four years, and the third time over that same span that he’s started 14 or more games.  He also caught 16 passes in the postseason, 15 of which moved the chains for first downs along with 3 touchdowns.

Gronkowski has already said he plans on returning as long as Brady is the quarterback.  Fortunately, for now, all signs seem to signal that fans in New England no longer have to worry about the team moving him before then.

Gilmore Not Happy About Cooks Trade – Patriots cornerback Stephon Gilmore might have only had one season to watch Cooks in New England’s offense, and it appears he’s not happy about seeing his now former teammate headed out of town.

Following the news of the deal, Gilmore took to Twitter to express his disappointment in the move.

Gilmore might not be happy about the trade but with two first-round picks, he might be feeling a lot better if Belichick comes out of the draft giving his defense some additional help in 2018.

Free Agent WR and TE In For a Visit – The Patriots continue to evaluate their options, with a couple of offensive players reportedly in town on Tuesday for a visit.

According to ESPN’s Field Yates, former Bills WR Jordan Matthews and Cardinals TE Troy Niklas were in Foxboro visiting with the Patriots.

Meanwhile, Niklas checks in at 6’6″, 270lbs and finished with 11 receptions along with a touchdown during his 11 starts in Arizona last season.

The news of Niklas’ visit is interesting, as the Patriots are reportedly the first team to show interest.  Whether or not this trip to Foxboro will lead to an opportunity remains to be seen, but it’s obvious the Patriots need some depth and competition behind Gronkowski at tight end, especially after the release of Martellus Bennett by the team last month. 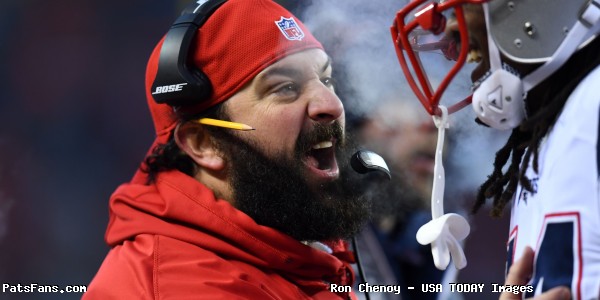 Matt Patricia Still Bothered By Super Bowl Loss – Patricia may still be in the middle of rebuilding the Lions, but it doesn’t change the fact he’s still disappointed he wasn’t able to leave New England on a high note.

The former Patriots defensive coordinator is still in the middle of getting his system up and running in Detroit as the new head coach of the Lions, but he took some time recently on Adam Schefter’s podcast and said he’s still frustrated with how things ended in February.

One thing that still bothers Patricia even now is the fact that by coming up short in 2007, it kept the late Junior Seau from being able to be a Super Bowl champion.

“You just wanted that for him more than anything because that’s what he deserved,” Patricia said. “He was a champion and he should’ve had that game. I always feel horrible that he didn’t have that.”

Patricia, who is known for his signature beard and pencil behind his ear gave a fun little anecdote after admitting that the pencil is as important as his wallet and phone, but sometimes it’s a hazard.

“The problem with the pencil is, I’m Italian so I like to hug,” Patricia said. “You gotta be careful because if I’m coming in on the right, and this thing’s extra sharp sometimes, you might get it on the side of the head…It’s dangerous.”

Quick note: Be sure to sign up for our Daily Newsletter below, which features hand-picked articles of all the top stories and breaking news delivered straight to your inbox each morning.