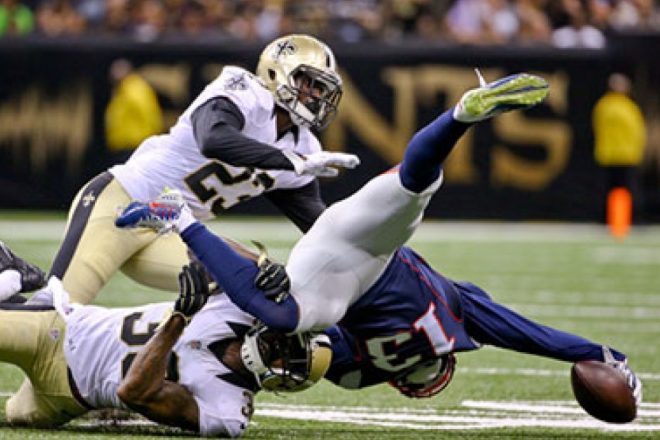 Saturday saw the Patriots notch their first win of the 2015 preseason following their come-from-behind performance against the Saints down in New Orleans which saw them battle back from 21-0 down and win in the final minutes.

The outcome isn’t as important as the individual performances, since as we know, these contests are nothing more than an opportunity to see how players respond in certain situations in the context of an actual NFL game.  Saturday night saw some players step up and perform well, while others likely can’t be too happy with how it played out and are likely looking forward to next week’s game against the Panthers.

Here’s a quick rundown of some of the winners and losers from this week:

QB Jimmy Garoppolo – Garoppolo had a good week of practice against New Orleans, and that performance carried over into Saturday night’s match-up.  Garoppolo missed just two passes in the first half, finishing 11-of-13 (85%) for 113 yards along with a touchdown, and overall finished 28-of-33 for 269 yards along with his touchdown.  He did throw an ill-advised interception when he was under duress, but overall it was one of the best performances we’ve seen from a back-up quarterback in a long, long time.

WR Brandon Gibson – Gibson had a terrific night, finishing as the team’s leading receiver after hauling in eight receptions on nine targets for 68 yards.  The bad news for now is he suffered an apparent leg injury late in the game and was spotted by reporters getting x-rays after the game, although he told them, “I’m alright.  I think so.”  The good news is if he escaped serious injury, he’s definitely made a strong case for a roster spot through two games.

WR Jonathan Krause – Krause finished a perfect a six-of-six when targeted by Garoppolo for 55 yards and overall was a reliable target for the Patriots QB and showed terrific quickness.  On a night where they needed guys to step up, it was good to see Krause work his way into the mix.

WR Chris Harper – Harper was another player who had a good night, finishing with 5 receptions on eight targets, including a 24-yard touchdown on a play where Garoppolo had to use his legs to shed a defender who nearly had him wrapped up.  Harper also did a good job returning punts, returning 3 for 32 yards along with one fair catch.

RB Dion Lewis – Lewis added some additional competition to the running back mix, showing he’s a formidable player after seeing some extended action and catching five passes on five targets for 36 yards.  He also had an 11-yard touchdown run.

RB James White – It took White a while to get into the game, but he picked right up where he left off last week, carrying 9 times for 23 yards including an 11-yard touchdown run of his own.  He also had one reception for 20-yards.

RB Jonas Gray – Quietly a decent night for him after he carried 7 times for 22 yards (3.1 avg)

DL Malcom Brown – Brown had a better week this week, doing a good job inside making things difficult on New Orleans running the football between the tackles.  With two games to go it will be interesting to see how he continues to progress in the final couple of weeks, but he’s definitely making progress.

CB Malcolm Butler – Butler was one of the few bright spots in the secondary Saturday night, making several plays as well as some high-impact hits.  He had a tough first day this week during joint sessions, but he seemed to be on top of his game in New Orleans.  That’s obviously good news considering the rest of the group still has their work cut out for them.

DL Jabaal Sheard – Sheard had another solid outing, and he did a good job being disruptive and also made himself a presence in the Saints backfield.  These games obviously don’t count, but it’s going to be fun to see what he can do once the team begins playing meaningful contests in the regular season.

CB Bradley Fletcher – Fletcher didn’t have a big night but he looked good in coverage and also finished the night with a pass break-up.  On a night where so much went wrong for other players, he deserves some praise.

LB James Morris – Morris made a textbook tackle where he punched the ball out and forced a fumble, which was a great play.  You can never have too many guys capable of forcing turnovers and that play was definitely one that stood out and it was just terrific to see.

LB Xavier Dickson – Did a good job on the night and even had one moment where he shed a block on a screen pass and blew up the play.  Always nice to see that from players like him.

LB Jamie Collins – Here’s a name you don’t expect to see on this side of the list, but it wasn’t Collins’ best outing, although it was more due to mismatches than anything else.  He found himself matched up in coverage against Mark Ingram and also had a tough time against Khiry Robinson.  Another moment was watching him when he found himself in an unfair battle with Jahri Evans, who is one of the best offensive linemen in the game and overpowered Collins, keeping him from shedding the block and making the play.  Let’s face it, the Saints have some good players with their first team and Collins seemed like he was in a position where he might have been asked to do a little more than he was capable of.

CB/S Devin McCourty – McCourty started the game at the right cornerback position and he just looked completely uncomfortable out there.  He had a difficult time in coverage and the play where the Saints scored against him saw him lose his man and Duron Harmon didn’t pick him up.  He expressed his frustration after the game and it’s clear he’d rather be back at safety.

S Duron Harmon – Harmon struggled in coverage and still seems to be growing into the expanded role they’re trying to give him.  He’s had an up and down preseason so far but there’s no denying that he’s got plenty of ability and a lot of upside.  Overall he’s just a great kid with plenty of talent and one would believe that by the time the dust settles he’ll be in the mix.

RB LeGarrette Blount – Blount was just plain awful Saturday night, finding himself unable to do much of anything against the Saints’ defense.  He started the game with a negative carry and put Tom Brady and the offense in a 2nd-and-15, and opened the third series the same way.  Overall he finished with 13 carries for 15 yards (1.2ypc) and it just wasn’t a good outing for the veteran.

OL Cameron Fleming – Fleming was called twice for illegal formation Saturday night, one of which came on a 4th down attempt that was declined.  It’s bad enough to have it happen once, but twice in one game is likely going to have him hearing about it from the coaching staff.

CB Logan Ryan – Ryan had another rough week against the Saints, and was beaten on a couple of long plays.  He’s frustrating because he’s already shown plenty of talent and has so much potential, so seeing him give up those long gains is tough to watch.  However, he deserves some credit because he never gave up, and was even in on a deflection.

DL Sealver Siliga – Was drawn offsides on a 4th-and-2 and gave the Saints a first down, which lead to him coming off the field and being stared down by Bill Belichick as he reached the sideline.  Siliga’s a good player, but that wasn’t his best moment.

WR Danny Amendola – With Julian Edelman, Brandon LaFell, Rob Gronkowski, and Scott Chandler all missing action, Brady really needed Amendola to step up, but it didn’t happen.  He had a tough time getting open including one play where he fell down and on both he looked to the officials for flags.  It was a disappointing night from a player who should have been able to rise to the challenge and be a playmaker.  Unfortunately, it didn’t happen.

READ NEXT:
New England Patriots News 8-23 and Notes Around the AFC East
Posted Under: Patriots Commentary