5 years ago at 8:44 am ET
Follow @IanLogue
Posted Under: Daily Patriots Notebook 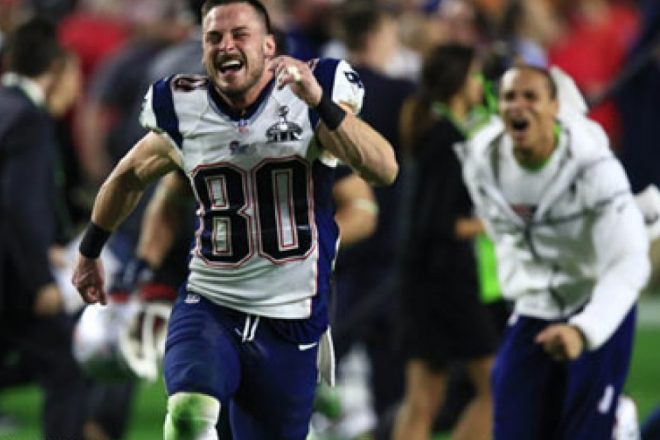 Things will look a little different in New England on both sides of the football in 2018, and Tuesday’s news definitely caught everyone off guard.   Let’s get to it.

Amendola Departing to Miami – Danny Amendola has been a team-first player during his time in New England, but with opportunity knocking to cash in while his value is higher than ever, the veteran receiver appears to finally be putting himself first.

According to published reports, Amendola has agreed to terms with the Dolphins, ending what has been an extremely solid career as a member of the Patriots.

His loss is significant because it creates a domino effect that’s definitely going to have a bigger effect in 2018 than some may realize.  They’re losing their best punt-returner, leaving New England with the prospect of having to now start looking for their next man up in the return game moving forward.  Julian Edelman had been a player who handled those duties but coming off of a significant knee injury, it’s safe to say the Patriots will likely play it safe and avoid using him in that role.  That leaves them with Cyrus Jones, who is coming off of his own injury and has struggled during his short career fielding punts.  If Jones has difficulty, Patrick Chung would be another logical choice but neither has the type of explosiveness Amendola has provided for them.

From there, the receiver group will most certainly suffer.  Amendola’s departure leaves them with Edelman, Brandin Cooks, Chris Hogan, Malcolm Mitchell, Phillip Dorsett and Kenny Britt on the depth chart which, on paper, is seemingly a pretty good group.  But Amendola was arguably one of the more versatile players on the roster and it’s been his presence that has been one of the key reasons why the Patriots have been able to weather injuries as they’ve lost key players in their offense at different points over the last few years.

But more importantly, Amendola is the number one reason why this team has won each of their two championships.  One of the biggest missing components in their previous failed Super Bowl attempts prior to his arrival is the fact that the Patriots were missing a player who could win one-on-one match-ups down the stretch in the postseason, especially as teams began to double their primary targets.  Previously New England made the error of bringing in aging veterans to round out their receiving group, who were all terrific in the regular season but were run down and ineffective in the playoffs.  Having someone like Amendola took them to another level and losing him is, unfortunately, going to present the challenge of trying to overcome that again now that he’ll no longer be with the team.

Personally, it breaks up a pretty tight-knit group that starts with Tom Brady, who on many occasions has made it clear how valuable he is to their offense.  From there, his bond with Edelman is well known and it’s probably going to be a tough adjustment for a trio that managed to win two titles together.

Terms of the deal are reported to be for 2-years for $12 million, $8.25 million of which is guaranteed.  At that amount of money, it’s hard to fault Amendola for the payday he’s more than earned.  He’s gone above and beyond and taken pay cut after pay cut, having more than been a team player in helping them build their roster during each of their championship runs.   While it will be painful to see him twice per season, the logic behind his decision makes obvious sense.

It’s tough to see him go, but he’ll leave fans with plenty of incredible memories and he’ll get some additional perks.  He’ll get to play his final seasons in a warm climate eight times a year and, knowing how the Dolphins are, he’ll likely now finally have more free time during the offseason to spend with girlfriend Olivia Culpo since he’ll probably have Januarys and February free.  So there you go. 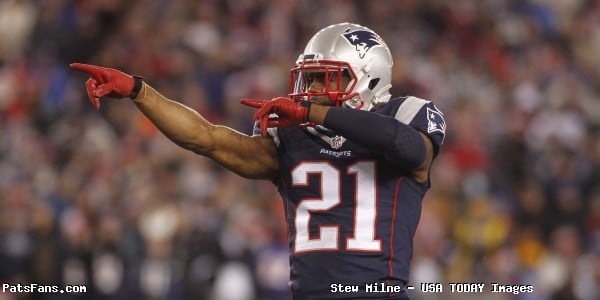 Butler finally got his big payday on Tuesday.


Butler Heading to Tennessee – Malcolm Butler spent much of last offseason extremely frustrated with his financial situation, but it’s safe to say that he’s a little happier one year removed from how things played out this time last year in New England.

According to NFL.com, Butler agreed to a five-year deal worth more than $61 million, including over $30 million in guarantees.

His departure marks the end of a storybook beginning and a nightmare finish, with Butler making his historic game-winning interception over the Seahawks when the Patriots won their first Super Bowl in a decade to cap off the 2014 season, only to be benched in his final Super Bowl with the team, which resulted in a frustrating loss to the Eagles just over a month ago.

Butler joins former Patriots defensive back Logan Ryan, who joined the Titans last offseason.  Ryan was supportive on Twitter of Butler when he was sidelined against Philadelphia, Tweeting “Why aint @Mac_BZ in the game??” and “#FreeTheButler”.

And Butler’s not the only player headed to Tennessee.

Adam Schefter of ESPN reported Tuesday night that Dion Lewis will be joining the Titans on a four-year deal, pairing him with Butler as two solid additions to a team that just turned the tables and poached them away from the team that knocked them out of the postseason less than two months ago.

According to Mike Garafolo, Lewis’ deal is for four years and worth $20 million, including an additional $3 million in incentives.

Dion Lewis’ deal with the Titans: four years, $20 million with another $3 million in incentives, source says

Lewis staying in New England seemed like a longshot, with multiple reports saying that competition for his services would be high.  Couple that with the fact Lewis reportedly wasn’t happy about how he was being used in 2017 as the team rotated running backs, and it left any possibility of keeping him heading into this week looking pretty grim.

They’re now left with the challenge of having to replace his production, with James White, Brandon Bolden and Mike Gillislee as their current options.  White has already established his role as a third-down back and a pass-catcher out of the backfield, but they lack another player at the position who can replace the 896 yards he put up last season carrying the football.

Here’s a look back at a highlight video posted by NFL Films back in January, which Lewis retweeted on his timeline.

After a tough break @DionLewisRB found a way to bounce back. Now, the @Patriots are Super Bowl bound. #GoPats@insidetheNFL #WireOfTheWeek pic.twitter.com/FN0z5tR8ND

Not “a lot of optimism” Solder Returns – It appears that the Patriots could be in need of a new left tackle in 2018, especially with the way the Nate Solder situation appears to be playing out.

According to NFL Network’s Ian Rapoport, the Giants and Texans appear to be the two team in the running for his services, with the money seemingly escalating out of New England’s price range. The Broncos were initially thought to be the favorites, but his price began to climb and it appears it pushed them out of the mix. That’s definitely a bad sign for the Patriots, and as a result, Rapoport reports that there’s not “a lot of optimism” that he’ll be back next season.

One free agent to watch today: #Patriots LT Nate Solder. As of last night, it sounded like #Giants or #Texans… and there wasn’t a lot of optimism that he’d return to New England.

That would be a tough blow for a team with not a lot of options behind him. Solder has been a solid addition since being selected in the 2011 draft, and his loss would certainly be significant.

The only good news is Solder has indicated he’d prefer to stay, but it’s going to be up to the Patriots to get creative and figure out a way to make it worth his while to stick around. With several key players already having moved on, we’ll have to wait and see how it plays out.

Nelson Released, Could he Land in New England? – With Amendola now headed to Miami, the Patriots have an opening for a precision route-runner and NFL.com’s Chris Wessling wonders if Jordy Nelson, who was released by the Packers on Tuesday, could find a home in New England.

“Danny Amendola is absconding to Miami with a new contract and Julian Edelman is coming off ACL surgery,” writes Wesseling. “If Nelson wishes to follow the well-worn path of ring-chasers to Foxborough, perhaps there’s mutual interest in a sure-handed wideout.”

Nelson is an interesting player, but the biggest problem he presents is the fact that he’s seemingly lost some of the speed and quickness that made him so effective in Green Bay after his knee injury suffered in 2015.  As Wesseling points out, Nelson’s yards-per-catch average plummeted from 15.5 to 13.0 to 9.1 over the last three seasons, which may give the Patriots pause in investing money in a soon to be 33-year old receiver who may become a liability should any of their top targets go down.

Nevertheless, the interest appears to be there on Nelson’s side. But whether or not the interest is mutual on the Patriots side remains to be seen.

I’m told Jordy Nelson knew he was being released and that he was already targeting the #Patriots as a potential suitor. Makes a ton of sense https://t.co/qMfQU9OXsd

Other Notes: Other notable AFC East News includes the addition of quarterback Josh McCown, who will also reportedly receive a 1-year deal. His deal is worth a reported $10 million…Also reportedly joining the Jets is Teddy Bridgewater, who is expected to sign a 1-year deal. The former Vikings QB is still making his way back from what was believed to be a career-threatening injury in 2016 and his addition would potentially create a pretty good battle for the Jets in the preseason, which is what they’re reportedly hoping for…The Jets also added defensive back Trumaine Johnson on Tuesday, with the two sides reportedly agreeing to terms on a deal worth a reported $15 million annually. He adds size and strength to a Jets secondary that ranked 21st against the pass in 2017…Also joining the previously mentioned players with the Jets next season is linebacker Avery Williamson. The now-former Titan is 26 and has been one of the team’s leading tacklers, giving the Jets another physical player on their defense…The Bills will reportedly add New Orleans Saints free agent safety Rafael Bush to a 2-year deal worth a reported $4.5 million. He appeared in 14 games with New Orleans last season, and doubles as a special teams contributor.

(Be sure and join our email list below, which includes the latest Patriots news and hand-selected articles from all the local media sources sent to you each morning.)