5 years ago at 7:44 am ET
Follow @SteveB7SFG
Posted Under: Patriots Commentary 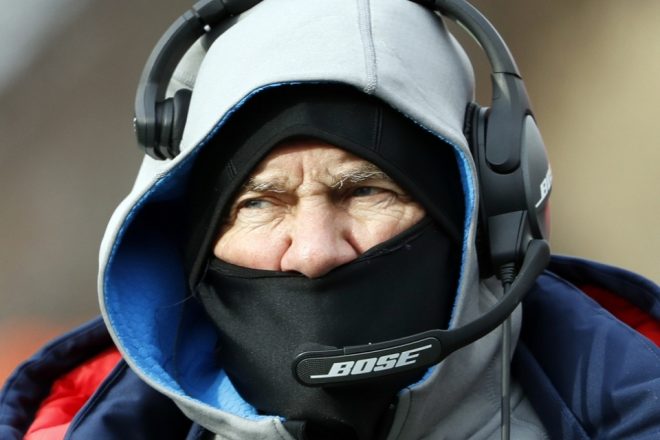 What a crazy week it was, we began the week with below zero temperatures in a deep freeze only to see Friday and early Saturday reach a balmy 60. Then by the time the game ended last night it was cold once again with single digit wind chills. Couple that with the Patriots playoff game and so little talk surrounding the game itself, it was indeed a crazy week.

However, when all was said and done, the Patriots are moving on to their seventh straight conference championship. That’s some rarified air folks. Breathe it in, enjoy it and ignore the noise.

Reports of the Patriots Demise Have Been Greatly Exaggerated:
Since the Patriots are indeed flying in that rarified air, there is no shortage of media people that can’t wait to be the first to say “the Patriots run is over”, and there is feuding among the top three of Brady, Belichick, and Kraft.

Well if you thought (or were secretly wishing for) this latest flap over nada to distract the team and throw them off of their game, you were sadly mistaken. They handled this like everything else and used it as a tool to bring themselves together and blasted the Titans into the offseason.

Next week, they’ll face a very good team either way between Jacksonville or Pittsburgh with the chance to go to the Super Bowl. And if they do fail, it will have zero to do with distractions, or in-fighting or worrying about who is the “Patriot of the Week.” This team is mentally tough and blocks out distractions better than anyone else.

Brady Continues to Amaze:
Speaking of wishful thinking, so many of these dweebs with their hot take shows have been predicting the end of the line for Brady for so long that it has become almost comical. I first heard these “he could be done as an elite QB” since the 2008 season when he tore his ACL. Ten years. The Brady funeral procession has been waiting for ten years and the beat goes on.

After all of the talk about his struggling December was all about his age and ignoring the fact that he was missing nearly half a dozen of his offensive players, once he got most of his players back he did what he’s always done. Made the naysayers pay. Right, Kevin Byard? He didn’t look like Blake Bortles last night nor was he afraid to test Byard in the middle of the field. When will they ever learn…don’t poke the bear.

Brady improved to an incredible 6-2 in playoff action when attempting 50+ passes. How is that incredible you ask? All other QBs attempting 50+ are a combined 3-28. Put that on a cliff. And thanks, Kerry Byrne for that stat.

How About that Patriots Defense?
It is amazing what you see on social media, the talk we’ve been hearing since September was that the defense was the Achilles Heel of the team and the lack of a pass rush/setting the edge in the running game was going to be the death knell of this team.

The run defense has been steadily getting better down the stretch and the QB pressure has been getting better and better and Matt Patricia doesn’t have that “marquee pass rusher” he and Bill Belichick have schemed a pass around the pieces that they do have.

And while the panic level around New England went thru the roof after the Titans went on their first touchdown drive, the coaches did what they always have done. They figured out what was wrong, adjusted and stuffed Tennessee until a total garbage time touchdown when the game was over.

Tennessee gashed the Chiefs for over 200 yards rushing the week before with Derrick Henry accounting for 156 of them. On Saturday night, that number was 65. And Henry, who was supposed to be the equalizer rushed for 2.3 yards per carry gaining just 28 yards. They took away Mariota’s running lanes in the passing game and the pass rush hit the Titans’ QB for eight sacks which is a franchise record.

Amendola is Money Once Again:
We’ve been unabashed supporters of the Patriots slot receiver. In the last two Super Bowl wins, he was right in the mix of things in each victory. No one has better hands and he has a nose for moving the sticks, finding the sweet spot in the coverage and always saves his best for the biggest times at crunch times.

One fact that escaped us last night was that Amendola has never had a 100-yard receiving game. Well not any longer. With the Patriots getting healthier on offense, Tennessee was busy trying to defend everywhere and that’s where Amendola steps in. He’ll never be “the guy” and he’s usually the third or fourth option for Tom Brady in many of these passing plays, but woe to the defense that ignores him. He caught 11 passes on 13 targets for 112 yards last night including a superb play by him and Brady for a key third-down conversion. Brady was flushed out of the pocket and threw across his body where Amendola made a tremendous leaping grab.

Every spring and summer, the rumors always have the Patriots cutting ties to the diminutive wide receiver, and every playoff run has us wondering “how could they get rid of this guy?”

Patriots Offensive Line Answers the Bell:
One of the other storylines this week was that big, physical Titans defensive line, doing what they did to Alex Smith and the Chiefs doing the same thing to Tom Brady, bringing pressure up the middle and shutting down the Patriots offense that “hasn’t been good all December” and “this could be 2010 all over again.”

It wasn’t for lack of trying. The charges of Dante Scarnecchia had a very good game on Saturday night. They picked up the A Gap blitzes, did a solid job of protection all night long and allowed zero sacks and just four QB hits.

Coaching Carousel Keeps Turning; Staff May Be Quite Different in 2018 :
The Patriots coaching staff and front office is always being looked at from other teams, trying to catch lightning in a bottle and emulate the Patriots success. And with both Offensive and Defensive Coordinators Josh McDaniels and Matt Patricia receiving serious consideration from two teams, it seems on the surface that both may soon be gone. Where does that leave the team in 2018?

Bill Belichick is always grooming, “the next man up” in the military tradition, he no doubt learned at Annapolis. He’s grooming the next guy to take the job. That’s the difference between successful coaches and unsuccessful ones. You don’t train your subordinates to follow but to lead. And the team should be fine on paper.

Both Linebackers Coach Brian Flores, as well as Wide Receivers Coach Chad O’Shea, have been being groomed to step into the coordinator positions if indeed McDaniels and Patricia depart. Both are highly esteemed inside the building although the true test for each will come when they actually step into the roles. One potential, albeit long-shot snafu that could arise, is if Flores departs also. He’s already getting some consideration as a head coaching candidate from the Arizona Cardinals. If he were to leave as well, then that might open up the position for an outsider.

But Belichick always likes to promote from within and keep that continuity, so that would be intriguing if it were to occur. One name to keep an eye on if that occurs, … Greg Schiano, not really an outsider per se as he an Belichick have always been close.

Gruden Lands in a Good Position to Thrive:
Jon Gruden leaving the ESPN Monday Night Football gig to return to coaching wasn’t a shock. Everyone who was close to him has stated that he is a coach, first and foremost and would eventually return to the coaching ranks sooner or later. Gruden was just waiting for the right spot. And he returned to the Raiders where he found success in the early 2000s.

A couple of years ago, he was interested in the Eagles coaching vacancy by Philly owner Jeff Lurie wasn’t interested in him, being out of the NFL for so long. But Mark Davis, the owner of the Raiders came calling with a boatload of cash and the rest, as they say, is history.

Gruden can coach, we’ve seen that with the job he did in Tampa with the Bucs. What he isn’t tremendous at is building a football team, as we’ve seen on the MNF telecasts, he loves everybody. But he doesn’t have to worry about that. He has a very good GM in Reggie McKenzie who has assembled some intriguing pieces around the roster for Gruden to work with. First of which is QB Derek Carr.

I can’t wait to see how those two interact and work around an offense that didn’t play to its full potential last year. The Raiders have some intriguing pieces on offense that seem tailor made for Gruden. That alone will keep the Raiders fans in the seats at the dump they play in until they make the move to Las Vegas. “Chucky Takes Las Vegas”…

Who Do You Like This Week NFL Divisional Weekend:
Wildcard Weekend Last week 3-1 mark.