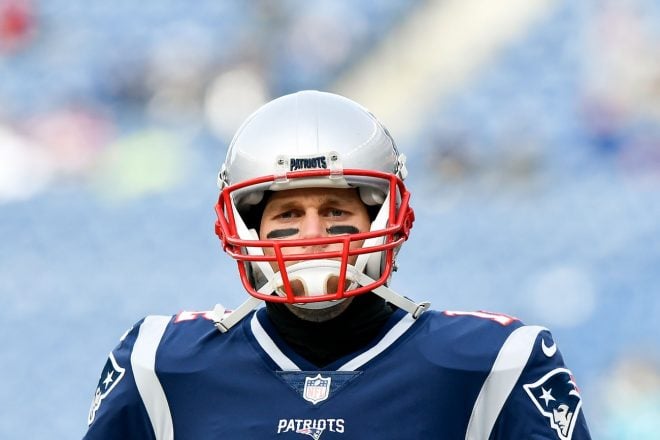 The New England Patriots return from the bye week to take on the Tennessee Titans in the Divisional Round of the 2017 Playoffs. The game will be played at Gillette Stadium in Foxboro, where if the team is successful this week, will be the place for the AFC Championship Game.

This week’s game will be broadcast by CBS on Saturday, January 13, at 8:15 p.m. ET and can be seen on WBZ-TV Channel 4. Jim Nantz will handle play-by-play duties with Tony Romo as the color analyst. Tracy Wolfson will work from the sidelines... The game will also be aired on the Patriots flagship radio station 98.5 The Sports Hub with Bob Socci and Scott Zolak on the call, produced by Marc Capello.

The Patriots (13-3) took care of business in Week 17 beating the Jets to end the season and had a much needed week off to heal up the many injuries that they have suffered this season.

The Titans (10-7) stormed back from a big 21-3 halftime deficit to stun the Kansas City Chiefs in the Wild Card Round 22-21. The team rushed for 202 yards with Derrick Henry accounting for 156 of them. QB Marcus Mariota completed a TD pass….to himself in one of the crazier plays you’ll see.

The Patriots and Titans are meeting for the 42nd time going back to the old days of the AFL and when the Titans were the Houston Oilers. Overall the Patriots hold a 24-16-1 edge. The Patriots have won the last six meetings including a 2003 season Divisional Playoff win.

The Patriots running game was firing on all cylinders until Rex Burkhead and James White went down with injuries. However, Dion Lewis has been simply outstanding in the second half of the season. Lewis will get the lion’s share of the work in the running game, even if both of those backs return.

The Titans are very stout against the run allowing just 88 yards per game. It starts with the big men in the middle, Sylvester Williams, Jurrell Casey and Austin Johnson. They’re big and physical and will make the going tough.

Look for the Patriots to pass to set up the run. The Patriots have run for more yards in the red zone in 2017 than any other team in the league. When they get down low, they like to run Lewis inside and catch teams in a pass rushing situation.

The Patriots passing game should get Chris Hogan, James White and maybe ….Burkhead back this week which will be a huge boost for the passing game.

The Titans can get after the passer and have 43 sacks, they also have the biggest ball hawk in All-Pro Safety Kevin Byard, but the two areas that they struggle in are the two are the Patriots strengths, covering running backs in the passing game and covering tight ends. They’re going to have to bring pressure up the middle if they’re going to slow down this passing offense.

Look for the Patriots to target Gronkowski and the backs early and often in this one. With the big men up front, the Patriots may try to keep them in their base look and then go hurry up to wear those big men down. If Brady has his full complement of receivers this week, this offense should easily have its way with Dick LeBeau’s defense.

Next up the Titans offense:

The Titans have the big man, Derrick Henry at running back and Marcus Mariota, who is a dual threat to run or throw. They averaged just over 114 yards per game on the ground. Demarco Murray has already been ruled out of this one with an injury so it will be Henry. He gets better as the game goes on, so if the score is still close late in the game, that’s when he’s at his most effective.

The Patriots run defense has had major issues this season defending the run especially on the edge but they’ll be getting Alan Branch back inside and the addition of James Harrison should really pay dividends. That means Kyle Van Noy, who is also returning from injury can move inside where he’s more effective.

The Titans are a run-first team, but they’ll want to mix things up and keep New England off-balance. But will Henry influence the game enough to tip the scales for the Titans? He’ll get his yards but the Patriots have gotten better against the run down the stretch. Shutting down the Jets and Bills on the ground.

The Titans have 3rd year QB Mariota who had a great 2016 but slipped badly this year throwing more interceptions than touchdowns. Tennessee has a talented group of receivers with Rishard Matthews, Eric Decker and Corey Davis outside and Delanie Walker at tight end. Walker led the team with 74 catches for 807 yards and three scores.

The Patriots struggled horribly in September against the pass but since then, things have tightened up considerably. The Patriots on third down have the fourth best opponent passer rating of just 76.8. The corners and safeties have tightened things up. Look for Pat Chung to battle Walker which will be a key area to watch. Harrison may add a bit to the pass rush for the Patriots who got 42 sacks on the season. Mariota averaged just 199.4 yards per game passing this year. If the Patriots get off to a quick start, the big question is, can he throw enough to keep up?

The Patriots’ Special Teams are among the best in the NFL, they excel in punt and kick coverage and continuously turn in big plays. Stephen Gostkowski had a very solid season and his kickoffs consistently put opponents deep in their own end. Ryan Allen is very adept at pinning opponents inside the 20 and the team has perennial Pro-Bowl ST player Matthew Slater on the coverage units.

The Titans punter Brett Kern led the league in punting average with 49.7 yards per punt and have Adoree Jackson on both their punt and kick return units.

Once again the key here from a Patriots perspective is to get off to a quick start. They haven’t been good at throwing the ball (23rd in the NFL) so they’re not going to be at their best if they have to throw and get away from the run.

With the Patriots getting most of their weapons back this week, look for Tom Brady to spread the wealth around and test this pass defense. Dick LeBeau’s zone blitz schemes are the same defenses that he ran in Pittsburgh. There is no mystery there for the Patriots or Brady. Will LeBeau mix things up and play more man coverage this week? That’s the big question here. If they sit back in a zone, the only chance they’ll have is if they get great pressure up the middle. Another key is ball security. With an offense that scores just about 20 points per game, the Pats can’t afford to give Mariota and the Titans offense short fields and easy scores. They have to feel pressure to score every time they get the ball in order to keep up.

Tennessee is at their best when the force the game into a physical slugfest where the score is a 17-14 type of game into the fourth quarter. Those are the games tailor-made for them to win. Mariota is a dual threat to run/pass but I don’t expect the Patriots to “spy” him with a linebacker. It will just come down to the players doing their job and the defensive ends not getting too far upfield.

Brady, Gronkowski, and Lewis will have big games this week and New England advances for the seventh straight year to the AFC Championship Game with a solid team victory as they pull away late.  Patriots 31-14