5 years ago at 7:58 am ET
Follow @SteveB7SFG
Posted Under: Patriots Commentary 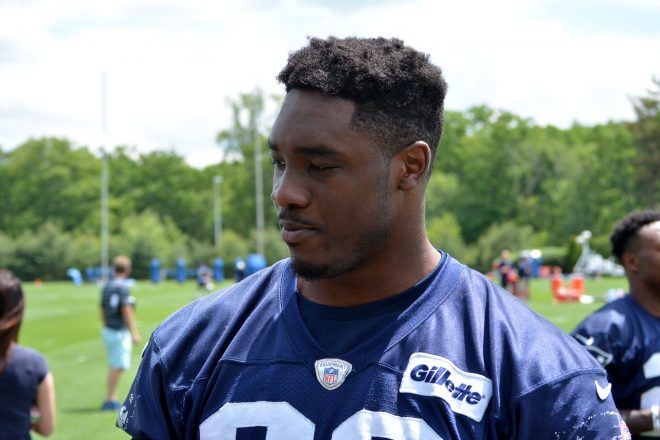 Game is beginning to slow down for the 2nd year DE

The Patriots are deep at defensive end in 2016 with seven players vying for reps and playing time. One of them, 2nd-year player Geneo Grissom, is looking to be as versatile as possible to not only stick on the 53-man roster, but to find as many reps on the field as well.

The Patriots made a couple of interesting selections in the 2015 NFL Draft. By selecting defensive ends Grissom and Trey Flowers in the 3rd and 4th rounds respectively, they turned a few heads because defensive end wasn’t considered a position of need. The team had Chandler Jones and Rob Ninkovich and had just signed Jabaal Sheard. Now, with Jones traded off to Arizona, the opportunities would blossom for the 2nd year players, right?

Not so fast. This spring right after trading Jones, the team brought in veterans Chris Long and Shea McClellin, which created a logjam at the edge rusher position. Rufus Johnson, who had a strong training camp a year ago, returns as well.

But having all of that depth now helps.  On August 9th, the first day of joint practices with the Saints, Ninkovich tore a triceps muscle and is expected to miss about a month. Losing a veteran like Ninkovich, who’s been so durable and productive, is never a good thing, but the team is in very good position to cope with veterans Long, Sheard and McClellin to lead the way. Now it is time for the younger players to step up and earn some reps.

Flowers, who had a strong camp a year ago, had a solid week of practice followed by a big game against the Saints. Now Grissom is looking to build some momentum.  He also chipped in with a sack against the Saints on Thursday night. The 6’4, 265-pound graduate from Oklahoma who is built like a power forward in basketball was lauded by Belichick after he was drafted as an athletic, versatile player who could fulfill a number of roles.

He made the team out of training camp but contributed only sparingly on defense, playing mostly on special teams. He notched six tackles and a sack while appearing in 14 games. 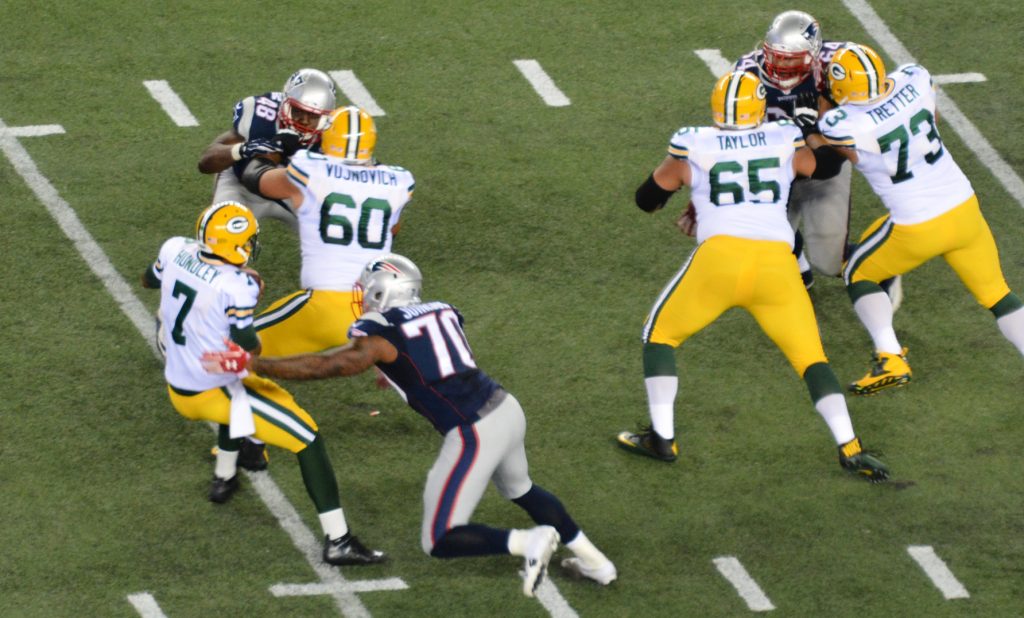 Grissom (48), Johnson with the sack

“Part of it is the understanding of the scheme. With them coming in a year ago, you see some of the athleticism, you see some of the physical skills,” defensive line coach Brendan Daly told the Worcester Telegram. “Rookies, just by the inherent nature of the situations, are behind from a mental standpoint. I think that’s the biggest thing you look at — how far have they come, the understanding. A lot of times that allows them to play faster and let their athleticism and natural ability show. We’re excited to see where that’s at.”

When asked if the game has started to slow down heading into his second year, Grissom said it has, but he still has work to do.

“Absolutely, although I have a long, long way to go,” the soft-spoken Grissom told me Sunday.  “I see the plays quicker now and instead of thinking about what my responsibilities are, I can just react and play. Which is a bit faster.”

One area that the Patriots utilized Grissom in was as an interior pass rusher as well as on the edge, an area where the chiseled, well-built player can not only hold up but use his power in a smaller window against the offensive linemen.

“Geneo did a lot of different things for us and improved through the course of the season,” Daly said. “You could see that growth from him mentally. Pleased with the way he works — comes in and works hard every day, he’s focused on getting better, he’s a team guy, willing to do whatever anyone is asking him to do.”

With a veteran like Long, to mentor the young defensive ends, I asked him how much a factor the mentoring was making in helping his game rise. “He’s been great,” Grissom said. “All of those guys (Ninkovich, Sheard, Long), are fantastic. It’s an honor to play with them and we soak up as much as we can.”

With the Patriots mixing things up on the edge this year, they’re already showing different looks and alignments, Belichick said they were installing different elements into the playbook this week and the defensive front is one area. 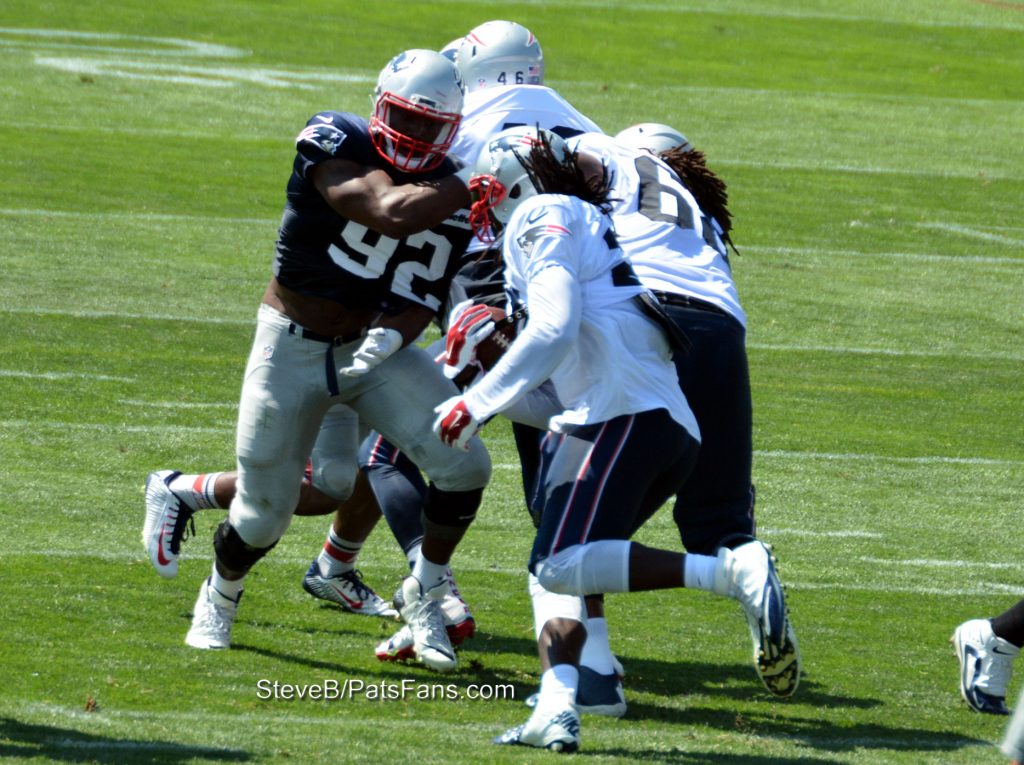 They’ve been mixing in the 4-3, 3-4 and 5-2 alignments. With McClellin and Ninkovich, the coaches can move them around as rush ends, or drop them into coverage covering the tight ends. They’ve used Long, Sheard, Flowers and Grissom both on the edge and interior pass rushers.

Grissom has even dropped into the flat to cover running backs, but is that an area that he feels comfortable with yet? “Ah, I’ll do whatever the team asks me to do,” he said with a smile. But it isn’t his strongest suit.

One area where he can make an immediate impact is on special teams. And what an impact he made during the first team scrimmage. On the initial kickoff, he pushed McClellin back into return V’Angelo Bentley and decleated him with a tremendous thud.

The athletic Grissom made another tackle of Bentley later in the session. With the new kickoff rules in effect with touchbacks being returned to the 25-yard line, Grissom may be called upon to handle the ball. During both the in-stadium practice and later during the team scrimmage last week, Stephen Gostkowski used the shorter, “mortar” kickoffs that fall well short of the goal line.

On both occasions, Grissom picked up the ball and during the scrimmage last week, made a nice return up the sideline. I asked him if he would look forward to running back a kick in a game situation. With a very Patriots-like answer he said with a grin, “Well, I’m just trying to prepare myself that if the situation does appear, I’ll be ready for it.”

After the joint practice against the Saints, Grissom spent about 10 minutes fielding kickoffs from the JUGS machine with Special Teams coach Joe Judge.

Grissom isn’t a lock to make the team and he still has plenty of work to do, but as Belichick himself said yesterday, “the more you can do, the more valuable you are.” While Flowers has the edge on him as a pure defensive end, Grissom brings the element of being a special teams core guy that can’t be discounted. That could end up with both of the second year players carving out a role.