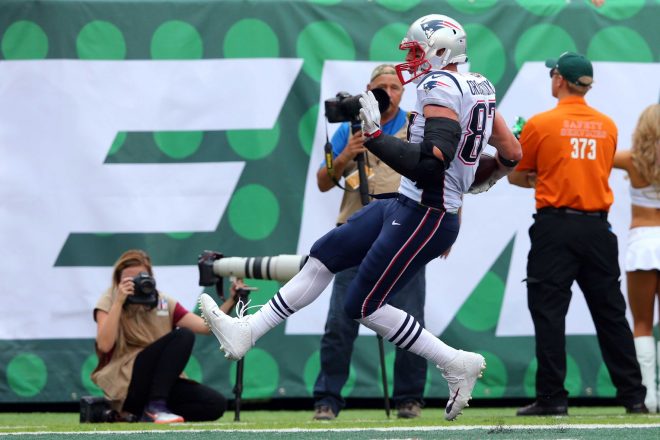 The New England Patriots finish off the 2017 regular season by taking on the New York Jets in Foxboro’s Gillette Stadium.

The teams have moved in different directions since the last time the teams met in Week 6. Both entered that game at 3-2 and since, the Patriots are 9-1 and are in line for the AFC’s top seed. The Jets are 2-8 since that matchup and are left looking for answers.

This week’s game will be broadcast by CBS on Sunday, December 31 at 1:00 p.m. ET and can be seen on WBZ-TV Channel 4. Jim Nantz will handle play-by-play duties with Tony Romo as the color analyst. Tracy Wolfson will work from the sidelines... The game will also be aired on the Patriots flagship radio station 98.5 The Sports Hub with Bob Socci and Scott Zolak on the call, produced by Marc Capello.

The Patriots (12-3) took care of business last week by defeating the Buffalo Bills 37-16. Dion Lewis rushed for a career-high 129 yards as the Patriots ground out nearly 200 yards on the ground. The defense held the Bills to just three field goals.

The Jets (5-10) lost to the Los Angeles Chargers 14-7 as they limp to the season’s finish line but still are playing hard for coach Todd Bowles. They’ve been in all of their games this season and looking to the future.

The Patriots and Jets are meeting for the 118th time. The Patriots hold a 62-54-1 edge overall. The Patriots are 33-25-1 all-time at home against the Jets. The Patriots have won the last three matchups and the past two wins by Gang Green have been in overtime. One of which was in 2015 with the famous “pushing rule” game which cost the Patriots home field advantage in the playoffs but wait, the Pats get all the calls right?

The Patriots running game has been steadily getting better as the season goes along and Dion Lewis has emerged as the Pats go-to back. Last week against the Bills, they were missing Rex Burkhead and James White, but Lewis and Mike Gillislee gashed the Buffalo defense for nearly 200 yards.

The Jets, like the Patriots, have had issues stopping the run and have allowed 116 yards per game. In the first matchup this season, New England ran for 125 yards. The key matchups will be how effective the Pats offensive line is at getting to the second level against a good linebacking core.

Lewis will be the main back again, however, with Burkhead on the shelf, Gillislee has missed practice time with a knee injury. If he’s unable to go, we may see more of Brandon Bolden this week.

The Patriots passing game is still missing a ton of key players with Chris Hogan, White, and Burkhead out. But the good news is Malcolm Mitchell is back and is slated to play some this weekend. He’ll no doubt have some rust issues but his return is very good news for the passing offense. Matching up with Rob Gronkowski has to be the Jets priority on Sunday. I’d expect to see him doubled this week.

The Jets have done a good job of defending the pass this year allowing just 237 yards per game. They’ve only had two teams pass for 300 yards or more against them this year. Their improved secondary begins with the two rookie safeties Jamal Adams and Marcus Maye who have come in and played much better than anyone could have hoped this early in their careers.Their biggest weakness remains, rushing the QB and if they give Brady time, he should have a big day.

Gronkowski had a big game with two touchdowns in the last matchup and the Jets will have to find a way to slow down the big man. It will be up to the other players on the offense to make them pay if they decide to double Gronk. Brandin Cooks will have to step up this week and make the Jets force coverage toward him.

The Jets have a very good running back in Bilal Powell and he is coming off a big game last week (145 yards) against the Chargers. Look for the Jets to test the edge of the Patriots defense which has been leaky for much of the season. Powell missed the first game and has usually played well against the Patriots.

The Patriots run defense has had major issues this season defending the run especially on the edge and they’ll be short inside with Alan Branch still out injured. But there are a couple of silver linings this week. Malcom Brown played arguably his best game of the season last week against the Bills and the Patriots just picked up James Harrison. The Steelers all-time sack leader is closer to the end of the road than the beginning but I think he’ll be looked to primarily help with setting the edge here. If he can do that, then his time here regardless of his pass rush ability, will be a success.
We don’t know how much he’ll play this week, but they’ll be a lot of eyes on him and we’ll be focusing on the running game first.

Josh McCown is out for the season and the Jets now have Bryce Petty under center. He has some good weapons in the passing game, Robby Anderson and Jermaine Kearse outside, tight end Austin Seferian-Jenkins and Powell out of the backfield. The problem has been protection this season. Jets QBs have been sacked 43 times in 2017.

The Patriots pass defense has been light years better since the first Jets matchup where McCown threw for 350+ yards. The secondary didn’t have a good week against Buffalo last week and will be looking to enter the postseason on a high note.

Look for Matt Patricia to be a bit more aggressive this week with Petty under center than McCown. We’ll see some safety or corner blitzes and some A-Gap pressure as well.

The Patriots’ Special Teams are among the best in the NFL, they excel in punt and kick coverage and continuously turn in big plays.

The Jets STs units are a step below the Patriots and don’t have the edge anywhere here. But they showed last week that they’ll be aggressive, starting off the Chargers game with a successful onside kick. Expect them to empty the tank this week.

This key here from a Patriots perspective is getting off to a fast start. Game time temps are slated to be 10-15 degrees with a wind chill below zero. The Jets, although they’ve played hard all year are playing for nothing but pride. If New England gets off to a quick start, they may just want to fold up tents and get home to watch the ball drop in Times Square.

Turnovers are key here as well. The Jets don’t have a prolific scoring offense so ball control and not turning it over is key here.They can’t give the Jets any short fields and any momentum to pull off the upset.

Look for the Brady and the offense to keep it varied, mixing in the pass and run equally and the defense to get a couple of sacks as well as a turnover of their own…or two.  Pats finish the regular season 13-3. Patriots 34-13

By: Steve Balestrieri
"the greatest player to play the game, it means a lot. And I think it means a lot to me, too, because this is where…
46 mins ago