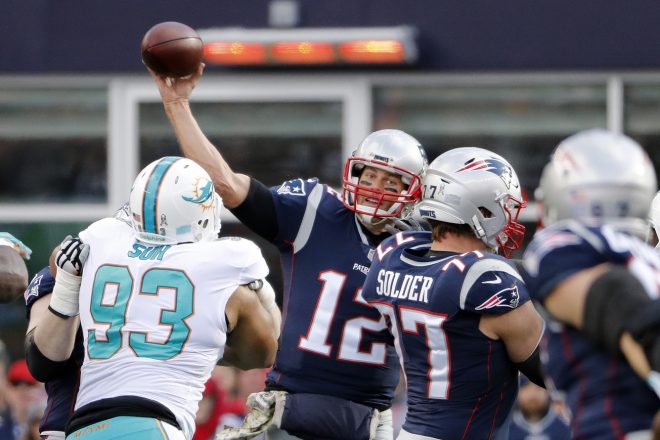 The Patriots go back out on the road for their fourth game in the last five as they take on the Miami Dolphins in South Florida on Monday Night Football. This is a hat and t-shirt game for the Patriots. With a win or a tie, the Patriots clinch the AFC East once again for the ninth straight time and the 17th since Robert Kraft took over the team in 1994.

This week’s game will be broadcast by ESPN on Monday, December 11 at 8:30 p.m. and can be seen on WCVB, Channel 5 in Boston. Sean McDonough will handle play-by-play duties with Jon Gruden as the color analyst. Lisa Salters will work from the sidelines.The game will also be aired on the Patriots flagship radio station 98.5 The Sports Hub with Bob Socci and Scott Zolak on the call, produced by Marc Capello.

The Patriots (10-2) are coming off a 23-3 blowout win over the Buffalo Bills in Orchard Park. The running game ran for nearly 200 yards while the defense for the eighth game in a row allowed 17 points or less.The Patriots secondary held Buffalo to just 82 yards passing

The Dolphins (5-7) are coming off of a 35-9 blowout win over Denver. The team snapped a five-game losing streak and are looking to get some consistency.

The Patriots and Dolphins are meeting for the 105th time overall with Miami holding a 53-51 lead all-time in the teams’ rivalry. However, the Patriots have won 12 of the last 15 meetings including the lone from two weeks ago where the Patriots rolled 35-17 behind 196 yards on the ground.

The Patriots running game has been steadily improving behind the tandem of Rex Burkhead and Dion Lewis. Two weeks ago against Miami, Lewis ran for 112 yards on 15 carries. They controlled the clock, the tempo and the line of scrimmage./

Miami has issues with the run with DE Andre Branch and DT Jordan Phillips having problems in the running game. If the Patriots see these two on the same side, look for them to run right at them. While they may not roll up 200 yards on the ground again, they should still find plenty of room to be more than a complimentary piece.

The Patriots passing game is averaging 292 yards per game, tops in the NFL. Tom Brady however, won’t have his top receiver, Rob Gronkowski in the game as he’ll be serving a one-game suspension. But…the team may get back Chris Hogan this week. He’s been at practice all week and if he’s able to go would signal a huge boost in the Patriots passing game outside the numbers.

Miami got after Brady with very good pressure from everyone across the defensive line in the first matchup. They’ll need an effort like that again because their best corner  Cordrea Tankersley could miss this week with ankle and knee woes. Without Gronkowski look for Brady to spread them out and try to use their quickness all over the field. They’ll try to get Brandin Cooks the ball in space and Hogan (if he plays) may get the chance to go deep on a few plays down the field. The backs will again be a major factor in both the running and passing games.

The Dolphins running game hasn’t been the same since they traded the freelancing Jay Ajayi to the Eagles. The carries have been shared between Kenyan Drake and Damien Williams, but Williams is dealing with a shoulder issue and may not go.

The Patriots run defense has not been good and was gashed pretty well by the Bills last week although the return of Malcom Brown should help things. But will the Dolphins have the depth to force enough leverage there? The feeling here is no especially if they find themselves falling behind again.

Miami will have Jay Cutler back under center this week. He’s a different player than Matt Moore, so we’ll probably see some more shots down the field. Jarvis Landry had eight catches for 70 yards in the first one and he, Kenny Stills, DeVante Parker with tight end Julius Thomas should be much more productive than they are.

The Patriots pass defense is playing tremendous right now. It is a possibility that we’ll see some of Eric Rowe on Landry this week as he has a bit of size, although Jonathan Jones matched up well with Landry in the first meeting.

Look for the Patriots to be much more aggressive against this beatable Miami offensive line again. They teed off in the second half and got six sacks. Cutler isn’t mobile and the Patriots may call down the dogs this week.

The Patriots’ Stephen Gostkowski is having an outstanding season. His kickoffs are pinning teams deep and the outstanding coverage units are smothering the opposition. The Dolphins have solid kickers but aren’t generating anything in the return game. The Patriots Special Teams has been scoring points, blocking kicks, and last time ran a fake punt for a big first down that set up a touchdown.

This one is a divisional matchup on Monday Night so, as we’ve seen all season, anything can happen. But unless the Patriots implode, I can’t see the Dolphins beating New England this week. However, the Patriots have traditionally not played well in the heat of Miami. It does help that this one is at night so that shouldn’t be a big factor.

Having No Rob Gronkowski is a big blow for the Patriots offense but if Chris Hogan is able to come back and play this week it will be a nice boost to the outside passing game. Look for the running game to continue their solid play and Brady to spread the Dolphins defense out. Miami may run the ball effectively, but I don’t see Cutler having a good night against the secondary. New England heads to Pittsburgh 11-2 setting up a big game next week.  Patriots 30-13