5 years ago at 9:13 am ET
Follow @IanLogue
Posted Under: 2018 Patriots Training Camp 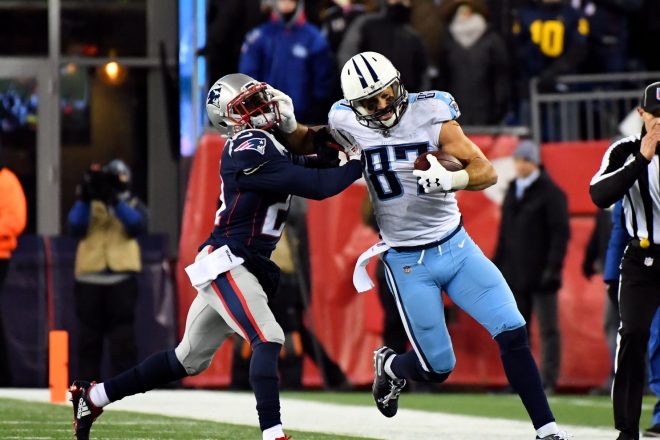 On the eve of the team’s first preseason game of 2018, here’s a look at this morning’s top stories.

Decker Happy to Be a Patriot – Veteran wide receiver Eric Decker spoke to the media for the first time since joining the team on Tuesday and was in good spirits, smiling and admitting he was happy to be a Patriot.

Decker said that it’s something he hoped would come to fruition and now he finds himself preparing to play in his first game at Gillette Stadium Thursday night.

“Very excited,” said Decker on being a Patriot. “You know, this is quite an opportunity. It’s a place really all offseason that I would have loved to end up and I’m kind of happy it worked out the way it did.”

So far one of the things that’s stood out to Decker is the impressive approach and attention to detail that goes into everything they do here.  Having played in both New York with the Jets and in Denver with Peyton Manning, being in New England has already opened his eyes as to why this team his so successful and he’s just trying to settle in.

“Well, they do it the right way,” said Decker. “There’s no question why they consistently win, why they’re consistently on top. Just the way they work. Every detail, everybody throughout the building does their job to the best. It’s quite fascinating to be a part of it and just trying to fit in.”

Decker said he was impressed by Brady for the same reasons, with Brady’s detail and the way he commands the huddle being things that stood out.

“He’s one of the best, if not the best. Just the way, again, he goes about his business,” said Decker of Brady.  “Detail, takes care of himself on the field, again, detail-oriented, commands in the huddle, pushes people, keeps you accountable. Things that you want in a leader and it’s been fun to be his teammate these last few days and kind of learn how he carries himself as a player and things that I can take and help myself.”

He’s still got a long way to go and he admitted that the biggest challenge remains understanding the offense and trying to help his new team win football games.

“It’s early. Again, trying to come in, trying to get to know my teammates, be a good teammate. Obviously work hard, know my role, my position – earn one and let it develop from there. I just hope to get an opportunity to play and help this team win.”

Belichick Speaks on Mitchell – Following the team’s decision to part ways with wide receiver Malcolm Mitchell, head coach Bill Belichick was asked about it by the media on Tuesday and he explained Mitchell did everything he could to get back on the field and it just didn’t work out.

Belichick explained that situations like these are tough, especially when it comes down to trying to make a decision that’s both best for the team and the player.  By letting Mitchell go, the team can focus on players who will be on the roster this season while also giving Mitchell an opportunity to catch on with another team that’s willing to continue allowing him to rehab and potentially have an opportunity there.

“I’ve talked to players about that and talked to them about their situation, and whenever possible, we try to come to the best mutual decision. That’s not always possible, but when it isn’t, we try to create a situation that’s the best we can make of that situation. So, making the best of a bad situation if that’s what it is – that’s how I try to approach it.

Mitchell posted a good-bye message to fans following his release and hopefully he’ll be able to have another opportunity elsewhere to resume his career if he is finally able to get healthy.

Patriots work out CB Breeland – The Patriots did a little due diligence on Tuesday, with Ian Rapoport reporting that the team worked out free agent cornerback Bashaud Breeland.

Breeland appeared in 15 games last season, finishing the year with 50 tackles along with an interception.  His lone pick came during their Week 14 match-up against the Chargers, which Breeland took back 96-yards the other way for a touchdown during garbage time of a 30-13 blowout loss.  He also finished the year with 19 passes defended.

He’s an interesting player, but a quick look at some video showed that he had a tough time the week before going up against some good competition.  Washington faced Dallas prior to their match-up against the Chargers, with Breeland (#26) getting some reps against Dez Bryant.  You can check out the video below, which includes a touchdown by Bryant where he made a ridiculous catch after Breeland never turned around and even interfered with him.

The former standout at Clemson is in his fourth season after being selected by Washington in the 4th round (102nd overall) in the 2014 draft.

More Players Come off PUP – Jonathan Jones, Cyrus Jones and Nate Ebner each came off of PUP on Tuesday and participated in practice, which is a good sign as the Patriots no longer have anyone left with that designation.

Each player participated in Tuesday’s session, which was a full pads practice as they continue getting ready for the upcoming season.  The three had previously spent much of their time working on conditioning, with Tuesday allowing them to finally start participating with their teammates for the first time this preseason.

Now that he’s back, Cyrus Jones will be an interesting player to watch after a rough start to his career saw him lose a shot at redemption last season thanks to a knee injury that ended his year before it ever got started during last year’s preseason match-up against the Giants.  The former second-round pick out of Alabama reportedly suffered a torn ACL and a partially torn MCL as a result of the injury.

Either way, the fact that guys are working their way back is a positive sign and will remain something to monitor over these next few weeks.

READ NEXT:
What to Watch For, Patriots – Washington Preseason Opener
Posted Under: 2018 Patriots Training Camp