2 months ago at 10:24 am ET
Follow @IanLogue
Posted Under: Patriots News 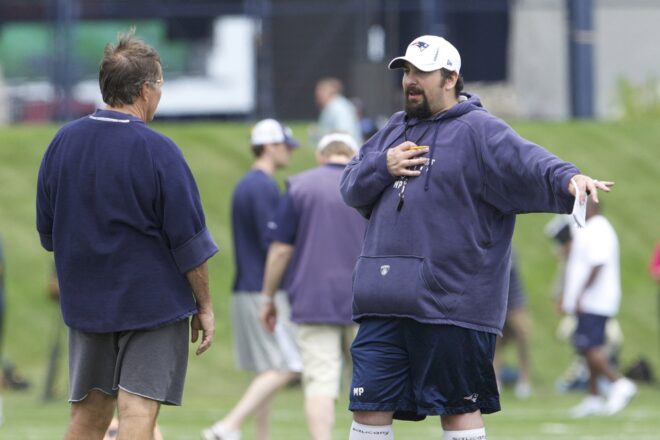 – The New England Patriots announced a later training camp start time, with the team’s website showing today’s practice scheduled for 4pm ET.  The same appears to be true for Tuesday as well, which is unusual but it appears that they could be working on some things internally prior to taking the field later on in the afternoon.

– The team is coming off of their in-stadium practice at Gillette Stadium that was held Friday night, which saw a competitive showing from the players who took part in front of season ticket holders.  There was reportedly plenty of energy during what was an overall productive evening as the team continues getting ready for the upcoming season, with their first preseason game set for Thursday night against the Giants.

– During Friday night’s session, both Matt Patricia and Joe Judge each got work in calling the plays, with Patricia calling the offense for Mac Jones and the first team, with Judge calling the shots for Bailey Zappe and the back-ups.  Patricia has seemingly been the guy in charge of that role to this point and he appears on track to potentially be the one who will also hold those duties heading into the regular season.

– The first glimpse of New England’s offensive line for the upcoming season was on display during the event, with Trent Brown (left tackle), Cole Strange (left guard), David Andrews (center), Michael Onwenu (right guard) and Isaiah Wynn (right tackle) rounding things out.  Wynn’s transition to that side continues as that’s where he’s seen most of his work since camp began, and barring any changes, it appears that’s where he’ll likely be lining up by the time the season begins.

– On the other side of the football, one interesting note was the fact that Anfernee Jennings, Raekwon McMillan and Ja’Whaun Bentley were the first-team linebackers on Friday night, with Mack Wilson and Josh Uche also seeing time within the rotation.  Matt Judon reportedly missed the session, which opened up some additional reps as Bill Belichick and the coaching staff continue making evaluations.

– Another interesting sighting was the fact rookie Marcus Jones  saw time with the starters, with Jones reportedly rotating into the first-team secondary.  The defensive back spent time in the slot alongside Jonathan Jones, as the athletic standout from the University of Houston get his feet wet during the club’s first simulated game action.  Jones has also seen a lot of action in the return game so far this training camp and is expected to potentially be in the mix for that role heading into the season.

– N’Keal Harry can’t seem to catch a break, with the former Patriots receiver’s training camp with the Chicago Bears seemingly already over before it really got started.  Harry reportedly suffered a high ankle sprain that ESPN’s Jeremy Fowler reports appears to be “severe” after initial evaluations.  Harry reportedly hurt the ankle during a practice on Saturday that saw him have to be helped off the field by trainers.  This time of year hasn’t been kind to Harry, with Patriots.com’s Evan Lazar pointing out that Harry has been injured during preseason in three of his four seasons, with Harry also dealing with an ankle injury in 2019, as well as a shoulder injury in 2021.

– Former Patriots offensive coordinator Bill O’Brien said over the weekend that the reason why he’s remained at Alabama instead of potentially returning to the NFL was due to the fact he had made a promise to head coach Nick Saban and he planned on honoring it.  “I made a commitment to Coach Saban,” O’Brien told Mike Rodak of AL.com.  O’Brien also said that his experience at Alabama has been “amazingly invaluable” and  he’s grateful for the opportunity.  “I love coaching here,” said O’Brien.  “The players, the coaching staff, it’s been — like I said in the opening statement here — it’s been a really good experience. I’ve learned a lot. I’m very appreciative of Coach for giving me this opportunity.”

– Former Patriots defensive lineman Richard Seymour was inducted into the Pro Football Hall of Fame this weekend, with Seymour on hand for the ceremony on Saturday in what was an emotional day for him.  With tears in his eyes, Seymour said he was overwhelmed and called it a privilege to receive the honor.  “I’m overwhelmed today with humility not because of what this moment says about me, but what this moment says about ‘we’ and what ‘we’ can do together,” said Seymour. “I’m overwhelmed with gratitude because I didn’t get here alone, none of us did. None of us could have. Class of ’22, they say you can judge a man by the company he keeps, I couldn’t be among better company than you. It’s a privilege to have my name bound forever with yours in the Pro Football Hall of Fame.”  Seymour spent 8-years in New England after being selected 6th overall in 2001 before being traded in 2009 to the Oakland Raiders for a first-round selection.  The trade left Seymour “blindsided”, which led to questions about whether or not he’d report before the full details came to light, which revealed he had family details to work out prior to heading to his new team.  It was definitely a surprising move, with Seymour going on play four seasons with the Raiders before retiring after the 2012 season.

By: Steve Balestrieri
Goff has been lighting it up this year (11TDs, 3 INTs) and has plenty of options to pick from, even being short-handed.
11 hours ago

By: Mark Morse
Coach Dan Campbell has the Detroit Lions working hard and together as a team despite a rash of injuries.  Don’t dismiss their 1-3 record.
11 hours ago