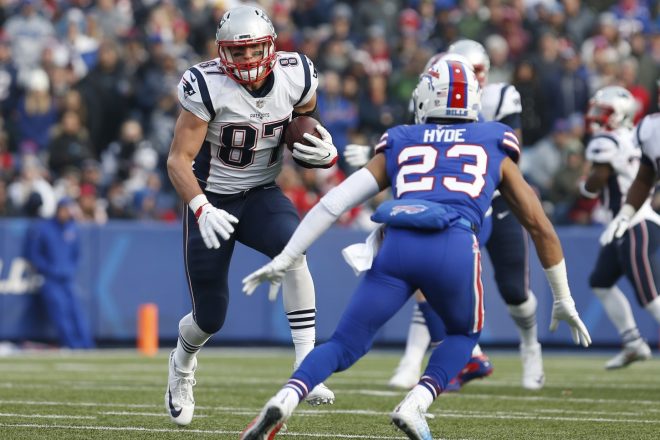 Rob Gronkowski isn’t known as a player who loses his cool, and after Sunday’s game he wasn’t pleased with himself for letting his emotions get the better of him.

The play happened in the fourth quarter after Gronkowski put a hit on Tre’davious White after an interception.  The veteran tight end felt he was held on the play and Gronkowski, who at that point was already frustrated after having been called for three penalties before the play, put a hit on White after he came down with the turnover, driving his forearm into the back of his helmet while also landing on top of him.

What the hell are you doing, Gronk? pic.twitter.com/mZTgJA62eU

White was slow to get up after the play, which also resulted in an Unnecessary Roughness penalty that was offset by one from Buffalo’s Micah Hyde.

Gronkowski, who will likely face a penalty for the hit, didn’t play another snap after the incident and was remorseful for it after the game.

“First off I definitely want to apologize to #27.  I’m not in the business of that,” said Gronkowski.  “I mean, there was a lot of frustration – I was just really frustrated at that moment, it just happened naturally through emotions and frustration.  So I just want to apologize to Tre’davious White.  I don’t really believe in the types of shots like that.  But just due to frustration, football emotions, that’s what happened.”

Gronkowski admitted that he was frustrated by the fact there wasn’t a flag after he felt he was pushed prior to White making the play.

“I felt like he kind of pushed me a little bit and made the play, and I just don’t understand why there wasn’t a flag,” said the visibly upset tight end.  “And there were a couple of times [like that] in the game.

‘They’re calling me for the craziest stuff ever.  It’s like, crazy.  I mean, what am I supposed to do?  And then they’re going to call that?”

Gronk does have a point. He and White battled all day and there was a lot of contact, which you can see one example in the play below.

Rob Gronkowski has his sixth career 100-yard game against the Bills. pic.twitter.com/Sstcmn0ty8

Despite the penalty, Gronkowski still put up 147-yards on 9 receptions, which was a season-high, eclipsing the 116-yards he put up against New Orleans back in Week 2.

Gronkowski and the Patriots will see the Bills again, as Buffalo will come to New England in a few weeks on Christmas Eve.