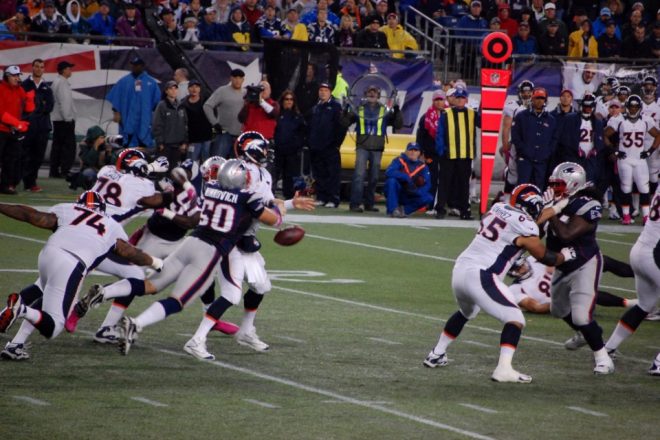 Since their week five bye the Broncos have been in a free fall with no end in sight. First there was a 13-point loss to the Giants, giving Big Blue their only win of 2017. That was followed by a shutout loss to the Chargers, then a five-turnover debacle against KC. Last week the one strong point for Denver, their defense, allowed 51 points. It was the most points allowed by the Broncos since 2010. On top of that the 28 point differential was the worst for Denver since the 2011 season of Tim Tebow.

There are plenty of other games worth watching as well. In the early time slot Minnesota is at Washington, and the Saints travel to Buffalo on a six-game winning streak. Then in the late afternoon time slot Dallas travels to Atlanta without Ezekiel Elliott. Roger Goodell wanted the NFL to have 12-month headlines, but these questionable suspensions and subsequent court cases are crushing the popularity of the sport. The week wraps up with Miami at Carolina on Monday night.

Most of the country will get Pittsburgh at Indy early on CBS. Fox has the early time slot split between the Saints-Bills in the east, and Minnesota-Washington in the west. The Pats-Broncos game is available most everywhere, though Hartford is stubbornly (and stupidly) opting to air the Giants game instead. smh…. For a full list of announcers and to see what games are being broadcast in your are, please check JP Kirby’s 506 Sports.

It would be no surprise whatsoever if the Pack finishes the season in last place in the NFC North. Perhaps then they can use their early draft picks to shore up that Swiss cheese offensive line. Here’s a question: will Brett Hundley be able to make the roster on a CFL or Arena league team in 2018?

Cincinnati has given up 25 ppg over the last three weeks, losing two of three since their bye. Two of those games were against Jacksonville and Indianapolis, neither of which are offensive juggernauts. More alarming was the Bengals regression on offense last week, with a mere eight first downs and seven points scored.

The Saints are overdue for a letdown loss, but will it come now? Here is dome team playing outside up north in the last half of the season against a team coming off an embarrassing loss. I just don’t think that the Bills can keep up with the New Orleans offense though. The Saints have a balanced attack and are playing complimentary football. That is something they have lacked since winning the Super Bowl eight years ago. Logically the Saints win, but I’m taking the Bills to bounce back in a slight upset. Buffalo wins their fifth straight home game.

Pittsburgh has a tendency to play down to the level of their opponents on the road. That doesn’t mean the Colts will pull off the upset though; they are still awful. Indy has an atrocious minus-98 point differential already. To place that in perspective that is worse than even the one-win Giants, or the winless Browns and Niners.

RB Leonard Fournette will have fresh legs after three weeks off. He faces a Charger run defense that is allowing 4.6 yards per carry (28th) and 135 yards per game (31st). The Jacksonville defense is for real, allowing an NFL-best 14.6 points per game.

Tampa Bay’s defense has been a sore spot all season. The Buccaneer defense generates no pass rush, with a league-worst eight sacks on the season. That has resulted in 7.9 yards per pass attempt (28th) and 24.8 points per game (26th). Give journeyman QB Josh McCown enough time and he will avoid critical mistakes and do just enough to win.

The Cleveland defense has actually played well this year. The Browns are allowing only 2.9 yards per rush (1st) and 4.9 yards per play (8th). The offense though ranks at or near the bottom in nearly every statistical category. Detroit may be inconsistent, but they have far more talent and should win easily.

This would have been a really great game to watch. Unfortunately it’s Tom Savage at QB rather than DeShaun Watson, and JJ Watt and Whitney Houston are sidelined as well. The Rams put up 51 points last week and now have to be considered a genuine contender to represent the NFC in the Super Bowl. QB Jared Goff’s numbers through eight games: 2,030 yards passing with 13 TD against only 4 INT. Goff also leads the NFL with 8.3 yards per pass attempt and 13.8 yards per completion.

The Dallas offense has been clicking, and the Atlanta defense has been missing. The Cowboys will be without RB Ezekiel Elliott however. Perhaps more importantly all-pro LT Tyron Smith will also be inactive due to a groin injury. Atlanta needs to get their offense back in gear to keep their playoff hopes reasonably alive.

Week after week I keep picking Santa Clara to win a game. Week after week the Miners find a way to snatch defeat from the jaws of victory. Now they host Team Turmoil, traveling three time zones. The G-men have given up on their season and their coach is Dead Man Walking. The legend of Jimmy Garoppolo in the City by the Bay commences. Only masochists would tune in to watch a game between two teams with a combined 1-16 record.

New England fans are rightfully going to temper their expectations based on the Patriots history in Denver. The Broncos have not looked good since their week five bye. Denver has lost four straight, turning the ball over 13 times in that span. To win they will need their defense to come through against a Patriot offense that is without WR Chris Hogan (shoulder). Danny Amendola has been playing through a knee injury, so the Pats could rely more on James White in the passing game. The Broncos can’t focus on stopping both Rob Gronkowski and the Patriot running backs at the same time. Brock Osweiler and the Denver offense will make a critical gaffe or two against Matt Patricia’s defense.

Continuity on offensive lines is a key to productivity. Miami will make two changes to their OL this week, adding LG Ted Larsen but losing RT Ja’Wuan James. That could be problematic against a Carolina defense that is allowing only 17.7 ppg.

For a sneak peak at next week’s games, check out NFL Week 11 Early Advanced ‘Look-Ahead Lines: Patriots favored by 6 vs Raiders in Mexico City.