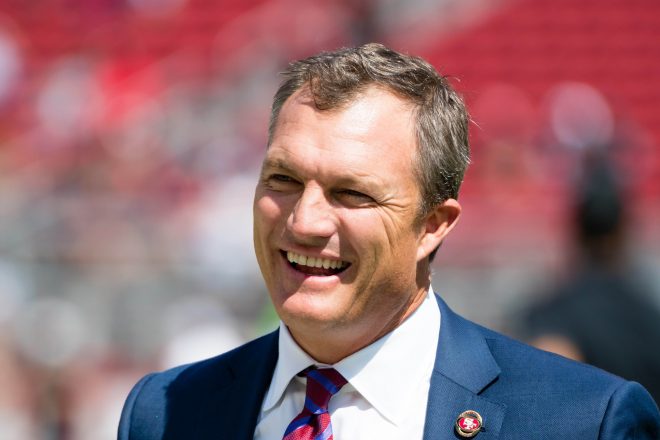 The New England Patriots made headlines last week before the NFL’s trade deadline when they sent backup quarterback Jimmy Garoppolo to the San Francisco 49ers for a second round pick, but it was a trade that didn’t happen that had the internet buzzing Sunday during the teams bye week.

According to FOX Sports’ Jay Glazer during the “FOX NFL Sunday” telecast, 49ers GM John Lynch made one of the more bold trade suggestions to Patriots head coach Bill Belichick this past spring during his first attempt to accquire Garoppolo, which was at the time rebuffed.

During Monday’s scheduled appearance on WEEI radio’s “Kirk and Callahan” morning drive program, Brady was asked about the newly released story and his thoughts about the possibility of being traded out of Foxboro.

“The best thing you can do as a player is just play well. If you do that, I am sure there is some team out there that will want you. When you think about playing well, that is what you try and do and you do well for the team I have been on for a long time. I have always tried to approach it the same way. I just try and do the job the best I possibly can. Show up every day with a good positive attitude, try and lead the team and we try and win games. I have been very fortunate to be part of a great organization that focuses on those things too. None of that has changed.”

How Was This Article?
Posted Under: Patriots Commentary
Tags: Jimmy Garoppolo Tom Brady