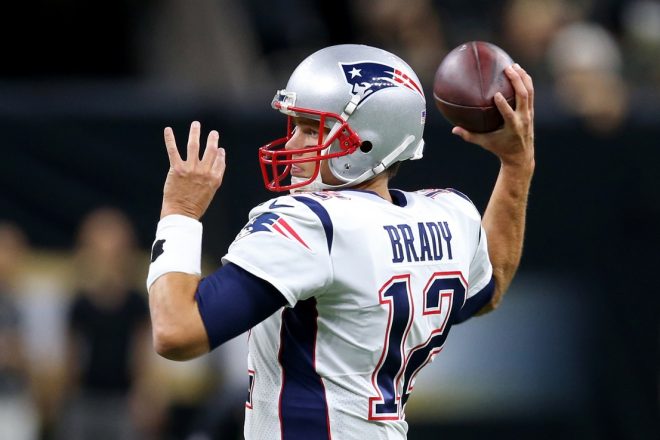 The New England Patriots head back out on the road to meet the Tampa Bay Buccaneers in a short week after Sunday’s games.

This week’s game will be broadcast by CBS on Thursday, October 5 at 8:25 p.m. ET and can be seen on WBZ-TV Channel 4. Jim Nantz will handle play-by-play duties with Tony Romo as the color analyst. Tracy Wolfson and Jay Feely will work from the sidelines... The game will also be aired on the Patriots flagship radio station 98.5 The Sports Hub with Bob Socci and Scott Zolak on the call, produced by Marc Capello.

The Patriots (2-2) came back from a late 4th quarter two-touchdown deficit to tie the score at 30 behind a tremendous performance by Tom Brady,  only to have the Panthers drive down the field and win the game on a last second 48-yard field goal.

The Buccaneers (2-1) beat the New York Giants 25-23 as Jameis Winston threw for 332 yards including a 58-yard touchdown to tight end O.J. Howard. The team also gets back Doug Martin from suspension this week.

The Patriots and Buccaneers are meeting for the ninth time. The Patriots hold a 6-2 overall advantage and a 3-1 edge in games played at each home stadium. Although the 2009 Bucs “home” game was played in London. The teams haven’t met since 2013 when the Patriots beat Tampa Bay 23-3 in Foxboro.

The Patriots running game is still mired in neutral averaging just 95.5 yards per game. The offensive line hasn’t been opening enough holes for the running backs to get anything going. Mike Gillislee had a pretty decent game last week but due to New England being down by two scores, they didn’t run the ball as much.

It seems like the team is limiting the carries of Dion Lewis as they really need him to be the kickoff return man. But maybe on a short week he could see some extra work. Rex Burkhead’s status is probably doubtful to play in this week, they could use him in this one.

The Bucs are doing an excellent job against the run, allowing only 72.5 yards per game. They have a stout front seven anchored by Gerald McCoy, Robert Ayers, and rookie linebacker Kendall Beckwith. However with LB Kwon Alexander out and LB Lavonte David, and safeties T.J. Ward and Keith Tandy questionable with injuries that could change things a bit.

This would be an excellent time for the Patriots to get the ground game untracked. Giving Tom Brady and the passing game more than just a semblance of a running game would make the passing attack that much more effective. But this looks to be another week where they’ll have to pass the ball to run effectively.

The Patriots passing game, despite Tom Brady being sacked and hit far too much, is off to a tremendous start of the season. Brady is spreading the ball around to a plethora of receivers including Brandin Cooks, Chris Hogan, Danny Amendola, and Phillip Dorsett on the outside, Rob Gronkowski at tight end and James White and Dion Lewis out of the backfield. Brady is completing 66.5 percent of his passes for 1399 yards with ten touchdowns and zero interceptions.

The Bucs, like New England, are allowing a lot of yardage passing. Noah Spence with their pass rush has just a single sack thus far on the season. They have a pair of good corners in Brent Grimes and Vernon Hargreaves who will try to take away the short, intermediate throws and force Brady into going deep. McCoy will be the guy to watch inside, creates outstanding pressure up the middle and that more than anything can get Brady off of his spot and prevent him from stepping into his throws.

Depending on the health of Rob Gronkowski, this looks to be a big week for him. I look for Brady to try to establish mismatches with Gronk both down the seams and split outside if the Bucs are in single coverage. Look for the backs, James White and Dion Lewis to be involved in the passing game a lot this week.

Next up the Tampa Bay offense:

Tampa’s running game has really missed Doug Martin as they’ve rushed for just 71.5 yards per game. The main man has been Jacquizz Rodgers but he’s more of a third-down back. It isn’t known how much if at all Martin will play. The Patriots will assume he’s going to play and prepare according. They’ll mix their formations a lot but I think we’ll see quite a bit of “12” personnel, with 2 WRs, 2TEs, and an RB.

The Patriots run defense has been poor allowing nearly 133 yards per game. They really need to move Dont’a Hightower back inside at the middle/inside linebacker role. It will accomplish two things. It will solidify the run defense and get the communication right down low. Alan Branch has been MIA for several weeks. In trying to stop the run and make the Bucs one-dimensional, he could be a bigger factor this week.

Winston has made tremendous strides this season, going from a middle of the pack QB in terms of numbers to a top 10 starter this season. He’s completing 63 percent of his passes with six touchdowns and three picks with a passer rating of 94.8. He’s averaging 277 passing yards per game this season. The addition of DeSean Jackson, though he hasn’t really clicked…yet, has allowed the big Mike Evans to get off to a great start. Evans, 6’5, is open even when he is blanket covered as Winston can just throw it up there for him. Eric Rowe is out for this one, (not surprising) after retweaking his groin injury on Sunday.

Tampa has two good tight ends in Cameron Brate and O.J. Howard. Brate is more of a receiving threat and has been productive with 10 TDs since last season. Howard had a 58-yard touchdown reception against the Giants. Rodgers is a good third down back out of the backfield.

The Patriots pass defense has been nightmarishly bad this season. The communication has been terrible, the blown coverages and terrible mental mistakes have been inexcusable. What was supposed to be the strength of the defense is approaching historically bad numbers. The pass rush has been inconsistent, however, it isn’t the reason for this unit to play this poorly.

Winston has shown the ability to escape the rush and will be looking to make the big plays (see Jackson) that have plagued the team all year. The two tight ends will be a load to cover. Look for Matt Patricia to simplify things, even more, this week. If I am Tampa, I’d run bunch formations all night long until they show the ability to not allow anyone to run free.

The Patriots’ Stephen Gostkowski had a big day kicking three field goals including a career long 58-yarder on Sunday. His pooch kickoffs have given the coverage units time to get down the field and stop opponents from reaching the 25 and many times the 20 yard line. Ryan Allen hasn’t been his usual self yet this season although he’s been good at directional punting. The coverage units have been very solid.

Tampa has a solid kicker in Nick Folk and in punter Bryan Anger. They too have had good solid coverage. They have the diminutive but explosive return man in Bernard Reedy. But this is the week I believe that the Patriots are going to get a big return from either Dion Lewis or Danny Amendola.

This one has the makings to be a shootout. Neither pass defense has been standout yet this season and with two good QBs and talented wide receiver cores, the score could go into the high thirties. Since Sunday I’ve had this one chalked up as a loss. Losing on the last play of the game after playing poorly…at home no less. The signs are there for the Patriots to fall below .500. This was one of the games I had circled for a possible loss when the schedule came out.

However, we’ve seen this before. Whenever the chips get low and things are looking down, is when Tom Brady elevates his game the most. The Patriots offense is capable of exploding as much as anyone. And we’ve really yet to see that yet for a 60-minute game. A shootout may actually benefit New England. Winston is still a young QB and is still prone to the occasional interception. When he’s forced to throw a lot is when his pick ratio increases. But the secondary isn’t going to be able to let receivers run free.

The Patriots will have to weather the storm. Tampa is a quick starting team. If they can hang with them through the first quarter, things should go their way as the Bucs have been outscored in every quarter but the first.

Brady wills the Pats to a big win on Thursday night with another epic performance as he and Wintson light it up.  Patriots 38-35