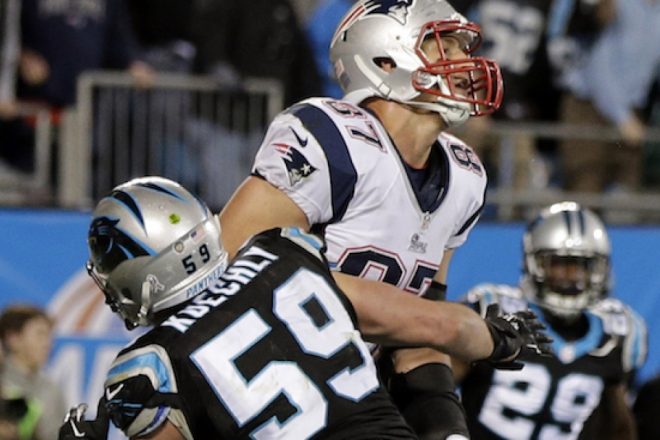 Patriots Take on Panthers At Home This Time

The Patriots play in their third home game in Week 4 when they take on Cam Newton and the Carolina Panthers. As hard as it is to believe, the season will be a quarter of the way over by Sunday evening after the game. Time flies by when you’re having fun I guess.

The Panthers suffered their first loss of the season, a 34-13 crushing loss to the previously winless New Orleans Saints. The Panthers defense, as always, is very solid but the offense has been really struggling. And now already with All-Pro TE Greg Olsen, the Cats passing game may be minus the very talented Kelvin Benjamin for this one as he was injured during the Saints game and is questionable to play this week.

Carolina breezed thru 2015 with a 15-1 record and went to the Super Bowl. But last year they scuffled through a 6-10 season and went from first to worst. Now they’re trying to put the pieces back together and ride the surgically repaired shoulder of Newton back to the playoffs.

Here are our Five First Impressions of the Panthers::

Team Captains Meet With Richardson to Clear the Air re: “Protests” : With the flurry of protests around the NFL after the tweets by President Trump, the Panthers players were unsure of how to proceed. Their owner Jerry Richardson has been critical of the protests which he’s characterized as  “politicizing the game is damaging.” And he didn’t release that until Monday.

One of the Panthers’ players Captain Munnerlyn said in an interview with ESPN, “People was kind of scared to express that because of how it made it look to [Richardson]. We didn’t do much as a team. I think we wanted to do more, but we didn’t know how it would come down, this being North Carolina. … I think a lot of people were scared on our team.”

The Panthers Are Hurting Like NE on the Injury Front: The Panthers will be missing one of their star players in tight end, Greg Olsen, this week. He broke his foot earlier this year and was placed on IR. He’s expected back sometime in November. But he is far from the only Panther banged up.

QB Cam Newton still isn’t 100 percent since having off-season shoulder surgery. He’s still getting his arm back to where it was and probably won’t be close to his normal self until midseason. WR Kelvin Benjamin injured his knee last week and left the game. If he can’t go on Sunday, it will be a big blow to the offense. He didn’t practice on Wednesday but was present and was riding a bike. Other players who missed practice Wednesday include  Julius Peppers, Ryan Kalil, Jeremy Cash, Thomas Davis, Daryl Worley and Star Lotulelei. Peppers and Davis were given a veterans day off for maintenance only and aren’t deemed to be injured.

Kalil is the starting center and has missed the last two games with a neck injury. His loss has been telling for the Panthers who have struggled offensively as the play of the line overall has suffered in his absence.

Defense is Solid and Goes Thru Kuechly: The Carolina Panthers defense hadn’t allowed a touchdown until last week’s game against the Saints. And the unit that has brought back Julius Peppers for a second stint in Carolina is solid across the board but the glue of the unit is LB Luke Kuechly. Patriots coach Bill Belichick raved about Kuechly during his conference call with the Panthers media on Wednesday.

“He does everything well,” Belichick said. “Very instinctive. Knows where a lot of plays are going either before they get there or very quickly after the ball’s snapped. He’s fast. He’s got good range. Gets sideline-to-sideline. Makes a lot of plays in pursuit. Tackles well. Instinctive in pass coverage. Has a lot of interceptions. He has more interceptions and tackles than anybody.”

“Gosh, he should be in the running for Defensive Player of the Year every year. The kind of production he’s had over the last few years is really second to none.”

Which Cam Newton Do We See Sunday?: Carolina quarterback Cam Newton as we said above is still struggling to return to form since his shoulder surgery during the offseason. The Patriots remember his game against them in 2013 when he was giving them fits in a 24-20 loss in Charlotte. Bill Belichick certainly does. The coach was lavishing praise on Cam as well. He was asked about the similarities between Newton and DeShaun Watson who the Patriots faced this week.

“Well, I think both guys probably have a few plays that are designed runs, and then there are other plays that are improvised runs,” Belichick said. “I think when you’re talking about mobile quarterbacks, guys that are tough to handle, tackle, can throw, run, make good decisions – I mean, I would put Newton at the top of the list.”

“Not saying that there aren’t a lot of other good players that do that, but I would say, of all the guys we play or have played recently in the last couple of years, I would definitely put him – he’s the hardest guy to deal with. He makes good decisions, he can run, he’s strong, he’s hard to tackle. He can do a lot of different things, beat you in a lot of different ways. We saw that in the game down there in ’13, so I would put him at the top of the list. Not saying the other guys aren’t a problem because they are, but he’s public enemy No. 1.”

With the team’s struggles with mobile QBs well known, they have their work cut out for themselves this week. The Patriots are essentially a man-cover team but with mobile QBs, the coaches play more zone in case they take off and run. How they choose to defend Newton this week is up in the air.

Christian McCaffrey May Get His Chance to Shine This Week: In the never-ending game within a game of chess matches, each week in the NFL is a humdinger this week. With the injuries along their offense, the Panthers have been relying more and more on rookie running back Christian McCaffrey. He’s got 25 carries, 18 catches out of the backfield and 9 returns on Special Teams. So what will one of the Panthers’ plans be this week? Isolate McCaffrey on one of the Patriots linebackers.

McCaffrey is very versatile, he can line as a feature back and share carries with Stewart, be used as a third down back out of the backfield or split wide, like the Patriots use James White and Dion Lewis. Belichick said today,”We have to be aware of where he is and what the possibilities are from those spots.”

McCaffrey hasn’t scored a touchdown this season and Carolina would like nothing more than for him to break out against New England whose struggles against running backs rivals that with mobile QBs. It will be interesting to see who they put on McCaffrey this week. Kyle Van Noy may be the logical choice …if Dont’a Hightower returns this week. Otherwise, he’s already got a lot on his plate. I doubt it would be Elandon Roberts. It may be a safety, Pat Chung or Jordan Richards.

By: Robert Alvarez
Patriots officially announce the hiring of Bill O'Brien as the offensive coordinator and quarterbacks coach for 2023.
15 hours ago

By: Robert Alvarez
Rob Gronkowski shares his thoughts on the Patriots bringing back Bill O'Brien to run the offense and voices his excitement and optimism.
16 hours ago