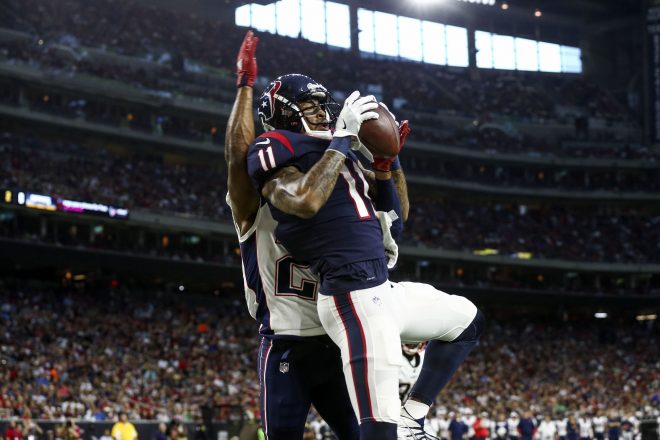 Patriots Favorites in Rematch With Texans

The Patriots return home after the first road trip of the season and a successful one down in New Orleans. Their next opponent may not have the explosive offensive potential of Drew Brees but the Houston Texans have one of the better defenses in the NFL and they’ve constructed it with beating the Patriots in mind. The teams met twice last season, a Thursday Night Football game in Week 2 when Tom Brady was still under suspension and in the Divisional Playoff game in Foxboro, both won by New England.

The Texans like the Patriots played very poorly in Week 1, getting beat at the line of scrimmage on both sides of the ball by the Jacksonville Jaguars who sacked Texans QBs 10 times. They rebounded nicely and put together a much better performance, especially on the defensive side which was dominant in their 13-9 win over the Cincinnati Bengals on Thursday Night Football. Rookie QB Deshaun Watson stepped in and played well.  He protected the ball and gave the Texans a chance to win the game. The Texans, also like the Patriots have been hit hard by the injury bug. They were without three tight ends in Cincinnati, lost both starting corners during the game and has to deal with LB Brian Cushing serving a 10-game suspension.

Here are our further Five Impressions of the Texans:

Watson Is In At QB…For Now: When the Texans drafted Deshaun Watson, they knew they were getting a big-time playmaker, as anyone who watched the college national championship game against Alabama can attest to. It is just that no one expected him to be starting this early in his career.

Head Coach Bill O’Brien ran an open QB competition this spring and summer and it was won by Tom Savage. But during the opener, O’Brien used the hook on Savage quickly, benching him after only a half when the entire team not just Savage played poorly. Those kinds of benchings can do irreparable damage to a young QBs confidence level.

Watson came on in the second half in the loss to Jacksonville and got the start against the Bengals. He played well and ran five times for a team-high 67 yards including a highlight reel 49-yard touchdown, the only score of the game and completed 15 of 24 passes for 125 yards with no interceptions and three sacks.

If Watson begins to struggle at some point and all rookie QBs do, how will O’Brien handle the very talented rookie? Don’t be surprised if O’Brien tries to cook up some trickery with the rookie since there is very little tape to study with him yet.

Miller and Foreman make for an Ideal 1-2 Punch: The Texans signed Lamar Miller away from the Dolphins a year ago and he has become their #1 back and was backed by big back Alfred Blue. But this season, the Texans drafted Texas running back D’Onta Foreman and he seems to be on the fast track to becoming the #2 back in the rotation as well as pushing for reps away from Miller.

Miller has gotten the lion’s share of the reps in the first two weeks, carrying the ball 35 times for 126 yards, good for only a 3.7 yard per carry average. Foreman, the 6’0, 233-lb back is only averaging 3.4 yards per carry. The problem isn’t with the two backs who are both very good, it has been the offensive line which has struggled to open lanes for them to run.

We were very high on Foreman coming out in the 2017 NFL Draft and thought he’d be a great fit here. Our draft profile on Foreman can be found here: During the preseason game in August, Foreman took a pass from Watson 63-yards against the Patriots defense.

Watt is Back and Leads the Texans Defense: With J.J. Watt back this season, the Houston defense has one of the best players in the NFL back to help an already very good defense. Watt leads a group of four excellent players on the front seven for Houston including Jadeveon Clowney, Whitney Mercilus, and Benardrick McKinney.

The excellent front seven is difficult to contain as they have so many impact players it is difficult to double-team any one player as opponents have to account for all of them. They can rush three and drop eight into coverage and still bring pressure on the quarterback. In the playoff game a year ago, they brought continuous pressure up the middle on Brady and flooded the middle of the field, taking away the short passing game across the middle. Julian Edelman had a big game against them in January. It will be interesting to see how the Patriots try to attack their defense this time around.

After a very lackluster opening game and allowing 155 yards on the ground, their defense was resembling the Texans defense we all recognize against the Bengals. They allowed just 82 yards rushing and kept the Bengals out of the end zone, allowing just three field goals in a very impressive showing. Expect the Texans defense to be sky high for this one on Sunday afternoon.

Fuller Returns to Practice: Texans WR Will Fuller broke his collarbone during training camp on August 2 and was expected to miss 2-3 months. But the fact that the Texans didn’t place him on IR to begin the season spoke to the belief that they’d have him back sooner rather than later. And with the release of WR Jaelen Strong this week, it seems that it will indeed be sooner. Fuller returned to practice on Tuesday.

Fuller is now in his second season with the Texans after being drafted in the first round of the 2016 NFL Draft out of Notre Dame. Fuller finished his rookie season of 2016 with 47 catches for 635 yards and two touchdowns.

If he’s able to return on Sunday to play against the Patriots, it would be a huge boost to the passing game. Because right now their biggest threat is De’Andre Hopkins and not much else.

Houston was without all three top tight ends, C.J. Fiedorowicz, Ryan Griffin and Stephen Anderson against Cincinnati. All three suffered concussions against Jacksonville in the opener. We won’t know until later on Wednesday when the injury report comes out if the three are going to be available on Sunday.

Texans Sign Cornerback Jonathan Banks in a Depth Move: In the Thursday game against Cincinnati, Houston lost both starting cornerbacks Kevin Johnson and Jonathan Joseph to injury. Joseph is expected to be back on the field this week in New England. However, Johnson is expected to miss about three weeks so the team added former Buccaneers corner, Jonathan Banks, to bolster their depth.

Kareem Jackson who came in for Johnson and played well is expected to get the start but the addition of Banks gives the Texans a much-needed boost of depth in their secondary.

The 27-year-old Banks was a second-round pick of the Bucs in 2013 out of Mississippi State. Banks was traded to the Detroit Lions in November of 2016 for a seventh-round pick. He was then released the next month and then signed with the Bears. He was just released by the Bears earlier this month.  He has recorded a total of 136 tackles, 17 pass deflections, seven interceptions and one touchdown during his NFL career

In a corresponding move, the team released TE Evan Baylis who was signed off the practice squad this week to fill in for the three tight ends who were out due to concussions. If Baylis clears waivers, he’s expected to be signed back to the practice squad.