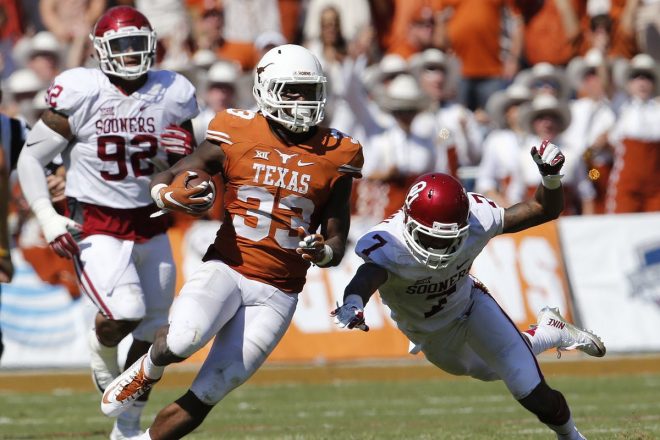 Foreman is a Big, Fast Athletic Back With Upside

D’Onta Foreman from Texas is just what the doctor ordered. He’s got tremendous size and is deceptively athletic for a big man. He measured 6’0, 233 pounds at the Combine and has a 10 1/8 size hands. He was a consensus All-American and won the Doak Walker Award as the nation’s best back.

He passed up his final year of eligibility and posted excellent numbers for the Longhorns with 323 carries for 2028 yards with a 6.3 yards average per attempt. And 15 touchdowns in 2016.  He also caught seven passes out of the backfield for 75 yards.

Foreman has the size and physicality to move the chains and in short yardage had a fantastic conversion rate. Can either hurdle would-be tacklers who go too low or run over safeties when he lowers his head. Has very good yards after contact.

He’ll be limited in third down production initially as he’s not good at all in pass protection and that is something Ivan Fears and the Pats coaches will insist upon him improving.

– Punishing runner when he wants to be

What his Role Will Be:
Williams role will be as the Patriots big, physical, move-the-pile back. He’d take over the Blount role, especially as a red zone, goal line running back that will pound the ball between the tackles.

Will his Role Change from Year 1-2?
Yes, with improved pass protection and ball security, he could see his snaps definitely increase in Year 2.

What Current Player on the Roster Will He Replace?
LaGarrette Blount, and/or Brandon Bolden.

Conclusion:
Foreman is a tough physical runner that has proven that he can shoulder a tremendous workload as a featured back. In the Patriots offense, he won’t be asked to do as much of that, but as a role player with the responsibilities in short-yardage, goal line and as a closer late in games, he’d be terrific.

He has very good lateral movement and can cut into open lanes without any loss of speed. He’s outstanding at running between the tackles and has the size to create his own hole when need be. He makes very good yards after contact (YAC).

For a big man, he has excellent foot quickness. At times, however, he showed a tendency to choose the finesse route rather than bull his way thru the line. He needs lots of work on his pass protection skills where at times he just throws a shoulder up rather than square up on a pass rusher.

Foreman had some issues with fumbling last season and that will also have to be worked on with the coaching staff. But as a punishing runner inside between the tackles, he would be a tremendous fit.

He can come in and contribute in a big way on Day1 as the “big back” with their offense. Foreman is slated to be available in Round 2-3. If he is available when the Patriots are on the clock, then he’d be a great choice to bolster the running game. With the weapons in the passing game, Foreman in the running offense would make this team a very difficult one to stop.

By: Robert Alvarez
Patriots officially announce the hiring of Bill O'Brien as the offensive coordinator and quarterbacks coach for 2023.
3 hours ago

By: Robert Alvarez
Rob Gronkowski shares his thoughts on the Patriots bringing back Bill O'Brien to run the offense and voices his excitement and optimism.
4 hours ago

By: Mark Morse
This is the second article analyzing the team's performance and the future of the personnel.  The Offensive Line will come into focus in this piece.
13 hours ago

By: Ian Logue
Quarterback Bailey Zappe got a little love from his hometown recently, with the former Victoria, Texas East High School signal-caller reportedly set to see his…
1 day ago