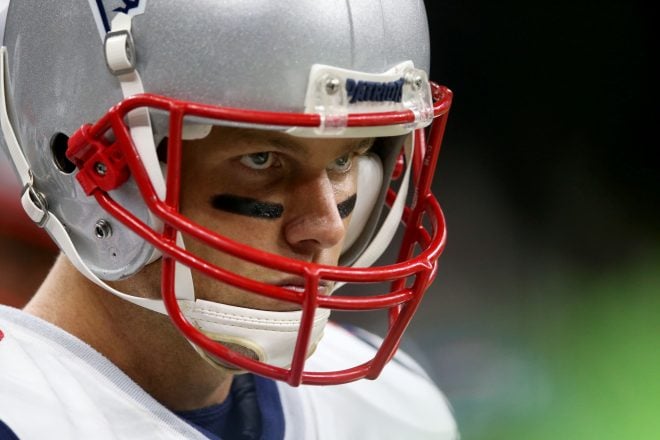 NEW ORLEANS – Tom Brady had to wait ten days for this, and it showed on the field all during the game.

In one of the most heralded quarterback matchups in NFL history, Brady and the Patriots evened their season record at 1-1 with a 36-20 victory over the Saints on Sunday at the Mercedes-Benz Superdome. Brady and his counterpart, Drew Brees, who will one day own a bust in Canton alongside his opponent, set a few NFL firsts by just competing against each other. This was the first time in NFL history that two quarterbacks with ten Pro Bowls each faced each other in a game. This was also the highest combined career passing yardage total from the two quarterbacks in NFL history.

Brady finished with 447 yards passing, the third highest total for one game in Brady’s career. His passer rating was 139.6. The three first quarter touchdown passes were it for the game, but it established the Patriot offense early and forced the Saints back on their heels all game long. Brees finished with 336 yards passing against a Patriot defense still trying to figure things out but not nearly as awful as the Saints defense.

About all the Saints could brag about on defense was that they held one of their former players, Brandin Cooks, to only two catches for 37 yards. Sean Payton obviously knows Cooks better than the Patriots, and Marshon Lattimore did a nice job on Cooks all game long to prevent what should have been a happy homecoming for him. But Payton and his defense had no answer for Rob Gronkowski, who had six catches for 116 yards and a touchdown before leaving the game with a groin pull in the third quarter. And they also had no answer for James White, who had eight catches for 85 yards. Add another 146 yards from Philip Dorsett and Chris Hogan, and the Saints had more than they could handle on defense.

There was really nothing fancy about this game. If anything, Brady and his offense can still be classified as a work in progress. Brady was able to put up his numbers without really getting into a rhythm. He did complete 30 of 39 passing, but the offense still looks like it misses Julian Edelman, some receivers had drops, and many of Brady’s passes were lobs, tosses and fades. In other words, the numbers are there, but the style points aren’t. If style points translate into more scoreboard points, then Brady, Bill Belichick and Josh McDaniels will care. Otherwise, just shut up and take the win.

One thing Patriot fans are still waiting to see is the emergence of Cooks. Without Edelman out there to get his hands dirty, Cooks needs to emerge as a top offensive weapon and not a decoy to help out other receivers. If Gronkowski’s groin pull turns out to be worse than what was reported during the game (Gronk was seen riding a bike in the fourth quarter, so that can be taken as a good sign), along with Danny Amendola missing Sunday’s game and Chris Hogan injuring his knee slightly, it is incumbent upon Cooks and Brady to get their acts together and figure out all they are capable of. They have an opponent in Houston next week with a weak offense where a large point total won’t perhaps be necessary, but Cooks needs to step up and show the Patriots why he was worth a first round pick.

Defensively, two unheralded players stepped up, and they may not be unheralded much longer. Rookie Deatrich Wise had one sack and five quarterback hits, and applied pressure to Brees all game long. Jonathan Jones had two above average defended passes, one of them in the end zone against Ted Ginn Jr. in the second quarter. With Malcolm Butler still not playing like his old self, Jones’ work has been very much appreciated.

The defense as a team held Brees and his terrific passing attack to only two touchdowns, which was also a key to victory. One telling moment came towards the end of the first half, as Payton, trailing 27-13 at the time, went for it on fourth and three on the Patriot 25 rather than attempt a 43-yard field goal. Brees tried to hit Ginn in the end zone on a right side fade route, but Eric Rowe stayed right with Ginn and the pass went awry. Payton was forced to go for touchdowns knowing that field goals against Brady and the Patriots would do him no good.

Brees finished 27 of 45 passing, two touchdowns and a 99.9 passer rating. Michael Thomas had five catches for 89 yards, while Brandon Coleman had four catches for 82 yards. In the backfield, Payton is still featuring Mark Ingram and not Adrian Peterson; Ingram had 52 yards while Peterson had 26, with each back carrying the ball eight times. There was no sighting of Peterson staring his coach down this week.

The Patriots will host the Texans next Sunday at home. Houston will start Deshawn Watson at quarterback, the hero for Clemson last year in their FCS championship win over Alabama. Houston is still trying to figure things out offensively; their 13-9 win Thursday night at Cincinnati was the football equivalent of 1-0 soccer match. But the Texans have the coaches who know the Patriots well, and those powerful defensive stars who will give the Patriots a battle.

Whatever the case, 1-1 beats 0-2. The Patriots did what they do, or were literally supposed to do on Sunday. They remain a work in progress, but Patriot Nation has to feel a little bit better tonight.