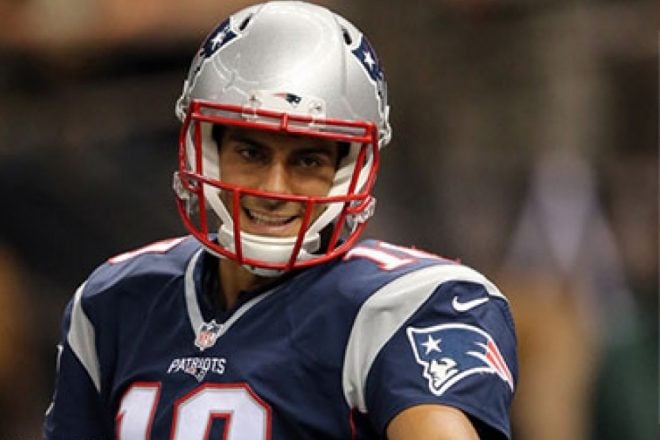 The Patriots conducted practice on Tuesday afternoon but opened up the locker room prior to practice for player interviews. The predominant theme among the players every time they’re asked, (and they are), about the Tom Brady court case is this:

They support their quarterback to a man and they won’t allow this fiasco to distract the team from preparing for the season.

“Just focus on your job, WR Danny Amendola said. “When you come to work, “you’re expected to be professional. Everybody here has a job to do.” He added that he doesn’t watch any television or read the papers.

Quarterback Jimmy Garoppolo had a horde of media around his locker asking if he’s preparing to be the starting quarterback against the Pittsburgh Steelers. He’s now quite adept at sidestepping the inevitable question about Brady but did have this to say.

“We’re going about our business as usual, just getting ready and certainly not overlooking the next game against the Giants, just taking it day by day,” Garoppolo said. He stated that playing with so many different players is challenging as a quarterback as he must get used to different players’ styles and abilities.

But, each player is different he said, there is no such thing as a perfect football game, so the players must be mentally tough to face whatever challenges that may occur.

With persistent questions about being the Week 1 starter, Garoppolo, a relative newcomer to the media scrutiny, didn’t take the cheese.

“You’ve got to come into this.. whether you’re a starter, backup, you’ve got to have the starter mentality. You never know when your number is going to get called. Whatever it may be, I’m preparing like the starter and I’ve got to be ready for Week 1.”

You can watch a short YouTube clip of his interview here:

Asked the inevitable Tom Brady court case questions and if he believes the players are distracted by it, his answer was classic Belichick. “Right now, we’re just focused on going out to practice and working on things we’re doing today.”

Belichick spoke at length about the process that goes into forming the practice squad.

“How do you find the right guys, what’s the right mix and all that, some of it is the individual player, some of it is the circumstances that are surrounding him,” Belichick said. “Some of it is maybe your overall read of what the league perception is of that player or your position or whatever it happens to be, and you just try to do what you think is best.” Belichick stated that the consideration for some players for the PS may start as early as the draft.

The number of players not dressing for practice was only eight. James Develin and Darryl Roberts who were both later placed on IR, Brandon LaFell, Chris Jones, Dane Fletcher, Bryan Stork, Marcus Cannon and Chris Barker.

Fletcher was seen running during the stretching portion of practice but in shorts and a t’shirt. LaFell was again seen in the locker room prior to practice.