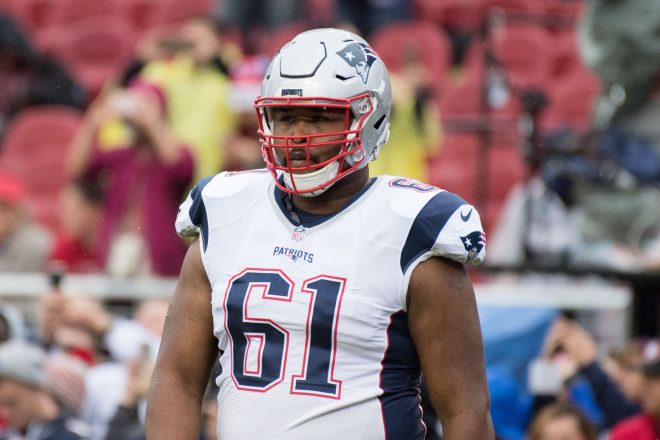 The Patriots return four of their five starters from an offensive line that was just outstanding in 2018 enroute to the team’s sixth Super Bowl title. The one very big piece both figuratively and literally is left tackle Trent Brown. Brown came to the Patriots last year with questions if he could be a viable left tackle in the NFL. He not only answered those but parlayed them into a massive 4-year contract worth $66 million dollars with the Raiders this spring.

The Patriots drafted Isaiah Wynn in the first round of the draft last year with the expectation that he would be the left tackle of the future. However, Wynn tore his Achilles in the preseason last summer and spent the entire year on IR.

The strength of the offensive line is with their guard tandem of Joe Thuney and Shaq Mason which is one of the best in the NFL. Scrappy, tough and steady David Andrews is the center and Marcus Cannon is the right tackle.

The Patriots are hoping that Wynn is ready for a full load this season and is ready to be a left tackle in the NFL. Backing him up is the underrated rookie T Yodny Cajuste from West Virginia. Cajuste is coming off quad surgery this offseason and missed all of the spring. But he is the swing tackle of the immediate future.

The team signed veteran Jared Veldheer this spring but he decided to retire when he said his body wasn’t going to withstand the rigors of another season.

With a 4th round draft pick, the Patriots selected Hjalte Froholdt, he should immediately challenge Ted Karras for the top interior backup role. The biggest question after Wynn’s status will be who will be the 4th tackle on the depth chart? Cole Croston, Cedrick Lang, Dan Skipper, Tyree St. Louis, and Calvin Anderson will be all vying for that position.

As long as Dante Scarnecchia is patrolling the Patriots sideline as the team’s offensive line coach, the Patriots can pretty much weather any storm that creeps up with the offensive line. So, with training camp just around the corner, let’s take a look at the position.

Discussion – We expect that Wynn will be ready to go for training camp. I watched him take part in individual drills during minicamp, he was held out of team drills, I believe as a precaution. He looked to me that he was moving without any issues and looked ready to go. Regardless, Wynn, Thuney, Andrews, Mason, Cannon, and Cajuste are all locks for the roster.

Froholdt and Karras are both near locks. I personally believe that the team is looking at Froholdt as starter material for next season. Joe Thuney is in a contract year and could be in the market for a big payday. He played nearly all of the starter snaps during minicamp with Wynn and Cajuste absent. If he does leave, Froholdt may be getting groomed for the next guard under Scarnecchia.

Karras has been a very good depth player and has the ability to fill in at guard and center. He’s tough, physical and versatile. Only an awful summer should stop him from earning a roster spot in 2019.

Cole Croston would be the next in line for the 4th tackle position. He’s been kept around the past few years but is in no way considered a lock for the roster. He’s a very good practice squad candidate. The Patriots could still be in the market for another tackle.

Overall, the offensive line is in very good shape overall. Even though Wynn hasn’t played a snap in the NFL, the Patriots spent the 23rd overall pick on him for a reason. And although I may be overplaying things a bit, as long as Scarnecchia is coaching up the O-line, I have no doubt that they’ll figure things out.

With training camp starting next week, the competition among the linemen should be extremely fun to watch.