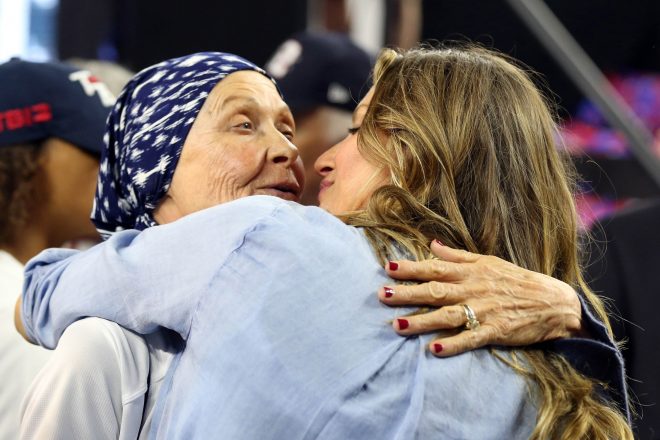 Tom Brady may now have five Super Bowl rings, but he is no longer the only member of his family to possess one.

In a recent article by ESPN Boston’s Mike Reiss, it was confirmed that team owner and CEO Robert Kraft surprised Tom’s mother, Galynn Brady, with her very own Super Bowl LI championship ring this offseason.

For most of 2016, Galynn was battling an undisclosed form of cancer that caused her to miss all but one game of the season, that one game was Super Bowl LI. Using his mother as an inspiration, Tom Brady willed the Patriots to one of the most improbable wins in NFL history as Galynn was by her son’s side when the celebratory confetti fell.

“He’s been so supportive of my family and certainly everything my mom went through and knowing first-hand how families deal with it,” Brady told Reiss this past Friday when asked about the move. “He was always asking, ‘How’s mom doing? How is she feeling?’ We didn’t know up until the very end whether she was going to make it to the Super Bowl. She was a big inspiration for me, and [Kraft] knew it. It was a great surprise to all of us when the ring showed up. She deserves it.”

According to a June article by the Boston Globes Christopher Gasper, Galynn finished her cancer treatments back in April.

On Monday, Brady shared an old high school photograph of the two of them together with a heartfelt message.

Every practice, every game, every meal, every call, every hug – for all the love that you give and every moment you make possible – thank you mom. You are my champ, my definition of #UnlikeAny and the epitome of everything @underarmourwomen stands for. I love you ❤️

By: Steve Balestrieri
“Why don’t you guys go to the officials with your pool reporter and ask them about the play and let them explain it to you,…
23 hours ago