It was quite a wait for anyone watching Friday night’s coverage of Rounds Two and Three of the 2017 NFL Draft, with fans in New England forced to wait a little longer after Bill Belichick did Belicick-like things on draft night.

The Patriots didn’t have a second round pick and just as it seemed the they were poised to make their first selection of the night, Belichick traded out of the 72nd overall spot with Tennessee, shipping off a 6th-round pick along with their selection while picking up a 4th-round pick.  They essentially moved back 11 spots with the trade with the Titans, who selected Western Kentucky receiver Tawaun Taylor with New England’s #72 pick.

When the Patriots did finally get back on the clock at 10:25pm ET Friday night, former Patriot Andre Tippett came out and announced the selection, with New England going with Youngstown State defensive end Derek Rivers with their first pick of 2017.  Prior to the selection, Mike Reiss predicted a “line of scrimmage” pick, and Rivers certainly looks like one who will make some noise up front.

Overall, Rivers is a solid addition and another young player who should hopefully develop well along with fellow Patriot, Trey Flowers.  He was also just named 2017 Youngstown Scholar-Athletes of the Year Thursday Night along with track and field standout Jaynee Corbett.

The Patriots then traded up with the Lions from the #96 overall spot to #85 and grabbed offensive tackle Antonio Garcia out of Troy. 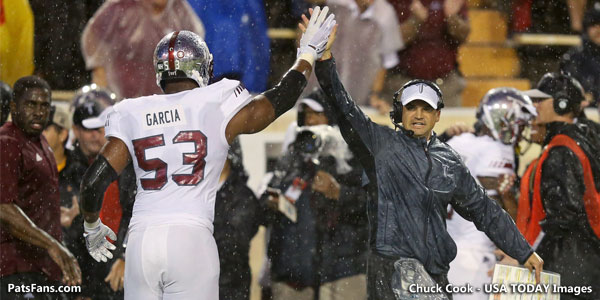 
In Garcia, New England added a key player to their offensive line, filling a need at the tackle position after the team released Sebastian Vollmer last month following an incredible tenure by Vollmer with the club. The 6’6″, 302 pound tackle finished his career having played in 44 games over his collegiate career, including 13 in his final season in 2016.

His former school Tweeted out the fact that the rookie is the highest pick ever drafted out of his university.

Antonio Garcia makes history as he goes to the @Patriots with the 85th pick of the #NFLDraft; highest Troy & @SunBelt OL ever drafted #RTW pic.twitter.com/8G780QCwEm

His school also pointed out that after 900 snaps, he never gave up a sack.

Thanks @Tony_Garcia53 for helping #RTW and best of luck with the @Patriots pic.twitter.com/xgpOknrVDk

It appears to be a great move by the Patriots who obviously wanted him, giving up their 96th and 124th overall selection in the move.

Garcia said back in March that he was looking forward to the draft, and he was excited for the next step.

“You hear some of everything from everybody,” Garcia said of the whispers of potential teams via USA TODAY. “Anything can happen on draft day, so I’m just taking it one day at a time and just making sure I’m in shape.”

And now he’s a Patriot.