We’re at the halfway point for this week, and here’s a look at today’s top stories.

Bayless: Patriots “Outrageously Better” than Rest of NFL – With the news of Malcolm Butler not being traded, FS1’s Skip Bayless believes that New England’s talent, which included the addition of former Bills cornerback Stephon Gilmore along with running back Mike Gillislee, has them as what he believes to be the “prohibitive favorite” right now.

"In all my years of covering the NFL… I can never remember on April 25th, a more prohibitive favorite than New England." — @RealSkipBayless pic.twitter.com/QQFssaodcE

“All I know is that in all my years of covering the National Football League, which is a lot of years, I can never remember on April 25th a more prohibitive favorite that New England is today,” said Bayless.  “Now you two [referring to Shannon Sharpe and Joy Taylor] know all too well how much can go wrong in August, September and October, but right here, right now, they are outrageously better than anybody else in the National Football League.”

“Let’s get this straight,” continued Bayless. “They’re able to keep Malcolm Butler to pair with their free-agent signing Stephon Gilmore, the best corner on the market, and now Buffalo has allowed them to keep Mike Gillislee.”

Bayless believes the Gillislee pick up is one of the strongest additions for the team, rounding out New England’s offense and putting them with such a competitive advantage, he can’t even think of a team on their level.

“I don’t even know who the second best team is in the NFL is today.  Is it the New York Football Giants with no running back to speak of?”, continued Bayless.  “It’s like head and shoulders above the field right now.” 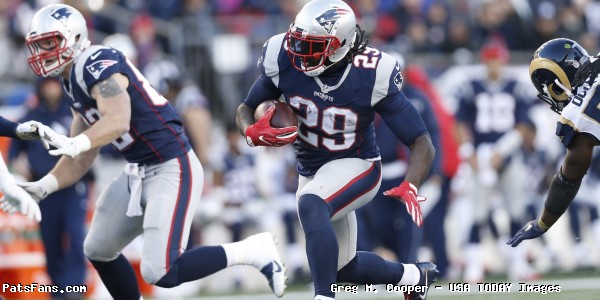 Blount is drawing interest from the Giants


Blount Drawing Interest From the Giants – Following Mike Gillislee’s addition on Monday, the Patriots backfield became too crowded for LeGarrette Blount, who appears unlikely to return in 2017.

Blount, who reportedly had an offer on the table by New England that he turned down earlier in the offseason, now finds himself as the odd man out with the team he won two championships with.  As a result, he’s left to pick himself up and move on for the second time after leaving via free agency following the 2013 season, but it looks like he might at least have a landing spot.

According to the NFL Network’s Ian Rapoport, there is reportedly a “mutual interest” between the Giants and Blount, which could potentially reunite him with former Patriots running back Shane Vereen.

One player who already appears excited at the prospect of Blount joining the team is former running back Brandon Jacobs, who believes the free agent would be a “great” addition to the club.

With the draft full of running back prospects, Blount may hope that a deal gets done sooner rather than later, otherwise his options may continue to dwindle for him to find another opportunity between now and the beginning of training camp.

While the story’s title states the obvious that the team’s draft strategy centers on making the most of every selection, McGinest offers some insight he received after talking to Belichick last weekend about this topic.

It’s simple: The Patriots aim to draft as efficiently as possible. Throughout the draft process, they break down players and several scenarios that could play out. There could be a special talent they’re willing to trade up for (SEE: Chandler Jones and Hightower in 2012). Or the Pats hold their position if they think the player they like will still be on the board when they’re on the clock (SEE: Brown, who went 32nd overall in 2015). Or the Pats consider trading down to get a better value for a player who isn’t necessarily high on their board.

One interesting point McGinest revealed was how Matthew Slater ended up being taken in the 2008 draft.  Belichick told him they weren’t sure exactly what position he’d play, but he felt there was enough talent to warrant making the move to take him.

In our conversation over the weekend, Belichick mentioned making a move for Matthew Slater in the fifth round of the 2008 NFL Draft. The Patriots weren’t sure whether Slater would be a defensive back or wideout, but they did recognize that he was talented and could immediately contribute and improve the team. In this instance, they saw value and risked the trade — and it has paid off. Slater has been one of the NFL’s best special teams players over the last decade, making six Pro Bowls and earning first-team All-Pro honors last season. Slater simply makes plays that positively affect field position. Hidden yardage isn’t talked about enough in today’s fantasy-crazed football environment, but it’s a major factor.

McGinest then goes on to list off the players he believes would be good fits with the Patriots, picking two players from each side of the football.  You can CLICK HERE to see who he selected. 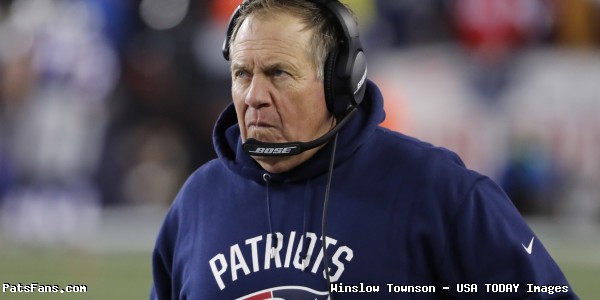 Belichick and the front office haven’t let up this offseason.


Lombardi on Belichick’s Draft Methods: “No one was permitted to mention rounds” – Mike Lombardi knows Belichick well from their time together in Cleveland and he shed some light into Patriots head coach’s mentality as it pertains to the draft.

Lombardi had a piece on “The Ringer” where he talked about how the two came up with a grading system that Belichick still uses today, which is one of the things behind New England’s success.

“Thankfully, Bill Belichick and I were always on the same page,” wrote Lombardi.  “When Bill joined the Browns in 1991, the two of us spent the better part of his first season designing our grading system. We wanted to define the prospect’s role on our team, and we wanted to predict how long it would take for him to achieve that role. That’s it. Instead of predicting rounds, our system forced our scouts to grade every player as (1) a starter, (2) a potential starter, (3) a developmental player, (4) a backup, or (5) someone who couldn’t make any NFL team. In Belichick’s room, no one was permitted to mention rounds — that job was for useless coffee-guzzling scouts and cliché-spouting TV commentators.”

“Our grading system became a language of its own; it proved to be effective enough that, even all these years later in Foxborough, little has changed. Ever wonder why the Patriots always move backward in the draft? Most times, their draft board features maybe 14 or 15 potential day-one starters — grades dictate everything. Why waste a first-round pick (and first-round money) on one of those 14–15 prospects if you believe you can land one later and land another asset?”

That makes sense given some of the talent they’ve been able to add over the years, although this offseason has seen them trade quite a few picks in return for known commodities, whether it was through a direct trade or as we saw on Monday, losing their 5th round pick after signing Gilislee to an offer sheet the Bills declined to match.

Either way the Patriots have had one of the most memorable offseasons in recent memory, leaving most everyone feeling pretty excited about what the future might hold this season.

” will tell you that the Patriots are no strangers to including plenty of terrific behind-the-scenes footage, and the team released a glimpse of it yesterday that took fans into the meeting room leading up to their match-up against Houston.

In the video, you’ll see Josh McDaniels working with his offensive assistants such as receivers coach Chad O’Shea as they put together their plan and you can basically see a glimpse of how the 13-yard touchdown to Dion Lewis came to light.

Just like Josh McDaniels and the offensive staff drew it up.

Great stuff as usual, and it should be something every fan will want to add to their collection. It’s available for pre-order for release on May 2, and will definitely be a fun way to relive what was certainly an incredible season.

By: Ian Logue
Patriots quarterback Mac Jones was back at practice again on Wednesday, which doesn't make much sense given the severity of the high ankle sprain he…
17 hours ago