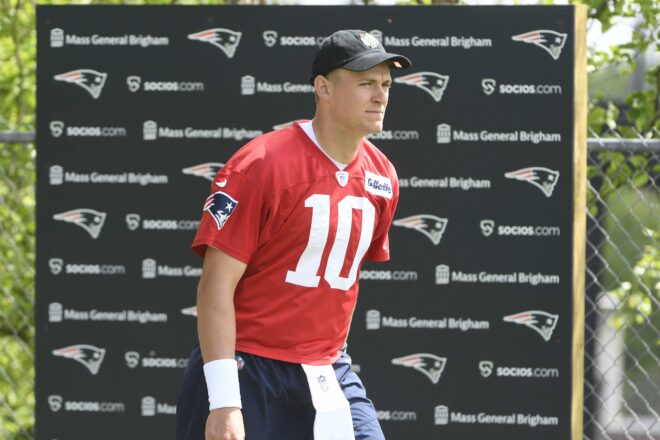 1) One of the things that stood out this week was just the vibe and the mood on the field as Mac Jones went out and took the field during OTAs.

His work with his teammates as a second-year player has just been impressive, as Jones appears to be completely in command of things out there on the field and really just seems to bring out the best in the guys around him.

Part of that is likely due to the fact that he’s built relationships both on and off the field with each of them.  While he was seen in various workout videos with what generally appeared to be the majority of players this offseason, Jones admitted on Monday that many of those relationships extend beyond the field, which obviously helps build even bigger bonds between them.

“In terms of team chemistry, I think we’ve made leaps and bounds there,” said Jones.  “As a rookie you come in, you’re kind of thrown in and everything —all the plates are hot, you know? So you kind of just try and find your feet. But now this past offseason and right now we’ve just built a great relationship with the offensive line, the receivers, hanging out together, just doing things together off the field because at the end of the day, we’re all friends, we work together, we want to play for one another, and that’s important to me.”

“That’s why football is the best team sport, you can take a guy like Kendrick [Bourne] who brings energy every day, and then we have him over for a Hibachi party or something, so it’s just fun. Like, we always hang out and have fun and talk the talk and all that and it just builds for Sundays.”

Obviously, Jones’ second season presents a bit of a new challenge thanks to the departure of offensive coordinator, Josh McDaniels.  So far, he believes this group of players and coaches is a really good one, which he believes should help make things a little easier as they begin the transition of moving on to the next phase of things.

“We have a very good group of guys,” said Jones.  “I think it’s obviously always about the players and having great coaches is obviously very beneficial too. But we have a great group of guys — old guys, young guys, and we’re excited to come together and work.”

For now, the guys around him appear to both love and respect him, which should have everyone excited to see if that translates to success and a potential step forward this season.

2) One other interesting note comes from Greg Bedard of Boston Sports Journal, who noticed the usage of Josh Uche during the team’s open session earlier this week.

Bedard pointed out that the club had Uche working at both second-team inside linebacker and on the edge, which was curious given what we’ve seen from him previously.

He did note that Matthew Judon, Ronnie Perkins, and Anfernee Jennings were each missing, which he feels might have been part of the reason for the additional reps.

But he emphasized the fact that seeing this type of work at this stage was definitely unusual.  If this is any indication of what we might see from Uche this season, it should be something that will be most certainly interesting to keep an eye on.

3) Bill Belichick had been a little more flexible when it came to allowing assistant coaches to talk to opposing teams about potential job openings in recent years, but it sounds like that might not have been the case with one of them.

Breer, who is in Atlanta for the NFL’s spring meeting, reported the news earlier this week and pointed out that how Caley’s role evolves this season could potentially decide his future beyond this year.

“Tight ends coach Nick Caley’s role seems to be a little in flux,” writes Breer. “I’d expect he’ll have more responsibility in ’22. The Patriots blocked Caley from talking to the Raiders, and his role in New England this fall could dictate whether he stays put or goes to Las Vegas in ’23.”

Former Director of Player Personnel, Nick Caserio, was among probably the more notable people within the organization prevented from interviewing in recent years, with his situation ultimately becoming contentious.

After being allowed to interview with the 49ers in 2017, he was denied permission to interview with Houston in 2018, where former Patriots coach Bill O’Brien, who was the Texans head coach at the time, along with former colleague Jack Easterby, likely lobbied for him.

They attempted to speak to him again in 2019 but were again denied, which also saw tampering charges filed by the Patriots.

However, although Caserio never talked about it publicly, he likely wasn’t pleased about it because he immediately took over the role with the Texans after his contract ended in New England following the 2020 NFL Draft.

Belichick also denied Josh McDaniels an opportunity to move up his interviews at the end of the 2019 season, which some at the time believe potentially cost him a head coaching job.  Despite being eliminated from the playoffs, there were teams who requested to move up their interviews with McDaniels but Belichick reportedly didn’t permit it.

Two teams he may have missed out on were the Giants and Panthers, with Joe Judge and Matt Rhule ultimately getting the jobs.

McDaniels had interviewed in Cleveland over that period but was not hired.

As for Caley, it’s going to be interesting to see how things ultimately unfold for him.  He doesn’t appear to be in the mix for an opportunity to move into an offensive coordinator role at this time, which could put his chances of staying in question.

Part of that could fall on the success or failure of Joe Judge or Matt Patricia’s handling of the playcalling duties in 2022, which is obviously something everyone will be keeping an eye on in the coming months.

4) Out in Cleveland, newcomer Chase Winovich appears that he could be poised for a potentially big role there this season.

The former third-round pick by New England out of Michigan is a player they seem to feel could be a rotational pass rusher in their defense and someone who could ultimately even take over Jadeveon Clowney’s role.

Clowney just re-signed on a 1-year deal worth $11 million with the Browns but he dealt with injuries that kept him out of the line-up periodically in 2021.  Meanwhile, Winovich is in the final year of his rookie deal, with a base salary of $965,000 for this season.

Winovich, who was traded this offseason by the Patriots to the Browns for linebacker Mack Wilson, has been putting in a lot of effort this offseason, having reportedly gained 10 to 15 pounds while telling reporters he’s the “strongest I’ve probably ever been.”

He’s also excited for his fresh start with his new team.

“I’m just very thankful that the Cleveland Browns believe in me, and I certainly have been putting in the work and effort to make sure that I’m prepared come season,” Winovich said. “I’m just really fired up to be here.”

Here’s a look at Winovich, who definitely looks a little different.

5) We’ve heard about the fact Mac Jones throws a very “catchable” ball and down in Miami, that also appears to be the case with his ex-teammate.

Tua Tagovailoa has received similar praise from newcomer Tyreek Hill, who apparently initially had some concerns about his new quarterback.

Hill’s biggest question about Tagovailoa, who is also a left-handed quarterback, was whether or not the ball would be more difficult to deal with compared to catching passes from Kansas City QB, Patrick Mahomes, but so far, that hasn’t been the case.

In fact, Hill praised his new quarterback this week and said what he thought has been the complete opposite of what he’s seen so far.

“At first, I thought it was going to be something crazy — the ball going all over the place — but Tua actually has probably one of the prettiest balls I’ve ever caught in my life. It’s very catchable,” said Hill.

Tagovailoa reportedly missed Tuesday’s session with an illness but the overall feeling down there appears positive so far, with Hill adding that any concerns people have about the Dolphins’ starting quarterback are certainly nothing they should be worried about.

“I just feel like football is all about confidence, and I’m very confident in my quarterback,” said Hill. “I just feel like if I’m able to help him get all the confidence in the world and push other guys to push that confidence into him, then the sky’s the limit for the guy because he’s a heck of a talent, has crazy arm strength, arm talent. … We’re all excited just to watch him sling the ball each and every day.”

The team also has quarterback Teddy Bridgewater behind Tagovailoa, along with seventh-round pick Skylar Thompson.

By: Steve Balestrieri
“Jimmy was practicing and then decided not to play. Jacoby played with no ligaments in his thumb, which you can’t do that as a quarterback."
22 hours ago