We’ve survived another week, so good luck to all of you as we head off to work on this Friday and here’s a look at this morning’s top stories.

Patriots Could Have Personnel Problems Heading into 2017 – There are quite a few contracts coming due after this season, with 14 significant names set to hit some form of free agency heading into 2017.  While the Patriots are in reasonably good shape to try and get some deals done to keep some key guys from heading elsewhere, this could be a pivotal year.

They have arguably one of their more talented defensive groups than they’ve had in a long time, and that side of the football is one that appears to be on the verge of some major changes if deals can’t be extended this season.  The two most notable names are Jamie Collins and Dont’a Hightower, who should be the two top priorities to get done at this point.  From there there’s also Rob Ninkovich or Jabaal Sheard who are deserving of new deals, along with Logan Ryan or potentially Malcolm Butler if the Patriots choose to be proactive with what’s seemingly becoming a delicate situation.  Reports have said Butler isn’t happy about the $600,000 he’s set to make this season, but the Patriots at least have the leverage since Butler will be just a restricted free agent after this season and the compensation required to steal him (a 1st round pick) would be too steep for another team to attempt to take him away.

However, moving Chandler Jones via a trade to Arizona seemingly tipped their hand and revealed that they valued keeping other key players since Jones likely would have been too high to retain after this season.  Despite having just $9.7 million in cap space heading into this season, as Greg Bedard of SI.com pointed out, the Patriots appear like they’ve been preparing for this scenario as they have $63.2 million in cap space in 2017, giving them plenty of breathing room financially.  The only problem is, as Bedard also mentions, the Patriots won’t be able to use any of that money on expired contracts until the first day of the new ’17 league year, which would allow those players to potentially talk to other teams.

So the problem there is, should the Patriots have a 2016 season that ends up with a win in February, as we’ve seen in the past, success obviously would probably work against them.  Other teams always want a piece of a championship puzzle and if the Patriots can’t get Hightower or Collins extended, letting either player hit the market would potentially be a disaster since there are likely several teams who would love to have a young, talented player like either of those two on their roster.

Hightower’s cap number for this season (approximately $7.8 million) likely makes him number one on the list since an extension likely lowers his cap hit for this season, giving the Patriots more room to work in order to get other deals done.  He’ll probably be the one to watch in terms of the first domino to fall, and it wouldn’t be a surprise to see him extended before the Patriots play a meaningful snap this season.  The same holds true for Collins, who will likely receive a pretty good bump in pay before 2016 begins.  Those two are the building blocks around this defense as those two along with McCourty at safety are three key pieces they can continue building around.  If they can go one step further and lock up Sheard along with Butler, they’d definitely be in tremendous shape for the foreseeable future.

From there the remaining question will be how the team will handle a couple of other key names on defense.  Ninkovich, at 33-years old, is still a valuable member of the team and one would believe the two sides should be able to figure out a way to keep him around.  Ryan’s heading into a big year where he could earn himself quite a raise, which could put the Patriots in a tough spot if his price tag pushes him out of range.  With New England drafting Cyrus Jones, there’s some added pressure for the rookie to play up to his expectations.  Ryan has had some rough moments, but overall he’s been serviceable in this defense and they’ll definitely need someone to step up in a big way if he’s gone after this season.

Considering the other remaining names who could hit the market after this season, (Sebastian Vollmer, Alan Branch, Duron Harmon, Terrance Knighton, Matthew Slater, Brandon Bolden, Chris Long, Jonathan Cooper, Marcus Cannon, Martellus Bennett) it certainly will set up an interesting offseason after this year.  A strong season from each of them obviously bodes well for them to cash in, and that’s a situation that if it ends with a championship, may make it a problem the Patriots will be fortunate to have. 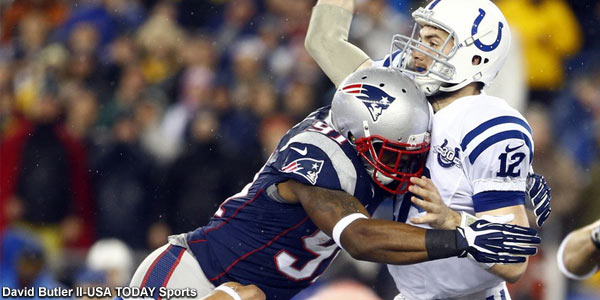 Jamie Collins is obviously one of several players the Patriots need to extend before 2017.

Slater Not Pleased About New Kickoff Rules – When you’re a player like Matthew Slater who has made a living on special teams, the idea of changing the rules in the kicking game is something that obviously isn’t sitting too well.

The NFL made a rule change this offseason that will give teams the ball at the 25-yard line on a touchback, which will likely have an impact on kick returns this season.  Given the fact the league is trying to do things to reduce concussions and improve player safety, the next question is going to be whether or not it will be part of the future in football.

Slater isn’t pleased with the changes, and he spoke about it to reporters on Thursday.

With the focus the Patriots tend to put on special teams, the rule change is clearly going to have an effect on how they approach things this season.  According to Slater, the practices so far haven’t been adjusted yet, and he’s not sure exactly how they’re going to handle it.

“I don’t know how we’re going to approach it yet,” Slater said. “Right now, we’re just practicing our techniques the same way we would if it was last year. We’ll see. I certainly think there is a possibility that a lot of coaches are not going to want to hand teams the ball on the 25-yard line.”

Slater admitted that the change in field position it gives opposing offenses is something he doesn’t believe is great for the game, although he respects the fact the league is trying to make things safer for the players.  It’s just one of those things that, for now, he’s going to have to wait and see how things play out.

“I don’t feel like that’s the best thing for the game,” Slater said of the starting field position it gives the offense.  “But I understand they’re trying to do what’s best in terms of health and safety, and I respect that.”

“There’s nothing more important than the health and safety of our players, but I do not think the kickoff is a hazard that we need to be thinking of getting rid of.”

Kraft Excited For this Season – After spending the offseason seeing his team put together a pretty talented roster, Patriots owner Robert Kraft is looking forward to seeing how it shapes up on the field.

Kraft spoke during Thursday’s Myra Kraft Community MVP event and deflected questions about his recent decision to jump in and get involved with Brady’s ongoing legal battle against the NFL from deflategate.  When asked how confident he was things would “work out” with Brady’s fight against the league, Kraft said his hope is for a successful season, and he can’t wait for it to begin.

“Things working out, to me, means we make the playoffs and then hopefully take the next step to do what we all would like to see happen here,” said Kraft.  “When you go through the locker room you get a feel of what’s going on and I think the new people that have come in are pretty special. There is a great chemistry in the locker room and people have worked very hard in the offseason training program.”

“We’re very excited to have football back. I can’t wait for the season to start.”

It’s probably safe to say the rest of us agree with him at this point.

Brady Makes a Great Connection with a 93-year old woman – We’ll end on this note.  There are some moments that make you smile, and Brady happened to provide just that during the charity event on Thursday.

Brady, who was among players present for Kraft’s event, was spotted sharing a nice moment with 93-year old Ida May Molitor, who was one of the recipients of the 2016 Myra Kraft Community MVP award.

WEEI’s Mike Petraglia caught the moment on video, as Brady smiled and laughed with Molitor, who told him to “keep up the good work”.

A precious Tom Brady moment with 97-year old Ida May Molitor, who told Brady to "keep it up" pic.twitter.com/n9lGma405e

He’s a class act, although anyone who is from this region already knows the type of person he is.  That’s yet another reason all this nonsense is so frustrating, and hopefully in light of all the legal support he’s gotten over the last week, he’ll be able to pull off a win in court to make sure he’ll be out there when the season begins a few months from now.

SOCIAL POST OF THE DAY:
Brady celebrates Thursday being the 21st anniversary of the Expos drafting him, although he’s obviously glad he stuck with football: