It’s Friday, and we’ve made it through another week.  With the weekend now within reach, here’s a look at today’s top stories.

Full 2017 Schedule Now Available – Thursday night revealed how the 2017 Patriots season will play out, and there’s no better feeling than being able to start circling games and looking at how the road to Minneapolis might play out.

The season kicks off with a Thursday night battle with the Chiefs, with five of their first eight games played at Gillette Stadium before the bye, which falls right in the middle of the season in Week 9.

But from there, they’ve got a ruthless stretch and the only break they got from the NFL was the fact they’ll at least have their bye to prepare for it.  They play five of their next six games on the road, including a tough stretch to begin their second-half run.

Coming off the bye, they’ll head to Denver to take on the Broncos on Sunday night football on November 12th, which ends up not only being a tough game for a Patriots team that never seems to have much luck there, but it’s the first of two games in tough conditions.

From there, they head out to Mexico City the following Sunday at 4:25pm to take on the Oakland Raiders.  Coming off of a game where they’re playing at 5,238 feet above sea level, they’ll endure the challenge of playing another 2,000 feet higher south of the border, so it will be interesting to see how Bill Belichick handles that week from a practice/preparation standpoint.

After that, they get one game at Gillette Stadium against Miami before heading back out on the road for games against the Bills, Dolphins and Steelers, before finishing out the season at home against the Bills on Christmas Eve and the Jets on New Years eve.

Overall, when you look at how difficult the final two months of the season are going to be, it will be an incredible badge of honor if New England repeats their normal success over that span.  Those games against the Raiders and the Broncos won’t be easy, with Oakland no longer a pushover and Denver always giving the Patriots fits when the game is in their home stadium.  Then it’s three games against Division opponents who know them better than anyone, followed by a trip to Pittsburgh, and then back home to play two more Division games.

The schedule makers did them no favors and it’s obvious that on paper, this will easily be one of the toughest schedules they’ll play as they try and repeat as champions. Every game after the Bye could potentially have playoff importance since every one is against a Conference opponent. To take it a step further, should any of those teams surprise everyone and contend for the AFC East, they’ll become that much more critical.

Obviously a lot will change before the beginning of the season and even more will be different by the time those final weeks get here.  Either way, it should make for another fun ride that can’t get here fast enough. 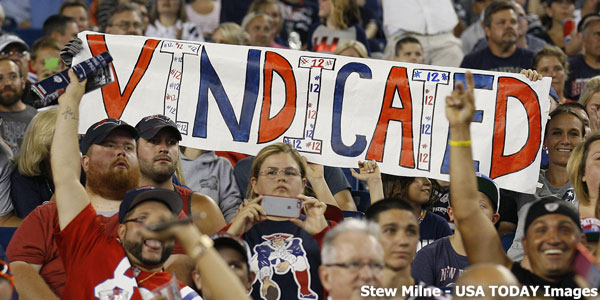 Fans here in New England are used to haters,
especially from New York.

New York Times Editor Apologizes For Wednesday Tweet – As we all know, there’s no love lost between the people of New York and fans here in New England, who with the Giants heading back to the cellar and no hope from the Jets or Bills in sight, are forced to sit back on their couches every January and watch the Patriots make their annual run at a title.

Since it’s been going on for nearly two decades, it’s got to be irritating.  The one team who had given them any hope, the Giants, ran the one man who brought them two championships out of town without realizing maybe it wasn’t their coach that was completely to blame for their issues.  From there, the circus they just endured with Rex Ryan in Buffalo and this bizarre story from yesterday, along with the mess that is the Jets, it all must have the people in charge of the sports section apparently losing their minds.

It’s understandable.  We get it.  We have the late 80s and early 90s to look back on to appreciate what they’re going through. That would be enough to make anyone a little crazy.

So when the New York Times tried to stir the pot a little on Wednesday by comparing the crowd that showed up at the White House this time instead of their 2015 visit, it was definitely a little funny to see what transpired.

They published two photos in a tweet of the 2015 group and the one on hand this week, which they thought was significantly smaller and jumped all over it. Their point was to take a shot at the team, while also insinuating it might have been due to President Donald Trump.

While some players did skip the event for that reason, the overall premise regarding the numbers was immediately shot down after they were called out by the team for not quite having all the facts.

The Patriots’ official twitter account quickly shot back, pointing out a significant point that should have been taken into consideration.

That eventually lead to some serious back-peddling by the newspaper the next day, with the editor at least doing the right thing and owning the mistake on Thursday.

GIve him credit, there were no excuses and he completely owned it.  After all, maybe he’s a Jets fan, which would certainly explain everything since they’re enough to make anyone lose their minds.

As for the Patriots, here’s the full group photo from Wednesday:

As one fan on our forum pointed out, repeated success has had an effect on future attendance, regardless of who was president.  History has shown that the team has had high attendance in their first Super Bowl win after droughts in-between.

As our member, Palm Beach Pats Fan, pointed out on our forum, the “been there, done that” factor came into play for players who had already visited, seeing a big drop off in the years following when they won multiple championships.

As he points out, since virtually no one besides Brady had won a title back in 2015, that explains the higher attendance.  When there are large numbers of players who have already enjoyed the experience, more of them are likely to enjoy what little time they get to themselves during the offseason and skip it.

The numbers don’t lie, and it was a reminder of the type of confusion winning five titles creates in other cities.   Crazy stuff.

Kellerman Felt Patriots Should Have Boycotted Trip – Max Kellerman of ESPN “First Take” is no stranger to saying inflammatory things and on Thursday he went off on another rant about Rob Gronkowski’s humorous drop-in on Press Secretary Sean Spicer. 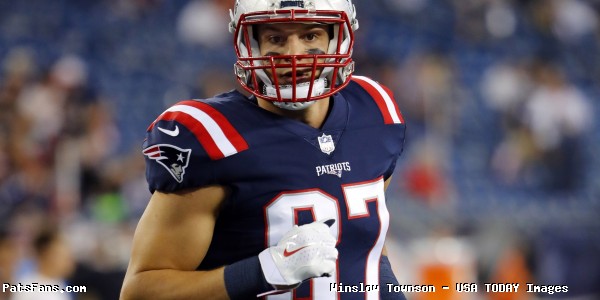 Kellerman wasn’t impressed with Gronkowski dropping in on Spicer this week.

Kellerman felt that what Gronkowski did normalizes the behavior of Spicer, of whom Kellerman is obviously not a fan and he felt they shouldn’t have been there at all.

Here’s what he had to say via BreitBart.com:

When the press corps is cracking up at a press secretary because of an athlete’s presence there, so he’s lending something to the proceedings, the athlete is, and the press corps is, you know, they’re having a rollicking good time, they’re really laughing at a press secretary who in his first press conference, demonstrably lied, shot credibility, I mean your job is to establish credibility with the national media, and completely shot it since his first press conference and it’s gone downhill since there, by the way.

In a scary way, incidentally, especially when there’s a lot of uncertainty about a very unusual administration, how much authoritarian impulse is there — well, when the press secretary comes out and says what you know as a fact is not a fact because now we’re giving you alternative facts, eventually was the phrase, that’s a scary thing. Like wait, what’s going on here? They think that they can just say anything and we’re supposed to take it as true. When that guy is normalized and the press is yukking it up, that’s a very bad thing. That’s an unhealthy thing to have happened.

An unhealthy thing is also saying something repeatedly about a certain player “falling off a cliff” ability-wise, but that’s an entirely different story that we won’t get into.

Have a good weekend everyone. We’ll see you back here on Monday and in the meantime, be sure to check out Steve Balestrieri’s weekly column on Sunday morning.