When it comes to figuring out the offseason moves for the Patriots, saying that they’re one of the most unpredictable teams in the NFL would be an understatement.

Thursday’s start to free agency only further reinforced that, with the team making more headlines thanks to the trade the Patriots pulled off to replace Martellus Bennett, which leaked out  just one day earlier that they were acquiring tight end Dwayne Allen from the Colts.

The fact Bennett wasn’t coming back wasn’t nearly the surprise that learning the Patriots had found common ground with the rival Indianapolis Colts was.  Yet New England managed to fill a key need yet again, setting themselves up to have another offensive weapon in Tom Brady’s arsenal heading into 2017 and it cost them just a 4th-round draft pick.

Bennett said goodbye to the fans on Twitter Thursday and he’s reportedly receiving interest from the Oakland Raiders as well as the 49ers.  As a result, it sounds like he’s headed to the West Coast, with warm weather and a big payday likely in his future.

BUTLER ON THE BLOCK?

But the bigger shock came on Thursday with the news that negotiations of a potential contract extension with Malcolm Butler have seemingly turned sour enough that the Patriots are potentially exploring trading him to New Orleans in a deal for receiver Brandin Cooks.  That in itself is hard to fathom, especially given what a big part of their defense that he’s been.

However, things apparently haven’t been great behind the scenes with New England’s number one defensive back.  According to a report from Mike Giardi, Butler hasn’t been happy with his salary since last spring and the offer he received during the year on a potential extension apparently wasn’t enough and despite being a key part to them winning their fifth title, it didn’t go up after the season ended.  That leaves Butler where he is right now, without the raise he’s looking for and not in control of his immediate future.  As a restricted free agent, the team placed a first-round tender on him, which puts them in the driver’s seat heading into next season, unless another team is willing to give up a first-round pick to obtain him.

The situation got even more interesting Thursday and Butler should really be seething, having learned the Patriots signed former Bills CB Stephon Gilmore to a 5-year deal worth an astonishing $65 million, $40 of which is reportedly guaranteed.  Gilmore, you may recall, was the cornerback in coverage on the bomb Brady threw to Chris Hogan when the Patriots played the Bills on the road this season, who blew by him for the touchdown.

Not that the play was entirely his fault, but the fact the Patriots chose to break the bank for a player who has yet to prove anything in their defense over a guy who has done everything he’s been asked to do doesn’t make a lot of sense.  It’s definitely a puzzling decision and one which likely sends a mixed message to other players in the locker room.

What the future holds for Butler remains to be seen and some believe the move to acquire Gilmore may have more to do with what’s happening with Logan Ryan (who is reportedly garnering interest from Tennessee).  But either way, the Patriots have now set the value of that position in their secondary, and it’s hard not to feel like Butler got the short end of the stick with what transpired Thursday.  It will be an interesting situation to watch because on paper, with Butler still part of the team, the Patriots have one of the best secondaries in football.

Now the only question is how things will play out and whether or not he’ll be a part of it in 2017.

HARMON, BRANCH BACK IN THE FOLD, SHEARD VISITS DOLPHINS

Meanwhile, the Patriots did have some success on Thursday, with Jeff Howe of the Boston Herald reporting that safety Duron Harmon is back in the fold, with the veteran agreeing to a four-year deal worth $17-million, which includes incentives that would earn him up to $20-million.  Harmon has quietly been one of New England’s most consistent players in their secondary and the fact they were able to keep him is their first big success of the offseason. 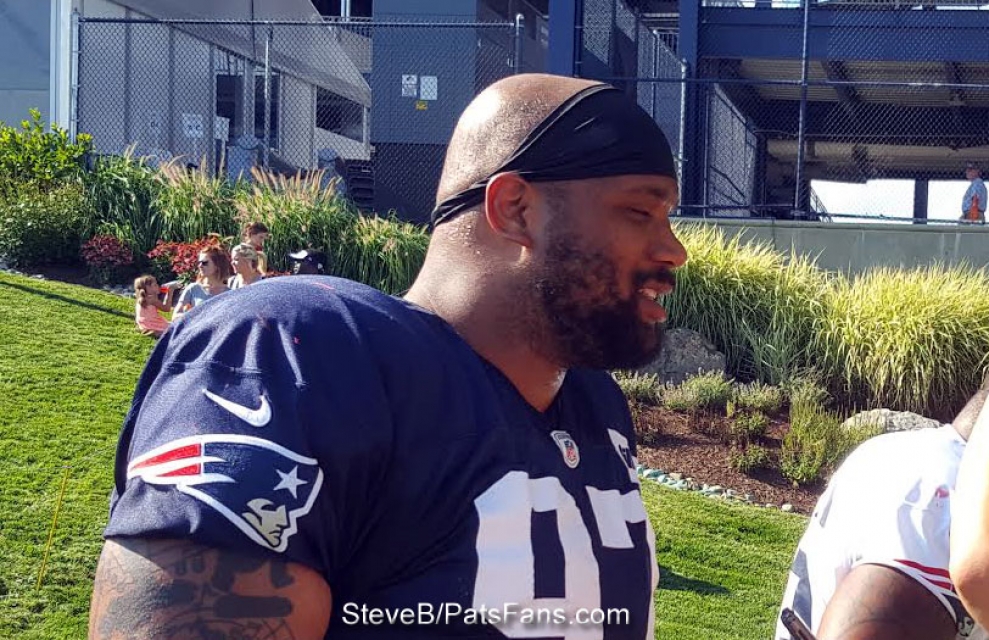 Alan Branch is returning to the Patriots on a two-year deal that was agreed to on Thursday. (SBalestrieri photo)

Their second came when they managed to re-sign Alan Branch to a 2-year deal, keeping one of their most important players up front around for at least a couple of more seasons.

The deal is reportedly worth $12 million and allows New England to keep one of their key components on their defensive line intact for a couple of more seasons.

Meanwhile, Jabaal Sheard remains on the market, with Ian Rapoport reporting that he was in Miami visiting the Dolphins Thursday.

One of the biggest loose ends still hanging out there is linebacker Dont’a Hightower, who is reportedly receiving interest from Miami and Tennessee, seems to be closer to re-signing with New England.

Rapoport reports that the two sides are in good communication and so far, it sounds like the Patriots remain in range of his asking price.  New England reportedly offered him $10 million per season at the beginning of 2016 and so far, according to ESPN’s Ed Werder, the veteran is seeking between $10 million and $13 million.

Keeping Hightower remains one of the biggest keys of the offseason, as Bill Belichick would likely have a tough time trying to fill his shoes considering the fact he’s a respected leader in the locker room as well the guy who is essentially the quarterback of their defense.

For now, it sounds like his return is no longer as big of a long-shot as it might have seemed prior to the beginning of free agency, but there’s still a long way to go before this is over.  He’ll likely continue to receive interest from other teams and hopefully, the two sides can reach a common ground before another club does.