With a win, this evening, either the Patriots or the Steelers return to the Super Bowl for a record ninth time. It just highlights that the two franchises from the AFC continue to play at an ultra-high level while the league is trying to push parity.

The Patriots with a victory are just one win away from title number 5.

On Saturday afternoon, I got to speak with Michigan coach Jim Harbaugh and defensive coordinator Don Brown who were in town to do some recruiting at Grafton High School.  Grafton’s Ifeatu Melifonwu is a CB/S that is a name to keep your eye on in the future. He’s a 6’3, 190-pound senior who is an athletic freak.  While his preferred position is on defense, he scored 25 touchdowns this fall for the Indians who made it to the state title game. His older brother Obi Melifonwu is graduating from UConn this spring and entering the NFL draft. 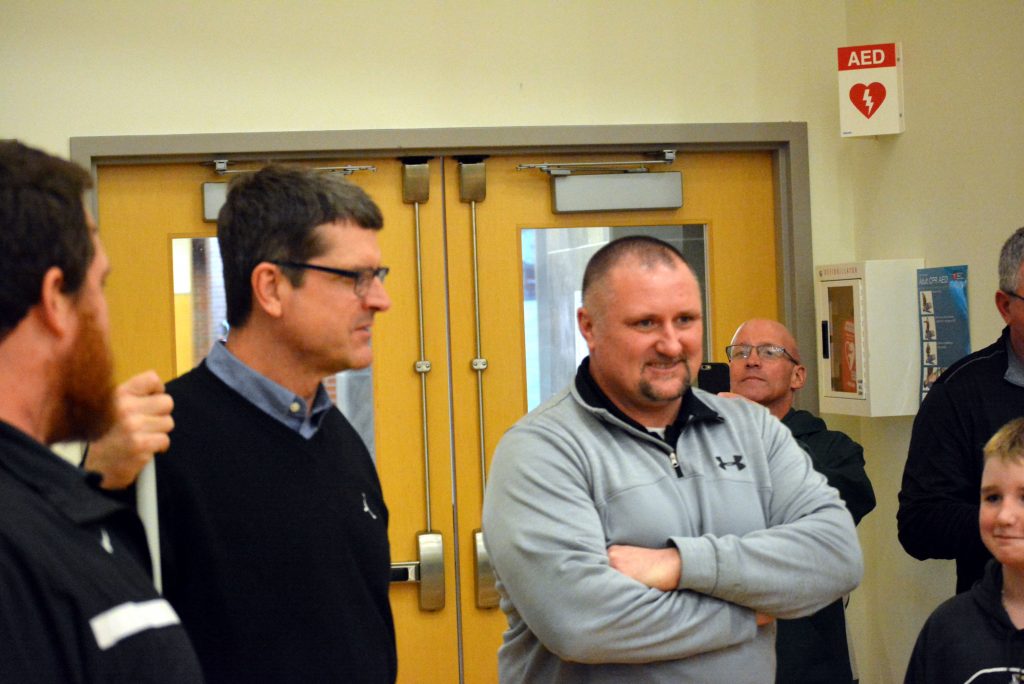 Brown is a native of Spencer, Mass and has four children who still reside in the state. Harbaugh said that the team was already starting their strength and conditioning programs but it would begin in earnest after National Signing Day. For Harbaugh to fly out from Michigan to visit with the young man yesterday, they must have serious interest in him. Harbaugh was relaxed, personable and interacted with many of the fans in attendance after the game.

Chip Kelly to NE? May Not Be So Far-fetched:
Both ESPN and NESN are reporting that the recently fired head coach of the 49ers Chip Kelly may be heading to New England.

ESPN’s Adam Schefter reported that after he interviewed recently for the Jacksonville Jaguars opening at offensive coordinator, one he didn’t get, that Kelly “was headed to New England to meet with Belichick.”

Getting the offensive coordinator position seems very unlikely now with the news that current OC Josh McDaniels will not be taking a head coaching job. One scenario could be with Bill Belichick, giving his good buddy Kelly an offensive assistant role in the booth, until he lands a new head coaching job. He did a similar thing with Packers DC Dom Capers a few years ago.

Goodell Going Back to Atlanta is a Good Thing:
Most Patriots fans want to see Roger Goodell come to New England so that they can vent their frustration on the Commissioner after the Deflategate fiasco.  Goodell, however, has decided to go back to Atlanta for the second week in a row. Wisely.

No good can come from Goodell coming to Foxboro to face the ire of Patriots fans, and it is a possibility that some oiled-up fans may take it a step farther and attempt physical harm to the Commissioner, what one member of the media stupidly called for.

That would be a stain, the kind of which the Patriots and Robert Kraft would never be able to shake. Instead, fans will have to live with the possibility of seeing Goodell hand the Lombardi Trophy to Kraft, Tom Brady, and Belichick if they win tonight and again in Houston in two weeks.

Besides, Goodell is just the spokesman for 31 other owners who were all too willing to buy into the phony science and petty jealousy. They, not just Goodell wanted to exact their pound of flesh from New England. Kraft, in an interview with the New York Times, hinted as such.

“Sometimes the league screws up, and I think they really messed this up badly, Kraft said… “There’s jealousy, there’s envy and there’s stupidity. Sometimes, life is unfair. You have to suck it up, move on and not use it as an excuse.

Patriots Add TE Depth With Housler Signing:
The Patriots are playing for the AFC Championship tonight but have already started planning for 2017 with the move they made on Thursday by signing TE Rob Housler to a reserve/future’s contract.

Housler didn’t play in 2016, being released by the Chicago Bears in the final cut-down to the 53-man roster at the end of training camp. He played from 2011-2014 for the Arizona Cardinals after being drafted in the 3rd Round, (69th overall) of the 2011 NFL Draft.

During his time in Arizona Housler caught 105 passes for 1133 yards and a touchdown. In 2015 he spent time with both the Browns and Bears. Looking ahead to next season, his roster spot may hinge on whether or not the team resigns Martellus Bennett. Rob Gronkowski is returning from injured reserve and the team still has Matt Lengel and Michael Williams who went on IR.

Who Do You Like Today:
After last week’s Divisional Playoffs I went 2-2, having whiffed on Dallas and KC which puts me at 5-3 in the postseason. I’m sticking with the Patriots at home and Green Bay with the big win on the road against the Falcons.

Williams played in 15 games during the 2016 season for the Bills, notching 64 tackles, 5 sacks, 15 quarterback hits and 11 tackles for loss. Williams has tallied 40.5 sacks in his career—the most by any defensive tackle in Bills team history.

Dolphins to Play the Saints in London:
The Miami Dolphins will be playing in London again in 2017, playing the New Orleans Saints at Wembley Stadium.

The game will be played in either Week 3 or 4 on September 24 or October 1 according to NFL sources this week.

Another game to be played in either Week 3 or Week 4 at Wembley Stadium will be between the Baltimore Ravens and Jacksonville Jaguars. The Dolphins will lose one of their home games in Miami as they’ll be dubbed the “home team” for the Wembley contest.

Teams traditionally get a bye week after playing in London so Miami’s bye week will be an early one in 2017.

Two other games, to be played on Week 7 or Week 8 at Twickenham Stadium, will be between the Minnesota Vikings and Cleveland Browns, and between the Arizona Cardinals and Los Angeles Rams. Those game dates will be Oct. 22 and Oct. 29.

Former Jets’ Great Gastineau Has Dementia:
The Jets released the sad news that former defensive line great, Marc Gastineau is suffering from dementia, Alzheimer’s disease, and Parkinson’s disease. The former DL, now 60, admitted this in a radio interview this week.

Gastineau, speaking to WOR Radio in New York, he was pushing the USA Football’s Heads Up program to promote safety in the sport.

”When my results came back, I had dementia, Alzheimer’s and Parkinson’s. Those were three things that I have. … It’s something that I want every player that goes out and plays to be protected in the best way they can be protected,” Gastineau said.

ESPN posted a transcript where Gastineau claims that his own playing style was the cause of his brain injuries and that the new USA Football program will make it safer for kids, including his own, to play the game safer than when he played.

“I led with my head all the time,” he said. “Do you remember Marvin Powell? He was one of the best linemen in the NFL. He and I used to have wars [in practice]. … People would come and gather round because when we hit each other, I mean, you would hear pops, like a shotgun going off.”

”I’m not going to say that I’m not going to let my child play when I know there are techniques out there that if I would have had them, I know that I wouldn’t have the results that I have now,” he said.