6 years ago at 8:35 am ET
Follow @SteveB7SFG
Posted Under: Patriots Commentary 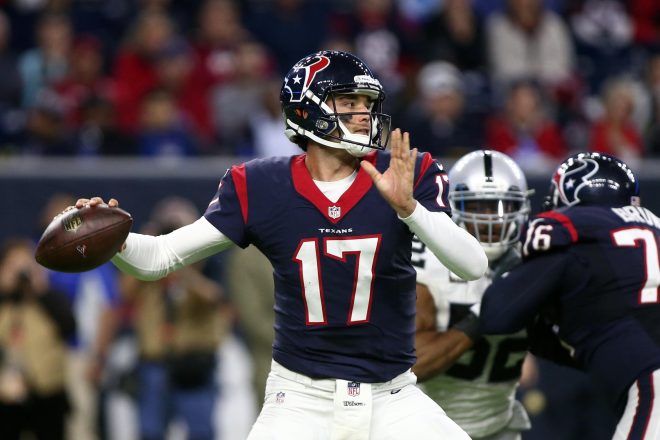 The Patriots return after their bye week for the Divisional Round of the 2016 playoffs to take on the Houston Texans. The two teams will meet on Saturday night at 8:15 p.m. in Gillette Stadium and the broadcast will be aired by CBS.

The two teams met back in Week 3 of the NFL season with the Patriots taking a 27-0 shutout win at home with Jacoby Brissett under center. However, the Patriots, especially QB Tom Brady have been quick to point out that Texans have their respect particularly the Houston defense.

Many of the players and fans will point to the overconfidence of facing the Jets after the 2010 season and just a little more than a month after the “Butt Fumble” blowout. The Jets shocked the 14-2 Patriots that year in Foxboro.

Here are our further Five Impressions of the Texans:

Osweiller Back At QB…For Now: When the Texans signed Brock Osweiler away from the Broncos, they thought they were adding a franchise QB to the team that would lead them for years to come. It has been a rough year for the big, tall QB.

Houston was just 29th in passing in the league in 2016, averaging only 198.5 yards per game. Back in September, Osweiler was on par with those numbers completing 24 of 41 passes for 196 yards with no touchdowns and one interception. He was benched late in the season for Tom Savage, who played well. But Savage was sidelined with a concussion, and it Osweiler begins to falter, he may have a short leash.

Osweiler played well last week in the Wildcard Game against the Raiders. In the first half, he completed 12-18 for 146 yards and a touchdown and appeared much sharper than he had been for most of the season. In the second half, the Texans scaled back the offense because A. they had a lead and B. because the trust factor wasn’t there for Osweiler and they didn’t want to allow Oakland back in the game with a turnover.

This week, facing Tom Brady and the Patriots offense, they shouldn’t have that kind of luxury and Osweiler will be expected to produce far more if the Texans want to advance.

Miller May Be the “X-Factor” for Houston’s Offense: Back in September, we wrote here that Lamar Miller, signed as a free agent from the Dolphins was a great pickup and would be a big upgrade in both the running and passing games for the Texans.

And he indeed was, he carried the ball 268 times for 1073 yards and five touchdowns for the Texans this season. He added 31 receptions for 188 yards and a score thru the air in 14 games. He missed time at the end of the season due to an injury but returned for the Wild Card matchup and was able to boost the Houston running game. He carried 31 times and ground out 73 yards and a touchdown against Oakland last week.

Houston was the 8th ranked rushing team in the NFL this season averaging 116.2 yards per game. The Patriots were the #3 team against the run this year allowing just 88.6 yards per game. If Houston is going to pull the upset here and advance, they’re going to need a big game from Miller, both in the running and passing games to take the pressure off Osweiler. Miller had 80 yards on 21 carries in the first matchup here.

Clowney, Leads the “Big 3” For the Texans Defense: With J.J. Watt on IR this season, placed there right after the New England game, the pressure was on the rest of the unit to step up. And it started with the former #1 pick DE Jadaveon Clowney. Limited by injuries early in his career, the “Bust” label was being tossed around when discussing the athletic freak from South Carolina. But no longer.

He came on at the end of the 2015 and topped that off with a very impressive 2016 logging 40 tackles and half a dozen sacks. He’s athletic, strong, and very fast off the edge. He can disrupt and blow plays up, as we witnessed against the Raiders last week and be a game changer for this defense. He’ll be matched up against Nate Solder for much of the game and will be a handful for the veteran left tackle.

Whitney Mercilus is the outside linebacker on the left side for Houston and he leads the team with 7.5 sacks on the season. He gives the Texans bookend pass rushers that can get after the QB and disrupt the opposing team’s offensive rhythm. He’ll be going against Marcus Cannon this week.

Benardrick McKinney was singled out by Bill Belichick for praise this week, as the Patriots were very interested in the Mississippi State linebacker when he came out of college for the 2015 NFL Draft. Belichick was effusive in his praise for the big LB, stating, “He’s a very good football player,” Belichick said. “We did a lot of work on him coming out of Mississippi State. He’s the kind of player that played outside and inside linebacker.”

“He also played a little bit at defensive end, is an excellent blitzer, runs very well, is long. He’s 6’4 so he gets to a lot of plays with his length, particularly in pass coverage, a hard guy to throw over or around, a very good tackler, good range, good speed, good instincts, good wrap-up tackler… It’s very unusual to find a player with his skills that can do so many things in the running game, in the passing game, on the line, off the line. He’s an excellent player, one of the best players we’ve played against all year. He played well against us.”

In the first meeting between the two teams, McKinney logged 16 tackles and a sack of Brissett. The Patriots may look to counter the linebackers of Houston, (McKinney, Mercilus, and Brian Cushing) by putting them in space and forcing them to cover the tight ends and running backs this week.

Tight Ends Key to the Passing Game: When the Texans drop back to pass, the focus will naturally be centered around their most talented pass catcher, WR DeAndre Hopkins. But to be successful, Osweiler will need to get his tight ends involved.

Houston has two big tight end targets in the passing game and both have been effective. C.J. Fiedorowicz caught 54 passes for 559 yards and four touchdowns in 2016. Ryan Griffin made 50 catches for 442 yards and a pair of scores. When the Texans need to move the chains, Osweiler will lean on the big men in the middle of the field. The Patriots have had issues in the past at covering tight ends and these two should see plenty of targets.

Hopkins will see plenty of looks outside, he was targeted 151 times on the season, but the Patriots will look to take him away with bracketed coverage. Will Fuller the speedster from Notre Dame got off to a hot start with a pair of 100-yard games to begin the season, but more than half of his production was logged in the first four games. He will need better production this week.

Osweiler has to get into a rhythm this week, and to do so and beat a Patriots defense that will force them to work their way down the field, they’re going to need their tight ends to step up and move the chains.

If Texans Seem to be Familiar, They Are: In September, we wrote the Texans were really a Patriots-South coached team with a lot of familiar faces on the staff. The level of familiarity between the two staffs was startling. Once again…

There are a lot of Patriots connections with the Houston Texans and head coach Bill O’Brien is building himself a team on a solid foundation of New England talent.

O’Brien was the QB coach and the offensive coordinator with the Pats from 2007-2011. Defensive Coordinator Romeo Crenel started in New England as the DL coach in 1993 and became the DC here from 2001-2004, including the first three Super Bowl wins.

Texans offensive coordinator George Godsey was the Patriots tight ends coach and was here from 2011-2013. Linebacker coach Mike Vrabel is one of the hottest coaches in terms of getting top job offers. He was a standout member of the Patriots during the first three Super Bowl winning teams as a linebacker and goal line tight end. Special teams’ coordinator Larry Izzo was a standout STs player on the Patriots between 2001-2008.

And of course, the biggest Texan of them all is Vince Wilfork. The big man spent 12 seasons with the Patriots. Wilfork played in 158 games and tallied 517 tackles, 16.0 sacks, three interceptions for 48 yards, 35 quarterback hits, 28 tackles for loss, 12 fumble returns, four forced fumbles and 26 passes defensed.

When looking at the organization that O’Brien is building around him in Texas, it is easy to see where the emphasis on creating a winning atmosphere is coming from.

By: Robert Alvarez
The Patriots show off their customized cleats for the NFL's annual "My Cause, My Cleats" campaign over Instagram.
12 hours ago

By: Russ Goldman
In this episode, we look back at the loss to the Vikings on Thanksgiving, and later on, we preview the upcoming game against the Bills.
20 hours ago