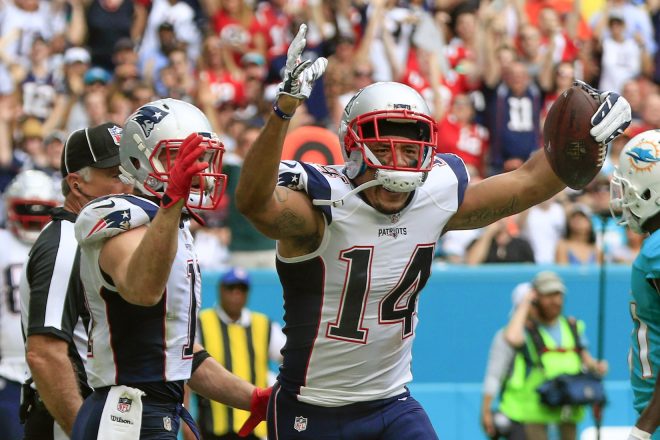 The Patriots took care of business on the road in Miami on Sunday, coming away with a 35-14 victory and securing home-field advantage for the playoffs. And securing that top seed means that the Super Bowl goes thru New England this season.

It was the first time in four tries that they’ve won in Miami and also capped off a fantastic season on the road for the Patriots. They become the seventh team to go 8-0 on the road in NFL history. The 2007 Patriots also were undefeated away from Gillette. The 14 wins marks the 27th time that a team has won 14 or more games in a season.

Other observations from today’s game include:

NFL Field or Farmer Field? The field conditions in Miami were…. less than ideal. The field was torn up from the Orange Bowl on Friday night and resembled a goat path. Bill Belichick was reportedly livid about the conditions which were ridiculous for an NFL game. Although players from both sides were slipping during the game, no one was injured, something we were having flashbacks of 2009 in Houston when the discussion of the playing surface was being discussed prior to the game.

If Miami is going to host the Orange Bowl in the future, they should consider field turf. The NFL is always touting player safety and this was a prime example. The Patriots hosted six high school championship games the day before the Rams game, and the field was in perfect condition…. Just some food for thought.

Brady’s Play Continues to Amaze: Tom Brady was razor sharp again completing 25 of 33 passes for 276 yards and three touchdowns. He hit a couple more career milestones on the day. He passed Dan Marino for career yardage in the first quarter. Brady, Jimmy Garoppolo, and Jacoby Brissett also set a new mark in the NFL throwing just two interceptions on the season. Brady’s mark of 28 touchdowns against just 2 interceptions also set a new NFL record for TD to INT ratio, beating Nick Foles mark where he tossed 27 TDs against two picks in 13 games.

While I’ve never been a big fan of the MVP award, because the entire process can too political (and it will be again this year), Brady’s performance, as it has been all year was the epitome of what the MVP award should be. Smart, cool, playing at an insanely high level and leading your team to the best record in football. That being said, he probably won’t win the award. He won’t care, he’s never been about individual accomplishments unless they’re tied to team success.

What Does the Win Mean? For starters, this Patriots team showed that it is mentally and physically tough and could take the best shot any team could give on the road and come out on top. Last season the team failed to win big games on the road in Denver and trying to close out as the top seed by winning at the Jets and Miami in the final two weeks of the regular season.

Fast forward to 2016, the Patriots went back to Denver and took care of business. Then facing the Jets and Miami again to finish off this season, they finished what they set out to do and won’t go back out on the road again unless they go to Houston for the Super Bowl.

With Oakland’s loss in Denver and the subsequent loss of backup QB Matt McGloin to a shoulder injury, the Pats could face either QB Tom Savage (Hou) or Connor Cook (Oak) in the Divisional Round. Miami could come to Foxboro for the Divisional Round but would have to upset the Steelers in Pittsburgh next week.

The Patriots dominated for much of this game, Miami showed some resolve at the end of the first half and early in the third quarter when they closed the lead to 20-14, but Brady quickly extinguished any hopes of a big comeback when he put a dagger in their hearts with a 77-yard touchdown pass to Julian Edelman. Brady caught the Dolphins in a blitz and hit Edelman on a quick slant. He got a devastating block downfield by Michael Floyd and raced untouched for a big touchdown.

Edelman Has Career Year: Edelman finished with 8 catches for 151 yards (a career high) and a score. Edelman finished the year with 98 catches for 1106 yards (also a career high), and three touchdowns. It was a fantastic season for the Patriots energizer bunny. After the second surgery on his foot and having a scare during joint practices with the Bears, he played in all 16 games and even had to fill back in at punt returner with Danny Amendola out and Cyrus Jones struggling.

The Patriots were short-handed today, with no Amendola or Malcolm Mitchell, Edelman had to pick up the slack and he did. It wasn’t perfect, he had a drop, his league-leading 12th and took a dumb penalty that cost them a possible touchdown but he’s more than made up for it with his fearless ability to go into tight spaces, take tremendous punishment and still hold onto the ball.

Floyd Catching on Quickly: With Amendola and Mitchell out, Michael Floyd got about 40 snaps (unofficially) on offense today and had a couple of highlight-reel plays. He caught three passes for 36 yards and his 14-yard touchdown was an incredible display of determination. He caught a pass from Brady and carried a slew of Miami defenders into the end zone.

On Edelman’s touchdown, he delivered a knockout blow to Tony Lippett downfield that opened up the field for the score. The Patriots wide receivers must be able to block and the 6’3, 220-pound Floyd delivered a shot that Hines Ward would approve of.

With the playoffs around the corner, Floyd is making a case for himself to be not only involved but be a play-maker as well. He is picking up the offense quickly reportedly with the help of Jacoby Brissett.

Running Game Does Its Job: The Patriots entered the game knowing Miami had struggled with their run defense. And although they didn’t set the world on fire, they ran effectively, especially early in the game where they took control early and put the Dolphins in a hole. The Pats ran 29 times for 120 yards and for the most part, kept the Dolphins defense off-balance.

LeGarrett Blount ran 14 times for 51 yards and finished the season with a new career-high with 1161 yards rushing. And he scored his league-leading 18th rushing touchdown of 2016, a career and team record (are we detecting a trend here?). He also got into a scrape with Ndamukong Suh, more on that here:

Dion Lewis ran 11 times for 48 yards, providing the change of pace and elusiveness between the tackles as the team tries to limit the workload on Blount before the playoffs.

Defense Finishes #1 in Points: The Patriots defense allowed the least amount of points in the NFL this season with 250, it was also the third lowest amount of the Bill Belichick era. After holding their two previous opponents without a touchdown, Miami ended that streak with a late first half touchdown pass from Matt Moore to Jarvis Landry for a 14-yard touchdown. Moore later hit a wide open Kenny Stills for a 25-yard touchdown, his eighth of the year of 20+ yards.

Moore finished 24-34 for 205 yards with two touchdowns and an interception. But they set out what they planned to do and that was limit the big play. Moore was engineering another drive with the score 27-14, but Devin McCourty jarred the ball loose from Damien Williams that was scooped up Shea McClellin and returned 69-yards (another Patriots record) and turned into Blount’s touchdown run.

The defense also did a good job of bottling up the Dolphins Jay Ajayi on the day. A week after torching the Bills for 206 yards, Ajayi managed 59 yards on 16 carries for just a 3.7-yard average. Miami as a team rushed for just 75 yards.

The Patriots will get the bye week to heal up, do some self-scouting and get some much needed and earned rest.