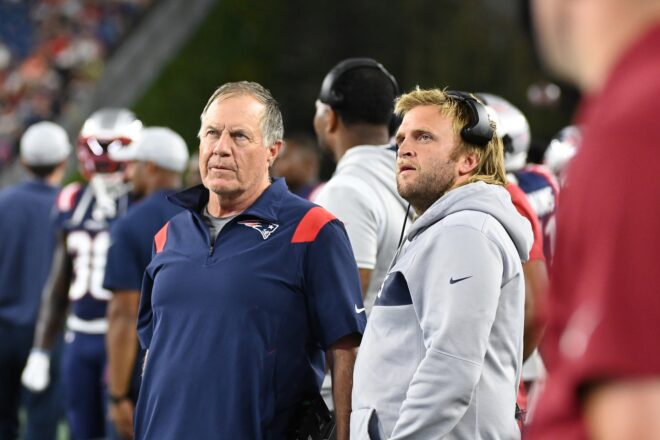 We start where we left off last week.  The 1st joint practice was extensively covered.

Next play Wilkerson is hit out of bounds.  Panthers coach shoves Wilkerson who turns and says something.  Wilkerson gets jumped by several Panthers players.  Patriots come to the aid of their teammate. Wilkerson, Bourne was thrown out.  Only Kenny Robinson of Panthers was thrown out.

Kick-off / Return teams agree to run at ¾ speed.  Kenny Robinson decides to run it full speed and knocks Kristian Wilkerson unconscious.  He stands over the injured Wilkerson and taunts him. Patriots have words but it doesn’t escalate.  The next play is a sweep by McCaffrey towards the Patriots sideline.  Deatrich Wise tackles McCaffrey near the sideline.  McCaffrey takes exception and throws the ball at Wise which precipitates the brawl.  Wise is surrounded by 5 Panthers players and driven back into the stands where a woman spectator is hit with a helmet.  Where were Wise’s teammates?  They were trying not to escalate the situation.

I am not buying that it was an undisciplined reaction by the Patriots.  They were standing up for their teammate.  That’s a good thing.  The Panthers are garbage and their cheap-shot ways are going to make them the most penalized team in the league.

I like the theory put forth by Greg Bedard of the 56-man roster.  Three veterans will be cut, and since they do not have to pass through waivers, will hang around Foxboro to be signed back to the roster or the Practice Squad.  The Patriots did this last year with Nick Folk and Brian Hoyer.

I had Kevin Harris making the team but he has really done nothing in camp.  The surprise has been Ty Montgomery and the versatility he can bring to the offense.  Montgomery has been used in the 2-minute offense.

In the Pre-camp projection, I had Agholor being traded to save money on the camp.  In the last couple of weeks, he has been outstanding, showing quickness and the ability to make circus catches.   Tyquan Thornton has been further advanced than we were all led to believe.  We knew he had speed and a pencil-thin body.  He has shown excellent moves, an ability to beat DBs off the LOS, and the ability to adjust to passes in the air.  However, the first real hit he takes and he is now injured with a shoulder problem (collarbone).  He is looking at 8 weeks of recovery time which means he goes on short-term IR after he makes the 53-man roster.  He has jumped to the #4 WR.   Has anyone seen Kendrick Bourne?  I expect we are going to see his face on milk cartons this week!  Chances are he will be traded.  According to Phil Perry, several teams have inquired about Patriots receivers that might be cut.

Tre Nixon plays on Special Team and Bourne doesn’t.  If both players are even, the ST work is the deciding factor. Kristian Wilkerson may end up on IR because of that senseless hit by Panthers Kenny Robinson.  He has a concussion and the team doesn’t know how long he will be injured.  He might be a candidate for making the 53-man roster and cutting a veteran player (Ferentz and Cody Davis come to mind).  Then add Wilkerson to the recallable IR, and re-sign the veterans before the 1st game.  Bourne was forced out of a rep in practice this week by an official that said his uniform wasn’t up to the requirements (I think he wasn’t wearing any knee pads).  Belichick was furious over this and chewed out WR coach Troy Brown.  Then Bourne gets tossed out for fighting.  I think Belichick made an example of him by not letting him dress and holding him out of Friday’s exhibition game.  I don’t think Bourne is long for this team.

I have added Humphrey as a Move TE.  He had 5 catches on 6 targets for 71 yards and that great play diving to keep the punt from going into the end zone.

I have been back and forth on Russey.  For most of camp, he just hasn’t impressed.  Then he went out last week and shines in the joint practice.  His play in the game was terrific but unheralded.  Ferentz is a solid veteran backup and will be cut and brought back before the 1st game.  Surprised that Ferentz got the start at RG against Carolina.

The Patriots needed a backup G and Arlington Hambright has stepped up and taken that position.  Desjarlais was my pick in the Pre-Camp report.  Hambright finished the game at Left Tackle, another plus for him.

Tackle  (4) I.Wynn, T.Brown, Y.Cajuste, J.Herron.  Herron has an injured knee and might be another candidate to be IR’ed after making the 53-man roster.  The injuries to Wynn and Herron concern me.  Luckily Owenu can play RT.

This is a different team with Davis in the middle.  He is a true space eater.  I didn’t want to keep 6 DLineman, since the team is rarely in a true 3-4 defense anymore.  The majority of the time they are in these hybrid defenses to counter the three WR/Running QB offenses.  Roberts has just played his way onto the team.  If cut he will never make it through waivers

Wilson is more like one of our safeties (Peppers, Dugger, or Phillips).  Tavai is making the team because of his Special Teams contribution.  McMillan has had another good camp.  I hope he can stay healthy.  The improved speed in the LB corps is very noticeable.  I had McGrone in my projection before camp.  He has not shown up in practices.  Candidate for PS.   I saw an interesting theory this week (Mike Reiss?) about moving Bentley to the edge.

Jennings is one of the bigger surprises so far in camp.  Ronnie Perkins was on my pre-camp projection, but he too has been invisible.  He looks like a physical presence, but that just doesn’t translate to the field.  He has been tossed around by the O-lineman.  Don’t forget that the 3 Strong Safeties play a hybrid linebacker.  Mitchell has really come on but there is no room for him,  Hopefully he can get through waivers and make his way to the Practice Squad.

What a competition this has been.  The two rookie Jones boys have been more advanced than we were led to believe.  Mills has been the best DB in camp.  Jon Jones has been moved to the outside which has freed up Myles Bryant to the slot corner.  Both Bryant and Marcus Jones can Punt Return.  Bethel is outstanding on Special Teams.  I am keeping Wade over Mitchell.  The Pats gave up a 5th round pick for Wade to get Wade from Baltimore last season.  I am cutting Justin Bethel since he is basically a Special Teams only player.  The Jones boys, Humphrey, and Nixon can all vie for the gunner opposite Slater.

This is the strongest group on the team.  The Patriots will be cutting DBs that will be picked up by other teams.  Bledsoe has been a big surprise because we had not seen anything of him last year.  Bledsoe was hurt and came back to practice and showed well in that time, but was not activated.

Cody Davis is a candidate to be cut and brought back.  He led the team in Special Teams tackles.  Schooler is being groomed as the next Special Teams ace and has been compared to Nate Ebner.  Davis and Slater have been spending a lot of time with him.  I had Schooler making the team in my pre-camp projection.  If he makes the team he will continue the streak of having a UDFA making the team for 19 straight years.

J.Cardona the long snapper will be cut and because he is a veteran does not have to clear waivers.  He isn’t going anywhere.  He will be re-signed before the 1st game.

after 53 Man roster is established

Note: DT Daniel Ekuale is facing a 4 game suspension.  I believe he has to make the 53-man roster before he can start serving his suspension.   I presently don’t have him making the team.

The general observation is that the starting offense should have done better against Carolina backups.  Mac Jones was way off his game and with exception of the 45-yard bomb that he dropped in the bucket to Nelson Agholor he was way off target.  One pass play that was not Jone’s fault came off a pass over the middle on a delay route by Stevenson out of the backfield.  It appeared to be Stevenson’s fault for not looking back fast enough.  The offensive line was a mishmash of players.  Trent Brown was given the night off (not injury related) had Cajuste at LT, Strange LG, Andrews C, Ferentz RG, and Owenu RT.

Starting Defense looked good and held Carolina backups to 3 points.  That FG was set up by a 21-yard catch by TE Ricci with Tavai nowhere near him in coverage.  Tavai is a liability on defense and is strictly a Special Team player in my opinion.  To add injury to insult, Barmore was called (rightfully so) for roughing the QB with a completely unnecessary hit when the QB was in his way to get downfield.  That is the kind of undisciplined play that will get the team in trouble.  Later Ferentz was called for a late hit that was borderline at the end of a play.  I can live with that kind of hit, showing the Patriots are trying to play to the whistle.

The second and Third team defenses played exceptionally well.  In total, the Defense gave up only 192 yards.  They had 5 sacks, 2 INTs, and a fumble recovery.

Note:  Kendrick Bourne made the trip to Las Vegas.  Heat in Las Vegas could be a factor.  Tuesday through Thursday, 102 -105.  Practices are scheduled for around 11:45 EST.

Transactions: Malcolm Butler and Joejuan Williams go on IR.  Devin Hafford and Jalen Elliott were cut to get down to 83 players.

Hard to believe….. the DL you refer to is suspended for 2, not 4, games and does NOT count towards the 53 man roster. Great lapse and lack of professionalism for not knowing and not researching.

By: Russ Goldman
In this episode, we look back at the Patriots loss to the Packers, and then we look ahead to the Lions game.
2 days ago
wpDiscuz