6 years ago at 8:40 am ET
Follow @IanLogue
Posted Under: Uncategorized

Brady and Belichick Create a Stir With Trump Comments – When we eventually look back at the 2016 presidential campaign, it will likely go down as one of the most divisive in the history of the country and here in New England, it even seems to be dividing the fan base.

On Monday night heading into Tuesday’s election, Donald Trump read letters of support from both Bill Belichick and Tom Brady, igniting a firestorm of backlash from fans here in New England that lead to the quarterback’s Facebook page getting hit hard by people who were upset that he was supporting him.

“Tom Brady, great guy, great guy. Great guy, great friend of mine — great, great champion. Unbelievable winner,” Trump said at a rally in Manchester, New Hampshire Monday. “He called today and he said, ‘Donald, I support you, you’re my friend, and I voted for you.  And I said, ‘So Tom, you voted for me, you support me, am I allowed to say it tonight at this massive crowd in New Hampshire?’ He said, ‘If you want to say it, you can say it.’ OK? Tom, that’s what a champ is all about.”

He said he received the same type of letter from Belichick, who initially asked him not to read the letter he sent, instead requesting the chance to send a different one, which Trump said ended up being even better.

“I figured he was going to take all the good things out, like most gutless people do. Gutless,” Trump said about Belichick initial request. “But he’s the opposite. He’s a champ. So he sent me the new letter and it was much better. It was stronger!”

Those revelations made national news, with much of Tuesday being spent with the media focusing on the coach and quarterback’s candidate choice.  For some reason, it became an important enough topic where the national media jumped all over it, which drew mixed opinions from people who clearly had different views.

Locally, the biggest topic of discussion centered on the fact it was potentially a distraction heading into Sunday’s game against the Seahawks.  It’s a little hard to believe that it became as big of a deal as it did, but given the current climate as it pertained to the election and it’s a reminder that not even the greatest coach and quarterback were immune from the mess that was this election.  With Trump coming away the victor, it will likely soften public perception a bit and erase those issues.

Either way, it was another colossal waste of time with a topic of discussion the media will likely try and address when the two take the podium for their weekly press conferences on Wednesday.  For Brady and Belichick, the answers will likely be nearly identical.

With the bye week behind them, they’re on to Seattle. 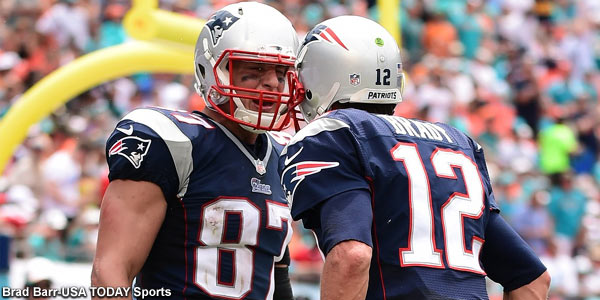 On the season they’ve given up a total of 134 points, just two more than the 132 New England has allowed.  However, the Patriots appear to be catching the Seahawks at the right time because their defense has been having issues getting off the field on third down since the overtime tie against the Cardinals.

Since that game, the Seahawks have allowed 50 points and are having difficulty stopping opponents on third down, which included a 12-of-17 (71%) performance Monday night against the Bills.  The week before they allowed 9-of-15 (60%) in a loss on the road to the Saints.

Meanwhile, the Patriots are coming off a performance where they converted of 9-of-13 (69%) against Buffalo in their blowout 41-25 win in their last outing.  Brady’s playing at the top of his game right now and the fact the Seahawks are being to fly across the country following a Monday night game will hopefully be an advantage.

For now, Pete Carroll believes the adversity his guys have gone through should make them stronger moving forward.

Team Holds Rare Tuesday Practice – After some time off, it seems like the players enjoyed getting away for a bit after a physical first eight games of the season, which will also hopefully help as New England gets set to start the second half of the season.

They practiced on Tuesday, a rare event for a club that usually has their players off that day.  However, everyone seemed to be in good spirits, and they seem to be re-energized as they get back to work.

“Rested up. It was good. It came at a good point in the season,”  Chris Hogan said via Patriots.com. “Now we get ready for the second half. We’ve got a big game coming up Sunday night. It’s easy to get excited for something like that. We’ll spend this week preparing ourselves.”

Players practiced in full pads, with the team’s official site reporting that everyone but rookie defensive back Jonathan Jones suited up.  Dion Lewis reportedly continued to practice, but he’s yet to be activated off of PUP.

Gronk Pays a Visit – We’ll end on this note.  Rob Gronkowski may be fun to watch catch touchdowns and make big plays, but it’s important to point out the impact he makes off the field when he’s not playing.

The veteran tight end has consistently been one of the more involved players when it comes to the time he spends in the community, and he made a special stop on Monday at Boston’s Children’s Hospital to create a few smiles.

Gronk, who was there donning a pajama onesie, spent some time with some of the kids.

Rob Gronkowski made a special stop at @BostonChildrens before getting back on the field. https://t.co/kD7SbSaYJ9 pic.twitter.com/ozAUY4TuDo

The team’s official site also had a nice article on his visit, with some other great photos as well.

Yet another reason to root for a player who gets it done both on and off the field.