6 years ago at 7:38 am ET
Follow @SteveB7SFG
Posted Under: Patriots Commentary 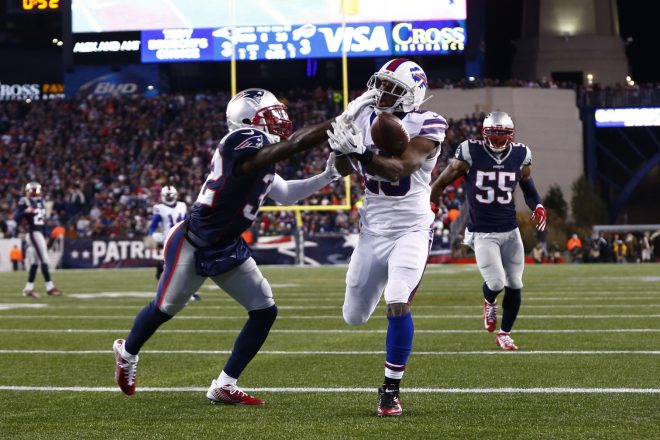 Never a shortage of Quotes During Buffalo Week

The Patriots return to Foxboro for the final tilt of their three-game home stand where they will take on Rex Ryan’s Buffalo Bills. The teams will meet on Sunday afternoon at 1 p.m. and will mark the final game of both Tom Brady and Rob Ninkovich’s 4-game suspension to start the season. Both will be eligible to return on Monday morning.

The Patriots (3-0) beat the Houston Texans 27-0 on Thursday Night Football and have had 10 days off after going with a short week.

Ryan Never One to Back Away from a Microphone:
Bills coach Rex Ryan has never been one to shy away from making statements, many of the bombastic nature. Last week, there was the open talk of him being on the coaching hot seat after a 0-2 start.

When the Bills defense was shredded by the Jets passing game in Week 2, Ryan instead focused the blame on Offensive Coordinator Greg Roman, who was really the only coach capable of taking over if the team decided to remove Ryan. Roman was fired and therefore, Ryan got a new lease on his coaching life in Buffalo, at least for the foreseeable future.

“If Belichick’s playing quarterback, we’re coming after him. I promise you that.”

While his teams always play the Patriots tough and keep things close, he’ll be looking to reverse a trend that belies the prevailing thought that he has the Patriots number. Ryan’s teams are just 4-11 against Belichick and the Patriots. Maybe that’s why on Monday he toned down the rhetoric just a tad.

“The Patriots are the standard of the league, 3-0 without Brady against good teams,” Ryan said. “My admiration is for Belichick more than anything.”

But it is only Tuesday, so expect plenty of more quotable quotes before Sunday’s game rolls around.

Dennis Thurman Will Call Defense but it Remains Ryan’s Baby:
After a bad start to the season defensively, Ryan changed things up and allowed Defensive Coordinator Dennis Thurman to call the defenses on Sunday. The results were startling; the Bills notched five sacks and four interceptions of Carson Palmer in a big defensive turnaround.

Now Ryan says that the play calling will remain in Thurman’s hands but the defense remains his.

“I want everybody to understand that the responsibilities are the same regardless of who the play caller is,” said Ryan. “My input is going to be all over that. So I don’t want all of a sudden the criticism to be on Dennis Thurman. It’s shouldn’t be. It’s my defense, it’s always been my defense and that’s the way it’ll be. Just so you’re aware I’m on the headset constantly. But D.T. did a good job of operating it.”

The Bills thoroughly confused Palmer and the Cardinals, especially in the second half when they trotted out seven defensive backs, with at times four safeties. Palmer threw all four picks in the fourth quarter and had a QB rating of just 36.0. By showing just one down lineman, the Cardinals protection schemes were challenged and the safety blitzes helped result in the five sacks of Palmer.

Bills Running Game Finds Its Groove:
The Bills under new OC Anthony Lynn made a concerted effort to refocus on the running game against Arizona on Sunday and it worked perfectly. After being held to under 100 yards rushing in the first two weeks, the Bills rushed for 208 yards and that as much as the defensive effort was arguably the biggest factor in the Bills win.

LeSean McCoy rushed 17 times for 110 yards (6.4-yard average) and two TDs including a big 24-yard score. QB Tyrod Taylor rushed nine times for 76 yards including a big 49-yard run in the third quarter as the team, missing two of their best WRs in Sammy Watkins and Greg Salas turned to the run and ignited their offense.

The Bills mixed it up nicely, changing the personnel between a mix of “11”, “12”, and “21” personnel groupings, as well as their formation, looks, going with the traditional “I”, empty backfield, the pistol, the Wildcat and even using the direct snap to McCoy as a QB to keep Arizona in the reactionary mode.

But perhaps the idea to go to the no-huddle, up-tempo offense had the most to do with their success. On McCoy’s touchdown run, the Cardinals weren’t ready and the Bills took advantage. McCoy followed his blocking thru a big hole in the line and easily outran his pursuers for the score.

Tyrod Taylor’s Struggles Continue:
The Bills QB who was rewarded with a $90 million-dollar extension this spring, continues to struggle when he has to stay in the pocket and make throws from there. Taylor had a big day scrambling and making plays with his feet, gaining 76 yards on the ground including a 76-yard option run, but he remains, despite his contract, a work in progress.

Taylor completed just 14 of 25 passes for 119 yards with 0 TDs and an interception on Sunday. His 4.8 yards per attempt was very low and he completed just two passes of 10 yards or more to his wide receivers after hitting a couple of deep touchdowns in Week 2. Granted he was missing two of his top WRs in Watkins and Salas, but consistency has been an issue.

The big storyline (sorry Bill), this season was that the Bills were hoping to see Taylor’s evolution as a pocket passer, with them having to limit his running in an attempt to save him for the long haul in terms of health. We still haven’t seen that especially working the middle of the field. Taylor has excellent deep ball accuracy down the sidelines, but until he is able to stay in the pocket and make teams pay with his arm, the QB position will still be a question mark.

Bills Linebackers Will Be a Key for Both Teams this Week:
The Bills defense will no doubt be focused on stopping the run this week. Unlike in past matchups where Tom Brady would throw the ball 50 times for quick strikes to neutralize the Buffalo pass rush, this game will be different. With Brady in the final game of his suspension, the Patriots have been leaning on the power running game the first three weeks. Expect more of that this week, regardless of who is under center for New England.

For Buffalo, their linebackers will be called upon to not only provide the pressure on the outside in pass rushing roles but in stopping the run and setting the edge. Likewise, the Patriots will be trying to get to that second level and target the linebackers in both the running game and to a lesser extent the passing game.

ILB Zach Brown had a huge game on Sunday, making 12 tackles, 10 solo. He’s been a big part of things defensively and has brought his hard hat to work. Preston Brown is also matched up inside. The Patriots will want to get to them at the second level in the running game and target them with either Rob Gronkowski or Martellus Bennett in the passing game.

Jerry Hughes and Lorenzo Alexander will play out on the edge and they can rush the passer. Hughes had a sack and Alexander notched 1.5 on Sunday against the Cardinals. This will be a key area to watch for on Sunday.

By: Ian Logue
With New England sitting with little cap room, something had to give in order for them to get their final three draft picks signed.
2 hours ago

By: Ian Logue
New England Patriots news for 6/24 along with NFL notes.
7 hours ago

By: Ian Logue
The Patriots tied up some loose ends after getting Cole Strange, Tyquan Thornton, and Bailey Zappe each under contract on Thursday.
21 hours ago