It’s a new week, and with the Bills now ready to visit Foxboro this Sunday, here’s a look at this morning’s top stories:

Rex Gets One Win, and Immediately Starts Talking – A loss to the Cardinals on Sunday could have put the Bills in a situation where Rex Ryan might have been potentially coaching for his job this weekend, but instead they surprised everyone with an impressive 33-18 blowout victory for their first win of the season.

Getting back in the win column brought back Ryan’s boisterous ways, and instead of worrying about poking the bear and firing up Bill Belichick and the Patriots, who could drop him to 1-3 this Sunday, Ryan apparently isn’t intelligent enough to keep quiet and has already begun providing some locker room fodder heading into Sunday’s AFC East battle at Gillette Stadium.

“If Belichick’s playing quarterback, we’re coming after him.”

The Bills defense should get the credit for Sunday’s win, picking off Cardinals QB Carson Palmer four times along with recovering a fumble.  On the offensive side of the ball, the Cardinals couldn’t stop running back LeSean McCoy, who rushed for 110 yards on 17 carries as well as two touchdowns.  Of the Bills’ 16 offensive first downs, 11 came via the rush.

One would have to believe the Patriots won’t be as careless with the football, and they’re also tied for 10th in rushing defense with Carolina, allowing an average of 90.3 yards per game.

With 10 days to prepare and the advantage of playing at home, Belichick has a competitive edge even with the Patriots’ problems at quarterback.  That’s one big reason why Ryan should have been smart enough to keep quiet, but as we’ve seen, he’ll obviously never learn.

Today will give us a clue into Garoppolo, Brissett’s Injury Status – Following last Thursday night’s victory over the Texans, it didn’t take long for the next bit of bad news to come out after WEEI’s Mike Petraglia reported that Jacoby Brissett suffered a torn ligament in his thumb that could potentially require surgery.  That dampened an otherwise terrific win by the team and it made the Patriots quarterback situation that much murkier.

With the Bills up next this weekend, the big question will now be who will start this weekend, which will likely make this week long and irritating with conflicting reports all the way up until Sunday about who may or may not play in the final contest before Tom Brady gets back to work next week after his month-long exile by the league.

However, we may find out a little more based on whether or not a move is made on Monday, with ESPN’s Adam Schefter reporting that the team ‘is hopeful and confident’ at least Brissett or Garoppolo, or potentially both, will be available on Sunday.  If that belief changes, Schefter believes the move to bring in a veteran such as T.J. Yates, who visited last week and seems to be the ideal candidate, would happen Monday.  If they don’t, then it tells us that the injury situation is a little more hopeful than we thought.  Having either Garoppolo or Brissett available certainly gives them an advantage since it’s easier to prepare a quarterback who already has experience in the offense and chemistry with their receivers.  If that’s the case, they should be in good shape to finish running the table just in time for Brady to step back in. 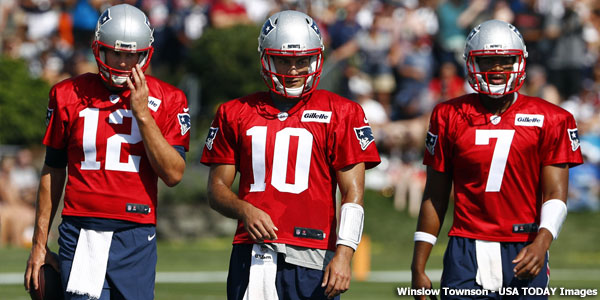 Both Garoppolo and Brissett have exceeded expectations in Brady’s absence.

With the loss by the Jets, Patriots are guaranteed 1st Place – While watching the Bills light up the Cardinals was frustrating on Sunday, the good news was the Jets got completely embarrassed out in Kansas City as the Chiefs rolled over New York 24-3.  Ryan Fitzpatrick threw six interceptions in the loss, including three in the red zone along with one that was returned for a touchdown.  They also committed a miscue on special teams after the Chiefs recovered a fumble on a kickoff that they returned for a touchdown.

That drops the Jets to 1-2 on the season, putting them in a three-way tie with the Dolphins and Bills, who are each also 1-2.  That means that regardless of Sunday’s outcome against Buffalo, the Patriots will be sitting in the driver’s seat in the AFC East just in time for Brady’s return.

That’s certainly an ideal situation to be in, and should they beat Buffalo this weekend, they’ll have an even bigger edge at 4-0 in a division that was supposed to be more competitive this season.

Patriots among five unbeaten teams – With the Patriots having beaten the Texans last Thursday, they join just four other teams with an unbeaten record after the way Sunday’s games played out.

As it stands right now, of the unbeaten teams, the Eagles have scored the most points with 92 through three games, followed by Denver (84), New England (81), Vikings (64) and Baltimore (57).  The fact the Patriots are even in the top three in scoring given they’ve done it all without Brady, as well as having done it mostly without Rob Gronkowski, simply adds to what has definitely been yet another incredible coaching performance, proving once again that Bill Belichick is – and remains – the best in the game.

Belichick Credits Team’s Conditioning For Their Success – One of the things that has stood out through each of the Patriots’ first three games has been their ability to finish teams off, which obviously requires playing a full 60-minutes of football.

That was certainly evident Thursday night when the defense didn’t let up until the final snap, preserving the shutout, which was a nice change from the week before where it took a last-second interception by Duron Harmon to seal the win after a late run by the Dolphins.

Either way, it’s been a team that has played hard until the final whistle, and Belichick credited his team’s conditioning as one of the big reasons why they’re sitting at 3-0 despite not having Brady in the line-up.

“I think that the entire team has conditioned hard and I think that’s reflected in the way that we’ve been able to make some plays at the end of games that we need to make,” said Brady.  “But I think our conditioning is – guys have worked hard on it. We’ve pushed them hard, they’ve responded, they’ve trained hard and they’re ready to play 60 minutes. And that’s obviously what it takes in this league.”

“Our first two games really came down to the final play so that’s mentally being able to concentrate, communicate, execute, make right decisions. Physically being able to do the things physically you need to do at their positons, so yeah, the offensive lines done a good job of that. It’s a well-conditioned group that works hard and does a lot of extra things.”

And it’s the little things that have helped them get to where they are, which is with a winning record for the first month of the season.