6 years ago at 3:05 pm ET
Follow @IanLogue
Posted Under: Uncategorized 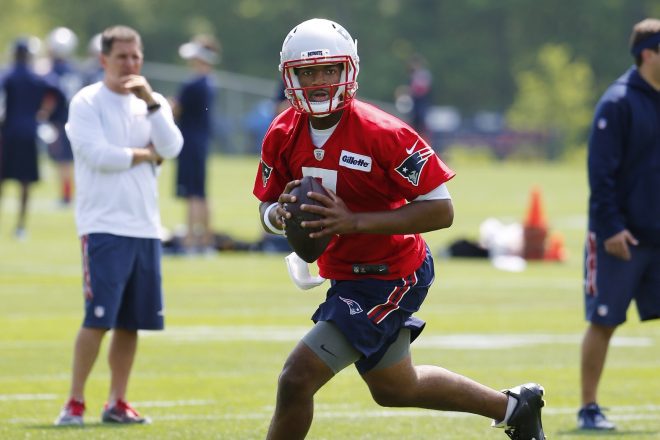 Patriots fans who watched last night’s game likely caught cameras panning to Jacoby Brissett being tended to on the sideline by trainers with what announcers Jim Nance and Phil Simms speculated might have been a thumbnail issue for the rookie.

Unfortunately, news came out on Friday that the prognosis is a little more serious than that.

According to WEEI’s Mike Petraglia, Brissett suffered a torn ligament in his right thumb that likely will reportedly require surgery to stabilize it, which obviously now further complicates what was already a pretty murky quarterback situation.  Petraglia told Dale & Holley that details from there in terms of the timetable on Brissett’s return weren’t known at this time.

That definitely explains some of the throws that were well off the mark by the rookie, who had actually been relatively accurate during what little we saw of him during the preseason.  After the apparent injury, Brissett wasn’t quite up to the level of what we’ve normally had become accustomed to seeing.

The only good news in this scenario is that Jimmy Garoppolo now has some extra time with the long layoff to continue getting treatment for the sprained AC joint he suffered to his throwing shoulder during the win over Miami, which will hopefully have him ready for their battle against the Bills one week from Sunday.  The only question from there will be if New England opts to have Julian Edelman, once again, be the back-up, or if they’ll bring in a veteran to play behind Garoppolo.

Ian Rapoport reports that it’s not serious, and that for now Brissett will continue to be monitored before a decision is made.

#Patriots QB Jacoby Brissett’s thumb injury is not deemed to be a serious one, source said. Will be monitored, but the team has 10 more days

Fortunately it’s only a temporary situation with Tom Brady chomping at the bit to get back in the line-up.  Belichick likely never imagined he’d lose both his second and third string quarterbacks to an injury, and today’s news certainly increases the level of difficulty for a coach who has already done an incredible job to this point.

Thankfully, Belichick likes a challenge.  Now we’ll just have to wait and see how he handles this latest bit of adversity.