Patriots Now at 75 After Cuts – The mandatory cut down to 75 deadline came on Tuesday and the Patriots released three players after collecting the playbooks of LB Ramon Humber, OL Keavon Milton and TE Steven Scheu while also making a couple of additional moves to get them under the limit.

They also put Sebastian Vollmer and Dion Lewis on the reserve PUP list, which were expected as the two players continue trying to get healthy.

The Patriots already had a head start coming into the day, having just 80 of the available 90 roster spots filled, leaving just five moves needed to be made to reach the required limit.

With one more exhibition game to go this Thursday night against the Giants, it’s a big week for some of the remaining players on the bubble before the team is required to cut down to 53 players on Saturday September 3rd.

Mitchell Avoiding “Unnecessary Stress” – Patriots receiver Malcolm Mitchell had been having a pretty good preseason before the elbow injury he suffered in the first preseason game against the Saints, which at the time brought things to a screeching halt for the rookie out of Georgia.

But on Tuesday Mitchell appeared to be a full participant in practice, which is incredibly impressive given how bad the injury looked when it happened where he suffered a gruesome looking dislocated elbow.  Now he looks like he’s getting closer to coming back from what had been reported as a 4-6 injury, and from the time it happened, it didn’t really appear to slow him down.  He was spotted back at practice not long after the injury, wearing a brace on his arm while he got in some conditioning work.

That’s exactly what you always like to see from a player and for Mitchell, it’s the only way he operates as he believes letting himself get down over an injury just doesn’t make any sense.

“I’m not a big fan of hesitating or letting something slow me down. An injury is an injury. You just deal with it,” Mitchell said via Patriots.com. “I think it’s worse if you think about it too much. Obviously, you have to be smart about it, but at some point you’ve just got to let it go and just play. Yeah, I’m trying to get ready for my next opportunity to go.”

“This is a sport where injuries happen all the time. Something’s going to happen [to you] eventually. So, you just take it and have to deal with it. To get frustrated over something I have no control over would be stressful, and that’s unnecessary stress. It can’t help me, it can only hurt me.”

With the news of Aaron Dobson potentially on the trading block, Mitchell looks like he could be the player who finally fills the role Dobson couldn’t quite fit into if the former player from Marshall is shipped out of town.  But for now he seems to be a tough player with a lot of potential, which would be a nice addition to an offense that can never have too many speedy receivers with good hands catching passes. 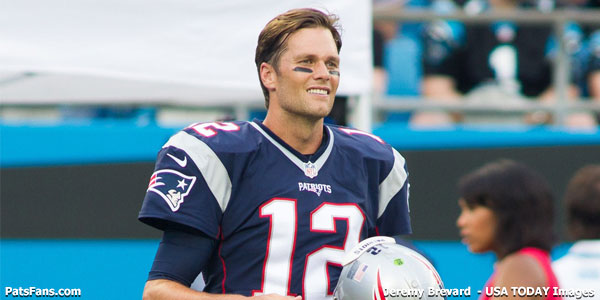 Despite his upcoming banishment by the league, Brady was relatively upbeat on Tuesday.

With Suspension Looming, Brady Staying Upbeat – With Saturday rapidly approaching, the clock is ticking on quarterback Tom Brady, who as of 4pm ET this Saturday will be cut off completely from his teammates until he returns leading up to the Browns game in Week 5.

Brady was asked on Tuesday how he would spend his time in exile, and he kept his plans close to the vest, with the veteran not willing to share how he intends to deal with the next month.

“No, I don’t,” said Brady when asked if he was going to reveal his plans.  “In case someone else is in this situation in the future, I don’t want to give away all my tips.”

The veteran quarterback admitted that he’s going to try and make the best of a bad situation, with the goal to be ready to go when he comes back and steps back into the starting role.

One of the more humorous moments was when a reporter pointed out that the league confirmed that Brady will be able to work with his friend and business partner Alex Guerrero during the suspension, who is a team employee as well as Brady’s body guru.

“Well, that was nice of them,” said Brady when hearing the news that the league confirmed he could have contact with Guerrero.

Brady said the time he plans on taking advantage of those four weeks to make sure he’s at his best when he’s finally able to return.

“We’ve been working together for over 12 years now. He’s one of my best friends, so we’ll do what we always do,” said Brady.  “We’ll use all these days in the best way that’s possible to stay prepared and stay sharp.”

After seeing more action defensively following injuries to Rob Ninkovich and Jabaal Sheard, it’s been a smooth transition as the veteran has seen his time on the field increase, which has allowed him to make a little noise so far this preseason.

Long had a good outing last week against Carolina, including a pass break-up that lead to an interception by Devin McCourty.  Those are the types of plays the Patriots brought him in to make, and he’s proving to the guys around him that he’ll be able to contribute.

“(Long) has made a lot of plays in this league,” McCourty said via the Boston Herald. “I was kind of expecting him to come in and be productive in our defense. He has been a big part so far in the preseason, tipped passes, rushing the passer, playing the run. As soon as he got here, you could see his mentality and how he was, so it doesn’t surprise me. I’ve talked to him plenty of times. He is a hard worker. It’s good to have him on the team.”

It’s been a great experience so far for Long, who admits that being in an environment like this has been enjoyable and he’s looking forward to the upcoming season as he continues establishing a role for himself in New England’s defense.

“I feel good in that I’m working hard every day and really embracing whatever it is they throw at me for my role to be,” Long said. “I kept an open mind. I’ve got great teammates. It’s been really fun. It’s a fun place to play.”

Gronkowski Receives Significant Award – Anyone who knows Rob Gronkowski knows that there’s far more to the veteran tight end than the player they see spiking touchdowns in the end zone and his crazy antics off the field.

In fact, Gronkowski is among some of the most active players out in the community away from the gridiron, and his widespread charitable work helped earn him enough recognition to earn the prestigious Ron Burton award Tuesday night.

Owner Robert Kraft was the person who presented the tight end with the award, and Kraft had high-praise for the veteran who becomes the 14th player to earn the honor.

“Rob is just as fun to watch at a community event as he is on the game field,” said Kraft via Patriots.com. “Giving back to the community is a big part of being ‘Gronk.’ He is engaging with fans of all ages. His gregarious personality makes him one of our greatest ambassadors, especially when spreading cheer to children at local hospitals or schools.”

“We love the devotion and enthusiasm that he shows in the community and are proud to present him with this year’s Ron Burton Community Service Award.”

Congratulations to Gronkowski, who appears to be healthy and on his way to what will hopefully a productive 2016 season.