Edelman Has Another Surgery on Injured Foot:
Patriots wide receiver Julian Edelman had another surgical procedure on the foot that he broke against the Giants last season and this latest one was classified as a “cleanup procedure” but reportedly involved putting an additional screw in his foot.

Despite this latest surgery, the Patriots are stating that Edelman should be ready to go once training camp begins in late July…Don’t bet on that.

Edelman will probably start camp on the PUP list along with RB Dion Lewis who is recovering from ACL surgery. This will be an area to monitor not only this summer but as the season goes along. Many of these foot injuries tend to be on the chronic side.

Cardona May Play After All:
Patriots LS and Navy Ensign Joe Cardona may end up in a Patriots uniform after all in the 2016 season. Secretary of the Navy Ray Mabus a few days ago told Dan Patrick on his show that he has granted approval for both Cardona and 2016 Navy Academy graduate Keenan Reynolds permission to play in the NFL this season.

This came just a short time after Mabus said that the Patriots would probably have to play without Cardona in 2016 due to his naval commitments. Service academy graduates incur a minimum five-year service obligation after graduation.

Secretary of Defense Ash Carter will make the final call, balancing the needs of the service over these two players’ NFL careers and the resultant recruitment potential they would bring in their playing professional football. 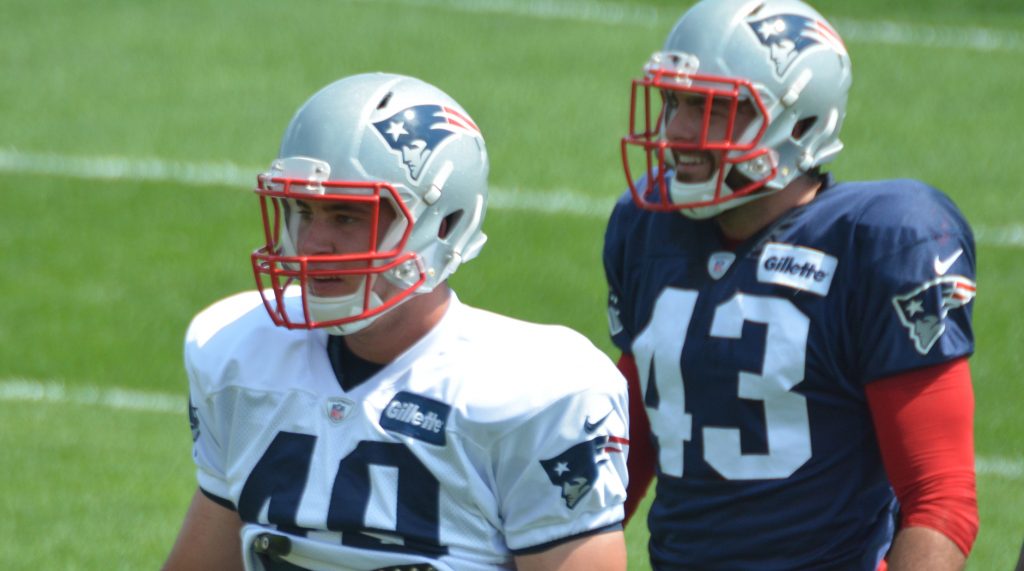 Rookies Got the Memo, Toting the Patriot Line Already:
The Patriots introduced the 2016 rookie class to the media this week and if there is a common theme that could be drawn from any of the comments from any of the newcomers is that they’re all already toting the party line.

Not much could have gleamed from any of the players comments but a healthy dose of “learning the system”, “wanting to work hard” and “fitting in” was the order of the day. Which must have been music to the ears of Bill Belichick who likes his players’ comments bland?

Perhaps the best comments came from the Patriots biggest questioned draft pick, Vincent Valentine the 6’3, 329-pound DT who answered questions about his work ethic and whether he was a reach at #96 when many had him projected as a late round pick or a UDFA.

“It’s their opinion, but they can’t stop me from putting in work every day and bettering myself,” Valentine said. “I kind of tune that out and not pay attention to that as much. I’m in the position I’m at right now for a reason — it didn’t just happen, it didn’t just fall out of the sky. But I’m just excited to be here.”

Valentine went on to state, “The past is the past. I’m going to use that as motivation. I’ve got a lot of things to do out here. But the past is the past. I’m trying to put the whole thing at Nebraska behind me and just become as good as I can here. I’m not really worried about how things went at Nebraska … I know things could have been better … but I’m in a good spot now and I think the coaches are ready to bring me along and I’m ready to be as good as I can.”

Nick Caserio’s comments didn’t exactly put the matter to rest when he stated, “(Valentine) is a massive guy. We’ll get him in here, try to get him going early, get him in shape (highlighted text is mine), and try to take advantage of the things he does well.”

Shouldn’t a 3rd round draft pick already be in shape? He will be interesting to watch, on one hand he squatted nearly 750 pounds but in the 225-pound bench press, he did fewer reps than 186-pound CB Jonathan Jones.

Iosefa Never Left Town, back on the team:
The Patriots waived RB/FB Joey Iosefa last Friday but he was informed that the team needed to juggle the roster some and that, if he cleared waivers, that the team would be looking to bring him back on the roster. This was first reported by Mike Reiss of ESPN.

Iosefa remained put in the area and turned down some offers to work out and sign elsewhere. His loyalty and trust were rewarded when the Patriots indeed signed him back on the 90-man roster following LB Tony Steward’s release.

The 6’0, 240-pound back played in only two games last year but was elevated to instant cult-like status when he bulldozed the Titans’ Coty Sensabaugh during a game in Foxboro in late December.

“Summer of Gronk” Begins, Big TE will grace cover of GQ, Madden 17:
Pats TE Rob Gronkowski has had a busy week. First were pictures of his cover shoot for GQ magazine where it showed the Patriots most visible player frolicking in the surf naked with a supermodel.

Then later in the week, it was announced that Gronkowski would be the first member of the Patriots and the first tight end to grace the cover of the video game Madden NFL 17.

Yesterday was Gronk’s 27th birthday and since he entered the league in 2010, no one has scored more touchdowns (66) than the big TE and he’s already #3 all-time on the TE touchdown list. 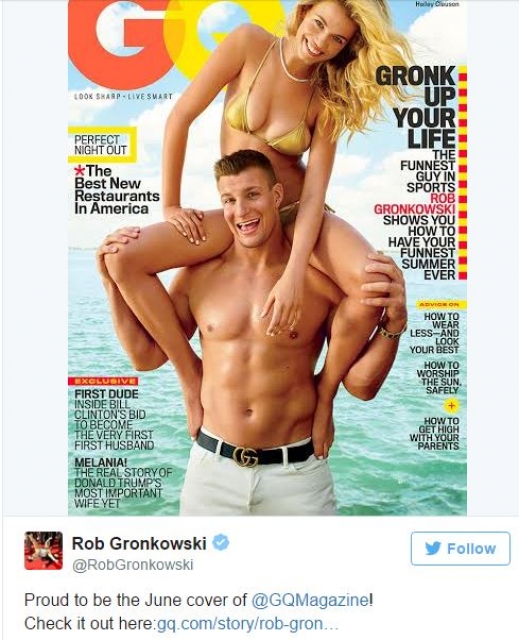 Dolphins Set to Sign DE Jason Jones:
The Dolphins are reportedly flying in free agent DE Jason Jones today and announce his signing tomorrow on a one-year deal according to ESPN’s Josina Anderson.

Jones is a 29-year old run stuffing defensive end who will immediately add depth to a unit that struggled to stop the run in 2015. With Cameron Wake coming off of an Achilles injury and newcomer Mario Williams, Jones can be expected to play a significant role along with Andre Branch.

He had a very productive 2015 season for the Lions with 4.5 sacks and 31 tackles while starting 15 games. He also played one season in Seattle and four in Tennessee. Jones has notched 175 career tackles, with 28 sacks, 10 forced fumbles, and one fumble recovery.

Jets’ Decker in Fitz’s Corner, “Surprised they took a QB:
Jets WR Eric Decker has been vocal in his support for QB Ryan Fitzpatrick this offseason. And while accepting an honor in NYC this week, reiterated his support for the Jets 2015 starting QB and now a free agent.

“I was a little surprised, to be honest with you,” Decker said while being honored by the United Way of NYC. “But Mike [Maccagnan,Jets GM] and his scouts do their research and homework for a reason and they saw something special with him. I guess they wanted him earlier than later.”

With a veteran team built to win now, Decker is firmly on the side of Fitzpatrick in his contract negotiations with the Jets. ” I think he definitely is the right man for the type of team we have now,” Decker said.

“It’s a team that’s ready to win now, and we need someone with a veteran presence at the quarterback position. My job is to catch the ball, but obviously, I want what’s best for the team.”

Bills sign 5th Round Draft Pick, RB Jonathan Williams:
The Bills got a steal in the 5th round with running back Jonathan Williams out of Arkansas. The big, 5’11, 220-pound back dropped so low because he had surgery on his foot that caused him to miss the entire 2015 season.

But he was a productive big back for the Razorbacks, notching 22 touchdowns and rushing for more than 2,300 yards while averaging 5.7 yards per carry. He posted a single-season career high 1,190 rushing yards and forced 44 missed tackles in 2014.