We’re past the midweek point and closing in on the weekend.  Here’s a quick look at this morning’s top stories.

Edelman Undergoes Second Surgery – Patriots receivers haven’t had too much luck when it comes to foot injuries in recent years.

Aaron Dobson’s foot injury during his rookie season in 2013 ended a pretty promising start to his career, and it has since begun a downward spiral that he hasn’t quite been able to pull himself out of yet as he heads into a make-or-break season.  Brandon LaFell went from a pleasant surprise and a key contributor to a Super Bowl win to a player who plummeted down the depth chart after a foot injury last offseason saw him start off on PUP last year before disappearing into obscurity.

Julian Edelman is obviously a completely different player, but the news of the veteran undergoing a surgery recently and having the screw reinserted from his original procedure should raise a red flag for anyone hoping that Edelman will be 100% by the time the 2016 begins.

It’s a tough injury for receivers to deal with, being as so much of what they do depends on their ability to cut and change direction, which applies a lot of pressure to their feet.  According to several studies that looked at midfoot injuries – which is where some have speculated that Edelman’s injury was sustained – the normal recovery following surgery is 2-4 weeks before beginning rehab, while 6-8 weeks are required before being able to realistically play again.

That certainly puts him within the window to be ready for camp, but given the fact he’s already dealt with one setback, one would likely think that the Patriots will be extremely cautious in moving him along.  As mentioned yesterday, Edelman also needs to not be his own worst enemy and not push himself too hard, especially given the type of player he is. 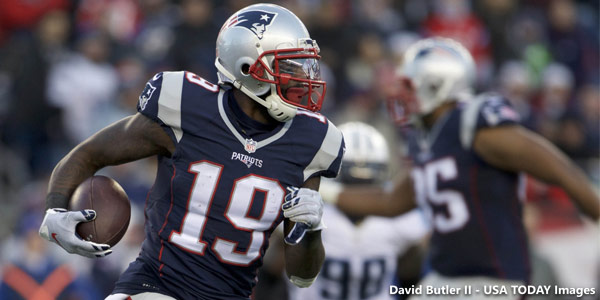 LaFell was one of the Patriots top targets in 2014, before dropping off the radar completely in 2015.

He’s fortunate in that by getting this done now, he’s still got over three months before the beginning of the regular season.  Foot injuries are no joke, and out in Dallas, Dez Bryant is coming off of a broken foot of his own that lead to offseason surgery, requiring a second bone graft.  The prognosis so far has been encouraging after he got a “great report” back in February. But it’s like any other injury, he won’t know how the foot responds until he starts cutting on it, or when he’s wrapped up by a defender who’s trying to pull him down while he’s trying to push off of that foot to try and pick up another yard.

Edelman’s already been down that road having been through recovery once already.  When he came back, he wore cleats that were modified to include a metal plate to try and protect him from re-injuring the foot, but there’s only so much things like that can do.  He just needs time to heal, and hopefully now that he’s had his foot “cleaned up”, these next few months will do the trick.

Foster Excited to be a Patriot – Undrafted free agent running back/receiver D.J. Foster joins a team with a pretty explosive offense, which provides any player with his skillset with a terrific opportunity to shine and get noticed.

In college the former Arizona State standout caught 59 passes for 584 yards and three touchdowns, while also carrying 55 times for 280 yards and a touchdown.  He’s a versatile player who gives the Patriots some options in terms of where they can line him up and attack opposing defenses.  That’s certainly a good thing, and Foster told Patriots.com that being a receiver taught him a lot about being a better offensive player.

“Moving to wide receiver helped me kind of broaden my view and perspective of the game,” Foster said. “I learned a lot at receiver. I learned a lot being in the receiver room, understanding defenses better as a receiver, and it overall helps me as a running back. They correlate with each other, and I definitely think it benefited me in the long run.”

It’s a great story, and watching an undrafted guy like him always adds a nice storyline to follow in preseason.  There’s still a long way to go and he’s got some work to do, but he definitely sounds like a player who may be worth keeping an eye on in the coming months.

Brissett hard at work – Coming into New England, NC State Quarterback Jacoby Brissett fell into an interesting situation given the uncertainty surrounding Tom Brady’s availability for first quarter of the 2016 season, which could potentially see someone else under center to begin the year.

For the time being the odds are pretty good that it will be Jimmy Garoppolo calling signals until Brady returns, with the third-year quarterback the likely starter for opening day if Brady is forced to sit out weeks 1-4.  That leaves Brissett with the opportunity to start getting familiar with the offense and trying to establish himself in New England’s system, and the rookie admitted on Wednesday that he’s been trying to learn as much as he can.

“(Garoppolo and Brady are) great,” Brissett said via NESN.com. “They’re teaching me a lot now, and just continue to learn from them and try to be the best player I can. … Just learning as much as I can from observing (Brady), and just watching him and Jimmy and coach (Josh) McDaniels as they go through things.”

He’ll need to pay plenty of attention, as you never know if he could be called upon at a moments notice in the event that something happens injury-wise to Garoppolo that could require him to be forced into action sooner than they’d like him to be.  Bill Belichick has a habit of creating scenarios like that to try and get his players ready, and it will be interesting to see if he and Garoppolo are rotated at all during the preseason in certain situations to simulate such a scenario given the unique situation they’re facing.

For now all Brissett can do is try and be ready for such a moment, and he understands the expectations he’s facing.

Thinking purely about the nightmare scenarios involved that would have to happen for Brissett to be needed, hopefully it won’t come anytime soon.

Belichick described the contrast between lacrosse and football, saying that lacrosse was a sport where he actually enjoyed practices.

“Pretty big,” said Belichick when asked about the impact the sport had on his entire family. “It’s a little different than football. Lacrosse is a sport you like to practice. I managed to look forward every day to going out on the practice field just to practice lacrosse. Whether it was doing fast-break drills, whether it was doing one-on-ones, whether it was scrimmaging. Football is more of a grind-it-out kind of sport and sometimes practice isn’t the most fun thing. But lacrosse it always was, I always looked forward to lacrosse season, other than the conditioning runs.”

Belichick was asked about whether or not Brady could have played the sport and gave a humorous answer.

For anyone who wants to watch the full interview, you can watch it below, including seeing Belichick doing some stick work where he admits he’s got his kids and other players completely fooled as to which side is his strongest. It’s a great interview, and you’re definitely missing out on a chance to see one of the more candid moments from Belichick if you don’t view it.

LB Steward Gone Already – The Patriots signed former 2015 Bills 6th round pick and linebacker Tony Steward back on April 22nd, but it looks like he didn’t last very long.

Steward’s name showed up on the league’s transaction wire on Wednesday, with the club opting to release him.  That leaves one available open slot at this point on the team’s 90-man roster.

It’s been a rough year for Steward, who lost his fiance, Brittany Burns, back in February to ovarian cancer, just two months following her diagnosis.  She was just 26-years old.  While the NFL can sometimes be a cruel business, it’s hard not to want him to succeed and it’s obviously too bad it didn’t happen for him here in New England.

We’ll close this morning’s entry out with the beautiful tribute the former standout from Clemson posted following her death.

“Brittany Ann Steward! Wow BEAUTIFUL is the only way I know you,” wrote Steward on his Instagram account.  “You have the biggest heart I have ever seen in my entire life and I promise you that it will live on in me, our family and every single soul you have touched. You are the strongest and most loving soul to step foot in this world. You have been my rock, my motivation, my heart, my soulmate, my everything since the day I laid eyes on you. Every single day of your life you have been a fighter and I know this because of the unbelievable family you brought me into. We will all honor everything you stand for in life. I will continue to be the person that you always bring out in me. Believe me when I say that I deeply love you with every ounce of everything in me. Love always, Your Fiancé #fightinglikeagirl#fightlikebritt.”

Brittany Ann Steward! Wow BEAUTIFUL is the only way I know you. You have the biggest heart I have ever seen in my entire life and I promise you that it will live on in me, our family and every single soul you have touched. You are the strongest and most loving soul to step foot in this world. You have been my rock, my motivation, my heart, my soulmate, my everything since the day I laid eyes on you. Every single day of your life you have been a fighter and I know this because of the unbelievable family you brought me into. We will all honor everything you stand for in life. I will continue to be the person that you always bring out in me. Believe me when I say that I deeply love you with every ounce of everything in me. Love always, Your Fiancé #fightinglikeagirl #fightlikebritt