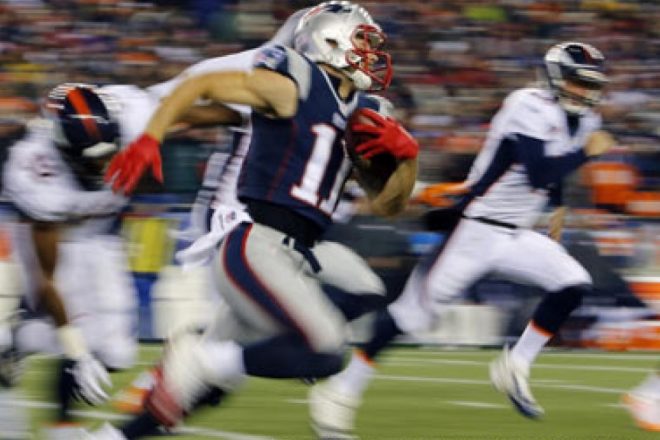 When you’re a player like Julian Edelman, you rely a lot on your feet.

What he lacks in size and strength, Edelman has always made up for in speed and quickness and it’s turned him into one of the Patriots’ most valuable assets in their offense.  It’s one of his strengths, having pulled off a ridiculous 3.92 seconds in his shuttle run at his pro day (a current Patriots team best) while using those gifts to quietly come into his own as one of the top receivers in the game.  Watching him break in and out of routes with his foot speed is one of the things that makes him so dangerous and drives defenders crazy, and it’s also what makes him great.

So it was no wonder that when he broke his foot against the Giants in week 10 last season that the red flags went up wondering about whether or not he’d be healthy enough in the playoffs to really contribute the way he’s normally used to.

After missing the remaining seven weeks, Edelman came back after the bye in the postseason against Kansas City and played well, leading the team with 10 receptions for 100 yards during their 27-20 win to advance to the AFC Championship game.  After the game he was spotted going to the x-ray room, although he denied he needed them.

“Everyone’s sore,” Edelman said via ESPN following the contest. “I finished the game and feel good enough to get ready to prepare for next week.”

He played in 80-of-83 snaps in Denver the following week, although he looked severely hampered by the end of the contest and it was obvious that he wasn’t quite right. He struggled to get separation against the Broncos’ secondary, who smelled blood and went after him.

“They were putting guys in the right place and using two and cutting guys over here,” said Edelman, who had a noticeable limp after the game. “They had a good gameplan.”

It’s nearly impossible to shut Edelman down, and it was a frustrating end to a comeback bid that he’s still in the middle of.  Initial reports following the loss at the end of February had Edelman “recovering well” but that he wasn’t sure that he would need additional surgery.  On Wednesday, ESPN reported that Edelman indeed needed surgery after being spotted over the weekend in a walking boot (one of our own members actually posted this on our message board on Saturday), but is expected to be ready by the beginning of training camp.  Ian Rapoport of the NFL Network followed up that report saying that the procedure Edelman underwent was “minor”, and involved having the screw reinserted from his original procedure.

Hopefully his recovery remains on track, because past players with foot issues haven’t fared very well.  Aaron Dobson fell into that category after breaking his foot late into his rookie year and it hampered him into the next season and he hasn’t been the same since, while Brandon LaFell also suffered a foot injury during the offseason after their Super Bowl win that put him on PUP to begin 2015 and he was never the same either, making his final year in New England a forgettable one.

Training camp is almost 2.5 months away at this point and how Edelman handles the time leading up and during camp is going to be critical.  As we know, his value to the offense can’t be overstated and it’s going to be important to make sure that his drive to get back doesn’t turn him into his own worst enemy as he looks to avoid any further setbacks.

As a result, it’s certainly a situation that will need to be monitored over the coming months.  Edelman is no stranger to beating the odds, and hopefully despite Wednesday’s news, he’ll end up faring better than his fellow receivers as he continues his recovery.

How Was This Article?
Posted Under: Patriots Injuries