7 years ago at 7:30 am ET
Follow @IanLogue
Posted Under: Patriots Rumors 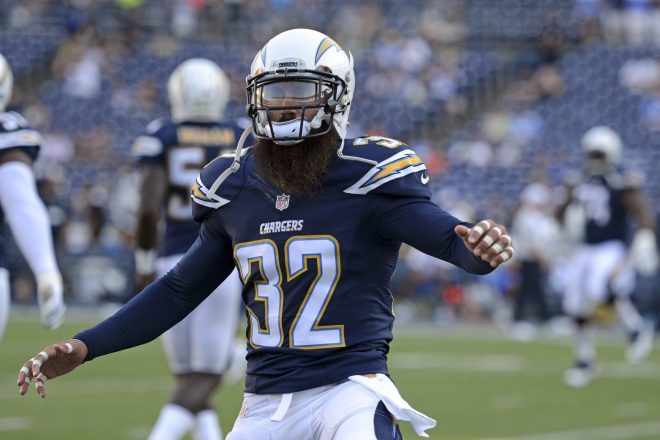 With the legal tampering period set to open today followed by free agency beginning on Wednesday, the start of players beginning to make decisions on where they’ll play in 2016 will get underway and it sounds like Chargers safety Eric Weddle has some interest in playing in Foxboro next season.

In this morning’s Monday Morning Quarterback with Peter King, Weddle made it clear that his desire is to have a chance to win a title, and he expressed admiration for the Patriots and liked how they approach the game.

“I’ve got 3-5 years left in me,” Weddle, 31, said Saturday. “I want to go somewhere I have a chance to win a Super Bowl. Until last year, I’ve never been injured. I’ve never had surgery. I don’t drink, I don’t go out. My shoulders, back, legs, hip, they’re all fine. I think I bring a lot to a team.”

At the safety position the Patriots have a reasonably good trio at safety with Devin McCourty, Patrick Chung, and Duron Harmon, but Weddle would certainly bring an interesting dynamic to that group.  He’s been among the team leaders in tackles in each of the last four seasons, leading San Diego in 2012, 2013 and 2014 while finishing second last season.

The last safety to come to New England from the Chargers was Rodney Harrison, which happened at the same age for the former safety.  Obviously that worked out pretty well, but Harrison wasn’t a highly sought after player at the time and it’s expected that Weddle will have plenty of suitors.  Still, it sounds like the allure of playing here is certainly in his mind.

“It would be funny if I ended up there,” Weddle said of New England. “We’ve played them so many times. The thing I like about them is they don’t have an ego. It’s insane to think about how good they’ve been. I’ve just been to one AFC championship game. They’ve been there every year. You respect it, you envy it, you admire it.”