Brady/Pats Extend Contract to 2019: Sources told ESPN’s Adam Schefter and Diana Russini that the Patriots will extend QB Tom Brady’s contract thru the 2019 season. Brady was signed through the 2017 season and was set to make $10 million in 2017 and $9 million this year. His salary cap hit of $15 million will most certainly come down now as a result.

With the extension and if Brady plays the entire length of his contract, Brady will be 42-years old and will have spent at least 20 years with one team, becoming one of only three players to do so. He’ll join Jackie Slater and Darrell Green as the only players to do that.

The contract isn’t signed yet, but it is expected to save the team between $2-3 million dollars against this season’s cap which is important because the team is looking to extend defensive stars Dont’a Hightower, Jamie Collins, Malcolm Butler and Chandler Jones to long-term deals to keep them in New England for the foreseeable future.

Backup QB Jimmy Garappolo is signed thru the 2017 season.

Brady Court Hearing Takes a Bad Turn: In the latest court news fallout from the Deflategate fiasco, the NFL’s case seemingly looks stronger again as at least two of the three judges in the appeals case on the surface appeared to take the NFL’s side in their questioning.

Judge Barrington Daniels Parker brought up the issue of Brady’s cell phone and said that Brady’s explanation that he routinely destroys his cellphones when replacing them to protect his privacy, “made no sense whatsoever.”

Judge Denny Chin even commented on the shoddy science used in the Wells Report pointed to a conspiracy, calling the NFL’s evidence of ball tampering, “compelling if not overwhelming.”

Their decision isn’t expected to be handed down for several months but most onlookers in the court expect the league’s suspension to be reapplied.

LaFell was only a year removed from a combined regular season and playoff run from a 1000-yard year. But offseason foot surgery held him out of all of spring and summer workouts. Once he did return, he struggled badly and ended up with only 37 catches and zero touchdowns in 2015. Chandler too struggled badly last year and finished with just 23 catches. His knee issues bothered him all down the stretch and he failed his physical. Fleming was a backup linebacker who played sparingly in the absence of both Hightower and Collins.

Both Tyms and Siliga were depth personnel and on the surface, their departure, as well as Fleming is a bit surprising as they won’t get a chance to win a spot at training camp. But since they don’t fit into the Patriots plans, the decision to release them now both frees up some cash and allows them a chance to latch on with another team quickly.

Free Agency Peek: With the honeymooning phase of free agency beginning on Monday, the Patriots aren’t flush with cash so don’t expect them to be making a flurry of big moves once it starts. The most pressing needs for the team remain:

Dolphins Bring in Mario Williams: Miami is looking to augment its pass rush and brought in free agent Mario Williams for a visit on Saturday. Williams was released by Buffalo on Tuesday and is free to sign with any team now but has stated he will make several visits before deciding on a new team.

Miami placed a $12.734 million-dollar transitional franchise tag on DE Olivier Vernon. Which means he can negotiate with other teams but gives the Dolphins the right of first refusal. The status of DE Cameron Wake who is 34 and coming off an Achilles injury is still somewhat hazy at this point as well.

Williams struggled in Buffalo in the first year of the Rex Ryan regime and at times was outwardly critical of how he was used and the game planning. In his first three seasons in Buffalo Williams tallied 38 sacks but that number plummeted to just five in 2015.

Jets Aren’t Expected to Be Big Players in Free Agency: After making a splash last year with a number of big name signings, the Jets don’t have the flexibility monetarily to be big spenders in 2016.

The biggest question now is QB Ryan Fitzpatrick and how much and how long he gets. NY GM Mike Maccagnan can’t be a happy camper seeing the deal that Sam Bradford got with the Philadelphia Eagles because that just drove up the price for Fitzpatrick’s contract.

Damon Harrison should probably be back and then the team will have to make a decision on which running back Chris Ivory or Bilal Powell remains. Right now the money is on Powell remaining with Gang Green but it is possible the Jets could lose both in free agency. Look for them to start cutting some middle of the roster veterans to create some cap space.

Right now the Jets have about $7 million dollars in cap space to work with.

Bills Release Long-time CB Leodis McKelvin: Williams wasn’t the only notable member of the Bills released this week as the team released Leodis McKelvin after he refused to accept a pay cut.

McKelvin, 30 immediately becomes a free agent and should draw significant interest even though he suffered through an injury-shortened 2015 season that saw him play in only nine games. He’s been with the Bills since being drafted in the 2008 NFL Draft as the 11th overall pick by Buffalo.

The team is still in good shape at cornerback with Stephon Gillmore and 2nd year player Ronald Darby who shined as a rookie. The release of McKelvin is expected to free up $3.9 million dollars and now gives Buffalo around $13 million in cap space.

Help Save and Rescue Dogs and Meet a Patriots Legend: Odie’s Place is a registered 501c3 Animal Rescue organization run by Brian Harrington and his wife Kerrie down in Dartmouth, Mass.

They rescue dogs that are either in a bad situation or from shelters that are about to put them down. Rescuing these animals, placing them in temporary foster homes and finding them a safe, happy permanent home is time-consuming and takes money.

Today, Sunday, March 6 at the New Bedford Home Show, he’ll be doing a fundraiser with Patriots Hall of Famer Steve Nelson who’ll be signing autographs for a small fee with all of the money going to Odie’s Place. They’ll also be raffling off a Nelson jersey that will be autographed by Nellie on site as well as taking some pictures with fans.

Come down and support a great cause and talk some football with a Pats legend…BTW my own family recently adopted a two-year-old English Bulldog from Odie’s Place and we are happy to have added her to our household. 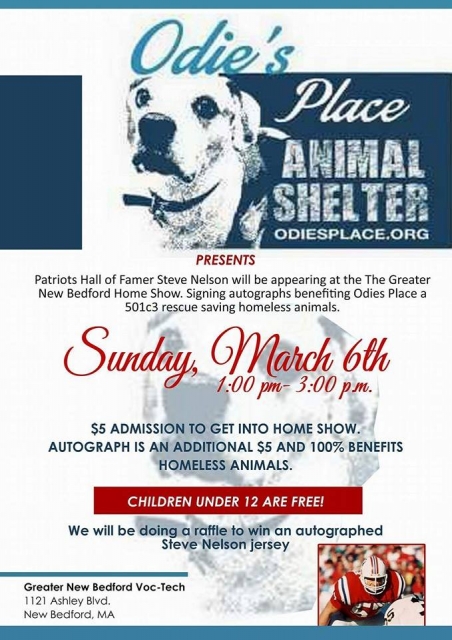