7 years ago at 9:34 am ET
Follow @SteveB7SFG
Posted Under: Patriots Commentary 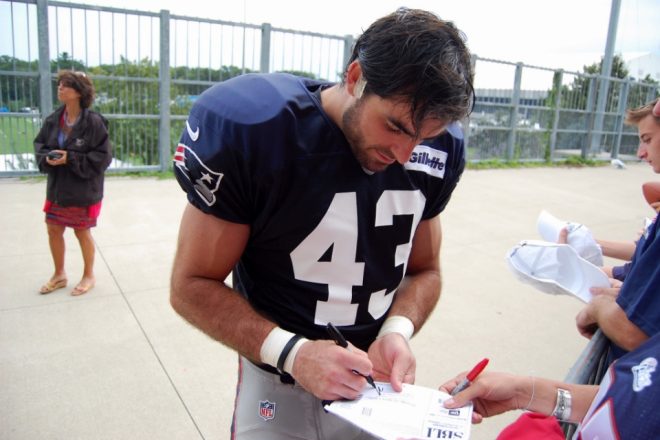 The Patriots have a couple of decisions to make in regard to free agents this off-season, but they are mainly to do with their role players and not with the starters like last year or the upcoming 2017 season.

The Patriots are deepest at the safety position with Devin McCourty, Pat Chung, Duron Harmon, Jordan Richards, Tavon Wilson, S/LB Brandon King and Nate Ebner on the roster during the 2015.

But Ebner like Wilson and King makes his living (and very well) as being a core special teams player. Since being drafted in the 6th round of the 2012 NFL Draft, no one has played more STs snaps than Ebner.  He plays few snaps on defense but it one of the team’s more valued players there besides Matthew Slater. The Patriots have long coveted those type of players dating back to Larry Izzo, Chris and Tracy White under Bill Belichick.

The 6’0, 200-pound Ohio State product is as tough as they come, being a former member of the US National Rugby Team. While a Buckeye, his prowess on kickoffs is stuff of legend as he was compared to “a heat seeking missile.”  He and fellow former Australian rugby star Jarryd Hayne are making the NFL much more visible for the game’s closely related cousin.

“Maybe it’s the physical nature of what both sports bring that allows some transition there, but I think it all comes down to a personal mindset,” Ebner said to Patriots.com back in preseason. “Whoever it is, I just think it’s a personal mindset. The role you take, how you play the game. I think it depends on the person, man.”

Still young, Ebner will be 27 when the season starts in September. Although his 40-time (4.53) isn’t fantastic, his athletic change of direction in the all-important three-cone (6.59 seconds), strength (23 reps) and explosion (39-inch vertical leap, 10’8″ broad jump) are in rarified air for a safety.

Why Ebner Will Return: Ebner is one of the Patriots’ toughest hombres on the field. Anyone who’s played at a high level of rugby has that block checked. His special teams value is right up there with Slater and Belichick, coming from a STs background, has always placed a high premium on their play.

A new contract for him shouldn’t break the bank, the team could probably re-sign him for around the $1million-dollar mark. Given that he’s a core special teamer who can fill in as a sub-linebacker or safety in short yardage or goal line, it is a bargain.

Bill Belichick certainly has a lot to say on whether they bring him back, he’s what he had to say about Ebner prior to Super Bowl XLIX, “His development has really been outstanding. I would probably put him in the, not the all-time top, but maybe in the top-five percent all time of players that I’ve coached, from where they were in college to how they grew in the NFL,” Belichick said.

“He has adapted in a relatively short amount of time to the knowledge of our defense, to the understanding of opponents’ offenses, to instinctiveness and reading and recognition at a position that he plays right in the middle of the field, which is among the most difficult – inside linebacker and safety – where the number of things that can happen is the greatest.

Why Ebner Won’t Return: The Patriots would probably try to match anything up to a certain degree if they were to get into a bidding war for Ebner’s services. Where he has a very limited value on defense, the biggest threat to his not returning would be if a Special Teams needy team wants him to anchor down their unit, in the manner of Slater and wants to pay him for that.

Bottom Line:  This one is a no-brainer; there is virtually no way other than the above scenario that the Patriots wouldn’t want to bring Ebner back. He, Slater and King are the cornerstones of a very solid unit that is already set in the kicking department with Stephen Gostkowski, Ryan Allen and long-snapper Joe Cardona.

Ebner along with Akiem Hicks has been tagged all along as the Patriots two most prized free agents to bring back this season.

Chances are around 90 percent that the Patriots bring him back in 2016.