6 years ago at 8:21 am ET
Follow @SteveB7SFG
Posted Under: Patriots Commentary 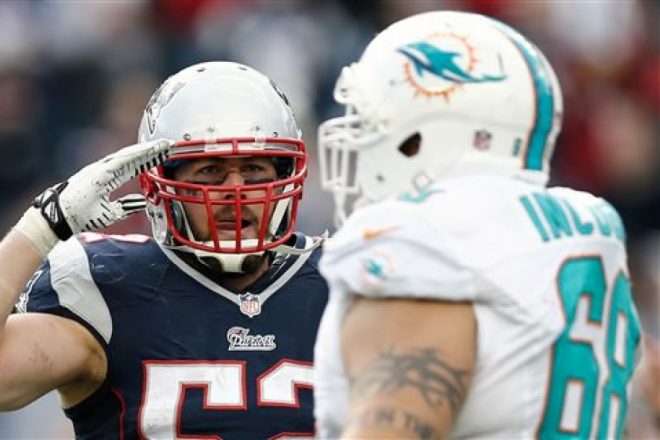 Linebacker Dane Fletcher returned to the Patriots after spending the 2014 season with the Tampa Bay Buccaneers where he suffered an injured ACL for the third time in his career. Fletcher spent four seasons with New England (2010 – 2013) after being signed as an UDFA out of Montana St.

Fletcher’s knee injury suffered in Tampa Bay last season wasn’t fully healed at the beginning of the year and started the season on the PUP list. In November, he began practicing but either he still wasn’t 100 percent back yet or the team felt that the linebackers they already had in place, gave them a better chance to win. So they opted not to activate him and reverted to IR.

He also missed the entire 2012 season with an ACL injury suffered during the first game of the preseason.

Fletcher has always excelled at being a special teams’ standout and a good reserve linebacker who can spot start when needed and always did a good job of covering running backs out of the backfield. He made the transition from college defensive lineman to professional linebacker seamlessly and is a sure tackler in the running game.

After his latest injury, Fletcher contemplated retirement but was talked out of it by his mom, now he and the team will have to decide if they want to try to give it one more go with a chance for a ring for the veteran.

Why Fletcher Will Return: Fletcher may decide that after all the hard work and rehab that he doesn’t want to end his career on that note of not being activated off of PUP.

Fletcher was only gone a season and knows the Patriots system. He spoke in November about returning to be “with his brothers” and how he was happy to be back in a Patriots uniform.

He said that once he made the decision to return, he was all-in and felt strong when he began practicing again in November.

The Patriots know what they have in the 6’2, 245-pound linebacker in Fletcher, which is why they brought him back in the first place and they’ll want his ability to move around at different positions, play special teams and help out covering backs in sub-packages.

Why Fletcher Won’t Return: The Patriots could feel that after this third injury he’s lost a step and that he won’t be able to play at the level that he did in the past. And there is also the chance that after his latest setback, Fletcher may decide that three ACL injuries were enough and decide that it is time to move on.

Fletcher was back home in Bozeman, Montana, where he played college football at Montana St. and was plugging his newest venture, “The Pitt” where he hopes to train high school and college athletes on a local television interview. If there is another venture that could pull him away from the NFL, this may do it.

Bottom Line:  Right now it is even money if Fletcher returns or not. He’ll turn 30-years old in September and three serious knee injuries have taken their toll. If he’s healthy now after his latest injury, then the Patriots would love him back to compete with Jonathan Freeny, Darius Fleming, Dekoda Watson, Jon Bostic, Brandon King and Jerod Mayo for a back-up roster spot.

That’s the question, health and desire at this point. Fletcher was close to calling it quits last season, however he did admit that it was very tough watching his former teammates win it all in the Super Bowl against Seattle and that factored in his decision to return.

While there’s a good chance of him being offered the chance to return in 2016, I think Fletcher will have a tough time making the roster this season.

By: Robert Alvarez
Patriots Chairman and CEO Robert Kraft is honored by two organizations for his charitable and humanitarian work.
50 mins ago