7 years ago at 6:14 am ET
Follow @SteveB7SFG
Posted Under: Patriots Commentary 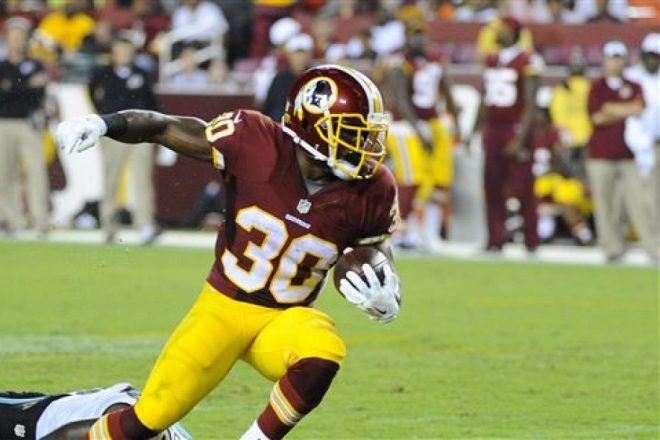 RB Williams already had Patriots connections prior to his signing

The Patriots had a series of roster moves in the aftermath of the loss to the Broncos on Sunday night and they’re looking to bolster their wide receiver and running back depth as well as in the kick returning game.

The team released rookie WR Chris Harper but it is expected that he’ll be signed back to the practice squad if he clears waivers. The team also signed WR/KR Demaris Johnson and RB Trey Williams to the active roster while re-signing WR Austin Hill to the practice squad. In  a corresponding move the team placed DE Trey Flowers on IR.

Johnson is a diminutive 5’8 receiver and returner who has spent time with the Eagles and Texans. In Philadelphia he appeared in 43 games with nine starts and caught 52 passes for 601 yards and a touchdown. He also returned 23 kickoff returns for 577 yards and 47 punt returns for 445 yards with one touchdown.

Last season as a member of the Texans, Johnson played in 16 games with eight starts and finished with 31 catches for 331 yards and a touchdown. He also returned six kickoffs for 136 yards and had nine punt returns for 54 yards.

Williams is an intriguing case as both a running back and kick returner. He signed with Washington as a UDFA  out of Texas A&M in  May after not being selected in the NFL Draft. After being released by Washington at the end of training camp, he was signed to the practice squad. He was subsequently signed by Dallas to the 53-man roster but was  inactive for four games before being released by the Cowboys on Nov. 30.

The 5’7, 195 pound running back played for Willie Amendola, father of Patriots WR Danny at Dekaney High in Texas. And the elder Amendola was very impressed right off the bat.

“Goodness gracious, as soon as he touched the ball and took off running and made a cut, I was like, it’s over,” said  the elder Amendola prior to the draft. “We’re all right. We’re gonna be O.K.”

In his NFL Draft Guide, Dane Brugler wrote about Williams; “ a jitterbug athlete with loose hips, rubber ankles and natural fluidity.”  He added, “quick footed, with plant and go burst and the ability to get north-south quickly…sudden shiftiness to pull a rabbit out of a hat…showing nifty moves that are tough to contain especially in space…very good speed for the position, mixes his gears well….small hands but was a reliable receiver out of the backfield”

As far as negatives, Brugler wrote that Williams with his build, lacks power and won’t generate yards after contact and that he is unreliable as a pass blocker. He’s best served as a returner or as a change of pace weapon out of the backfield.

The signings of these two players represent an attempt by the Patriots to bolster the kicking game and once Amendola and hopefully Edelman return, the team will look to ease their workloads in the kicking game.

The team needs a boost in depth at both positions and Johnson has experience in the Texans’ offense which is similar to New England’s and his time to incorporate into the Patriots system should be minimal.

But it is Williams that may be the X-factor here. Small in stature but lightning quick in space, the obvious comparisons to Dion Lewis will happen quickly. But can the Patriots catch lightning in the bottle twice?

It bear watching if the Patriots try to use him in the passing game more as he eases into the system. They’ve under-utilized James White in the passing game and although he’s produced when in the lineup (two TDs against Buffalo), he doesn’t seem to have the coaches or Brady’s confidence moving forward.

Brandon Bolden got plenty of reps on Sunday night in Denver; perhaps it was just a game-plan type scenario but with the offense looking to replace a ton of production that is out hurt right now, Williams may get an opportunity to show what he can do with the ball in his hands.

Both Williams and Johnson will get a chance to showcase their abilities in the return game and that should benefit immediately. Hopefully Amendola will return this week and help ease the load somewhat off of Keshawn Martin and Brandon LaFell on the outside with Scott Chandler taking over for Rob Gronkowski at tight end.