7 years ago at 9:19 am ET
Follow @SteveB7SFG
Posted Under: Patriots Commentary 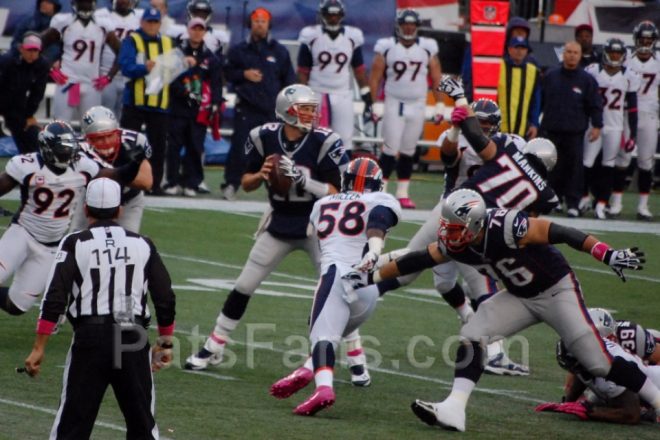 The Patriots have a short week to prepare and head out west to take on a familiar nemesis in the Denver Broncos on Sunday evening.

The Broncos (8-2), are fresh off of a tough 17-15 win on the road against the Chicago Bears on Sunday. Brock Osweiler made his first career start and was impressive completing 20-27 passes for 250 yards. The defense kept the Bears out of the end zone time and again with impressive stops.

The Patriots beat the Buffalo Bills 20-13 on Monday Night Football. Tom Brady, despite being hit hard all night long passed for 277 yards in leading the Patriots to the victory. The defense was impressive holding the Bills to a single touchdown and a pair of field goals.

The game is scheduled for 8:30 p.m. and will be televised by NBC and will have their announcing crew of Al Michaels and Cris Collinsworth on the call. It will also be carried by the Patriots flagship radio station 98.5 FM the SportsHub with Bob Socci and Scott Zolak.

Here are our five first impressions of the Broncos:

Team is Osweiler’s Now: With the news that Peyton Manning has his foot in a cast and will be out at least another two weeks, we now know that Osweiler will be at the helm for the foreseeable future and barring a total collapse will be the quarterback to lead Denver into the post season.

He did nothing to hurt himself or the team in Chicago; he runs the offense that Gary Kubiak wants to operate in rather than a hybrid that they were running for Manning. His first drive was a beauty, capped off with a 48-yard touchdown pass to Demaryius Thomas.

Osweiler did all the little things right in his first start; he knew when to throw the ball away and not try to force things where there was no opening. He got everyone including new TE Vernon Davis involved. And he used his three plus years of being a backup to prepare himself to play well against a good Bears defense. Most importantly, for the first time this season the Broncos didn’t turn the ball over.

Manning has been a shadow of himself all season and his 17 interceptions are the most in the league. Osweiler runs the offense exactly as his coach envisions it and although he may have some bumps in the road gives the Broncos the best chance for success.

Broncos Hope to Have Sanders, Ware Back Sunday: The injury news is just related to Manning’s foot for the Broncos. Wide receiver Emmanuel Sanders (ankle), and OLB DeMarcus Ware (back), both missed the Chicago game on Sunday.

Sanders tried to go but after working out with the training staff prior to the Bears game, he still wasn’t close to 100 percent and was deactivated. Ware missed the last couple of games with a back ailment flared up against the Colts and hasn’t practiced since.

Ware has circled this game as a possible return and after watching the Bills pass rush  pound Tom Brady last Monday night, must be chomping at the bit to get back into action.

But in reality, the return of Sanders to the Broncos offense would be more of a boost, especially for a young QB making just his second start against an underrated New England defense.

Defense Not Lacking Confidence, “Best in the World”: The Denver defense which has been the top unit in the NFL this season in terms of yardage allowed (277 ypg entering Sunday), put an exclamation point on Sunday’s win in Chicago, stuffing Bears RB Jeremy Langford two-point conversion attempt with 29 second left.

The Broncos secondary, allowing the least amount of passing yardage in the league by a wide margin, is a confident, cocky bunch who play right to the edge and sometimes over the line between tough and dirty play.

Against the Chiefs in Week 2 they committed four personal fouls in the first half. Aqib Talib was suspended for the second Chiefs game for eye-gouging Colts tight end Dwayne Allen and the next week T.J. Ward was ejected for punching Chiefs WR Jeremy Maclin.

“Best DBs in the league,” Omar Bolden said on Tuesday to the media about the Broncos’ secondary.

Their best moment came against Aaron Rodgers and the Green Bay Packers during their Week 8 matchup holding Rodgers and his fleet crew of receivers to just 76 yards passing, the lowest amount in any of his career starts.

With a smothering pass rush consisting of Ware, Von Miller and rookie Shane Ray, the Broncos play an aggressive and blitzing man-to-man coverage and they rely on their corners to get it done.

“Ain’t no better corners than me and ‘Lib out there,” CB Chris Harris said. “Big receivers, small receiver, it doesn’t matter.”

Running Game Gets Spark in Chicago: The Broncos needed a spark in the running game against the Bears with first time starter Osweiler at QB and got it on Sunday. After rushing for less than 70 yards in the previous two games, they rushed for more than that in just the first half.

It was the type of performance the Broncos have looking for, the running game has been extremely inconsistent thus far in 2015 with six games of having the team rush for less than 70 yards and four games with them being very effective, with 944 yards, the bulk of their season’s total in wins against the Bears, Packers, Vikings and Browns.

In Kubiak’s system, the backs have to be in a “one-cut-and-get-up-the-field mode. Parts of their struggles have been the running backs haven’t been decisive enough. But  also a revolving door of offensive linemen has hurt their continuity….something the Patriots know full well.

So with a renewed sense of running the ball to help their young QB, the running matchup should be a key one to monitor.

Broncos Tight Ends Are Young QB’s Best Friend: With Emmanuel Sanders out for the Bears game, the Chicago defense made a concerted effort to take away Bronco WR Demaryius Thomas and in doing so opened up the middle of the field for QB Brock Osweiler.

Osweiler found the big spaces in the middle of the Bears defense time and again hitting tight ends Vernon Davis and Owen Daniels for a combined 10 catches for 137 yards, with eight of those catches going for first downs.

It was Davis’ best production since coming over from the 49ers as he snagged six passes for 68 yards and looked more like the Davis we were accustomed to seeing in San Francisco. He seemed to be much more in sync with Osweiler than he had with Manning in the previous few games.

Perhaps the Bears were a bit gun-shy after Thomas burned them for a 48-yard touchdown on the opening drive of the game, but those two tight ends will be a tough matchup for the Patriots secondary on Sunday.