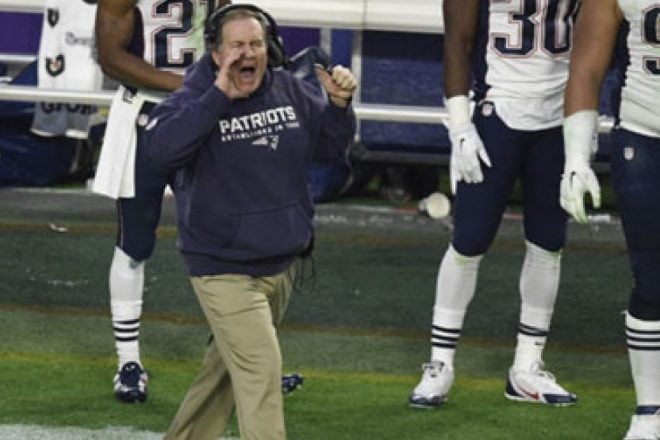 For those New England Patriots fans refusing to fork over their money in a manner that would benefit the NFL, good news: even though you may not have subscribed to the Sunday Ticket, there is a very good chance that you will be able to view next week’s game against the Dallas Cowboys from the comfort of your own living room.

When the networks negotiated with the NFL schedule makers six months ago, CBS walked away with one coup: the most popular NFC team (the Dallas Cowboys) would host the most successful team of the millennium (the New England Patriots) as the primary late afternoon game on a week five doubleheader. In the Tom Landry–Jimmy Johnson years from 1960-1993 the Cowboys advanced to 14 conference championship games, and won four of the seven Super Bowls they appeared in.

That success (plus the early futility of the Falcons and Saints) made the Cowboys America’s Team; who else was any NFL fan that resided south of the Mason-Dixon line and east of Los Angeles going to root for? Couple that with illogical geography that placed then in the NFC East – which resulted in Dallas being broadcast on a regular basis in three of the top ten television markets (New York, Philadelphia, Washington) – and the Cowboys were viewed by more pairs of eyeballs than any other NFL team during that time. The net result is a huge fan base that has been passed down from one generation to the next.

Though they have not duplicated that early success, the Cowboys have still made the playoffs ten times since Jerry Jones pushed Johnson out the door, and that huge fan base remains intact. Put them on television against the league’s most successful team of the last fifteen years – and one that has been inappropriately been painted as a villain by the league offices and their business partners in Bristol – and you have what should be a ratings bonanza. The only thing CBS was not counting on was injuries to two of Dallas’ top players – the network can no longer market this as Tony Romo and Dez Bryant take on Tom Brady and Rob Gronkowski – but they will surely come up with some other snippet to hype this contest.

This game opened up last week with the Patriots favored by 8½. As of Monday the line is varying quite a bit depending on where you shop; for example, right now I am seeing the Pats -7½ at Wynn – but as high as -9 at several other venues.

Even though the other late CBS game features another elite team (Denver), the Patriots-Cowboys game will get the widest coverage of any game on either FOX or CBS this weekend. The Broncos-Raiders game will be broadcast in Indiana (many there are bigger fans of Peyton Manning than they are of the Colts), Tennessee (except Memphis), Missouri, Iowa, Kansas, Nebraska, South Dakota, North Dakota, Montana, Idaho, Wyoming, Colorado (duh), New Mexico, Utah, northern California and Reno; all other US television markets will get the Pats-Cowboys. I would assume that it will be the primary NFL game in Canada and the UK as well. CBS will send its top broadcasting crew of Jim Nantz, Phil Simms and Tracy Wolfson to announce the game.

As for the other games, the New England area will get to see Buffalo at Tennessee early on CBS, and I am projecting Seattle at Cincinnati as the early game on FOX. (Note: as of Monday, FOX has not yet released what game will be televised in New England, New York, Texas and parts of Florida). The Seahawks-Bengals would certainly be the best game to broadcast, but FOX has a history of preferring to show NFC teams; apparently they don’t want to promote clubs that are typically broadcast on rival CBS. If that is the case then the region would likely get New Orleans at Philadelphia instead, despite neither team having a winning record.

Here is a full listing of what games are being broadcast where, along with the announcers. For a visual map, please check back with our friends at 506 Sports later this week.

There are no early game on CBS due to NFL broadcast rules in Philadelphia, Cincinnati, Atlanta and St. Louis.

Broadcast everywhere except as noted above.

Areas To Be Announced: New England, New York (except Buffalo), Florida (except Jacksonville and Tampa), Texas, Oklahoma and New Mexico. I’m thinking the northeast will get Seattle-Cincinnati while the southern states will get the Saints-Eagles. Keep in mind that local affiliates can ask for a change; those requests are usually routinely granted.