7 years ago at 8:01 am ET
Follow @SteveB7SFG
Posted Under: Patriots Commentary 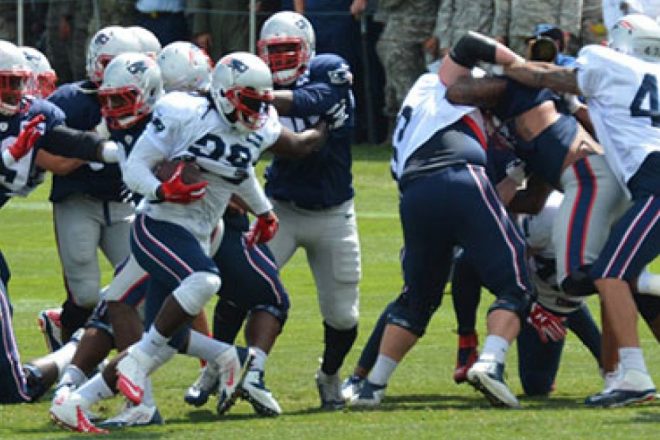 Next Man Up Mantra Already in Full Swing

The Patriots are dealing with a rash of injuries during training camp that is already straining their depth. With a roster of 90 players allowed and 21 not being able to take the field is particularly draining as the team tries to limit the reps and wear and tear on some of their skill position players to keep them fresh for the marathon of the regular season and playoffs.

With just over a week in during training camp, 24 players or nearly 27 percent of the Patriots roster was either not available for practice or wasn’t there at the end of the day. That is an alarming trend, especially this early in the season.

MIA List: The following players were not spotted on Friday’s practice session:

To compound this, LaGarrette Blount went down with a knee injury and it was reported by the Boston Globe’s Shalise Manza-Young that he suffered a sprained MCL and will miss a few weeks. He’s expected to be ready for the start of the season but is already suspended for Game 1.

Malcom Brown and Bryan Stork also suffered injuries that caused them to not be able to finish practice but neither is considered serious at this point.

It certainly shows why the Patriots and Bill Belichick place such a premium on the bottom of the roster. Because many of these players will be counted upon during Thursday night’s game against Green Bay.

From a team standpoint, they hope that the vast majority of players will be back in the lineup quicker rather than later. But it also opens the door for other players to showcase their talents.

Gray’s Time is Now at Running Back: With Blount out possibly until Week 2 of the regular season, it shows just how little experience the team has behind him. Behind Blount, most players have precious little game experience and Gaffney and Lewis being unavailable presents a perfect opportunity for Jonas Gray to step up to the table.

On Friday Brandon Bolden was getting a ton of work along with Gray. Bolden has the most experience but he’s known primarily for his outstanding STs work. But right now, it will be Gray’s turn to show that the Indianapolis game was not a fluke and he can be counted upon. He and Bolden will share big back duties.

The third down back duties are coming down to either James White or Travaris Cadet. Cadet has been coming on lately although both are getting plenty of reps. The big question now will be if he can pass block effectively. That is something he wasn’t asked to do in New Orleans.

Amendola Continues Rise: With four of the top five WRs options out of the mix, the onus has fallen to Danny Amendola to take on a bigger role. And he has responded excellently thus far. His rise actually began during the final stages of the regular season when, finally healthy, he carved out a nice role for himself.

During the playoffs, he was tied with the team lead with three touchdowns and played a key role in the Divisional Playoff win over Baltimore and the Super Bowl. He had the catch of the day yesterday, a one-handed grab along the sidelines from Garoppolo. With him, as always the questions concern health. If he stays healthy, he’ll be a very big part of the offense in 2015.

Josh Boyce, Brandon Gibson and Chris Harper are three other players at the WR position who are getting extended reps with so many of the other players out of the mix. Boyce is an intriguing case as he was originally thought to be guy who could be a contributor both offensively and on STs. Thus far for him it hasn’t worked out, but he’s had a pretty solid camp thus far and Thursday, he should see plenty of work against the Packers in the first pre-season game.

Gibson has been having a good training camp to date, albeit with limited work. Now he’ll probably see a ton of action against Green Bay. He and Amendola have the most experience and will be looking to grab a roster slot.

Harper is a rookie who is on the slight side, he’s listed at 185 but seems thinner than that. He’s got the speed and athleticism to make his mark and for him, this has fallen into place quite nicely.

Linebacker depth still an issue: Prior to the beginning of training camp, we thought the Patriots starting trio of linebackers, Jerod Mayo, Jamie Collins and Dont’a Hightower had the tools to be one of the most talented groups in the league. But behind them there was a concerted lack of experience…now that theory is being tested.

Mayo is coming back from a serious injury and Hightower is still wearing a red non-contact jersey. With Fletcher, Martin, Wells and Fleming out, the onus will fall to James Morris and Dekoda Watson to pick-up the slack. Cameron Gordon was just brought back into the fold and rookie Xzavier Dickson is seeing a lot of work inside.

One player to watch in the upcoming days is Jonathan Freeny; the former Dolphin STs player has been getting plenty of work in the defense and has played well. With the lack of experience on the field, he could work his way into a nice niche on the roster.

So the Patriots have Saturday’s practice at 9:15 followed by an off day on Sunday and two practices Monday and Tuesday scheduled for 1:45 p.m. prior to Thursday’s pre-season opener against the Packers. All of these injuries will test their depth, but if there is one thing that Bill Belichick has done well is to manage his roster.

But the key now is to get the work in that the team needs without suffering any further injuries.  “Somebody have that guy’s name on speed dial?”