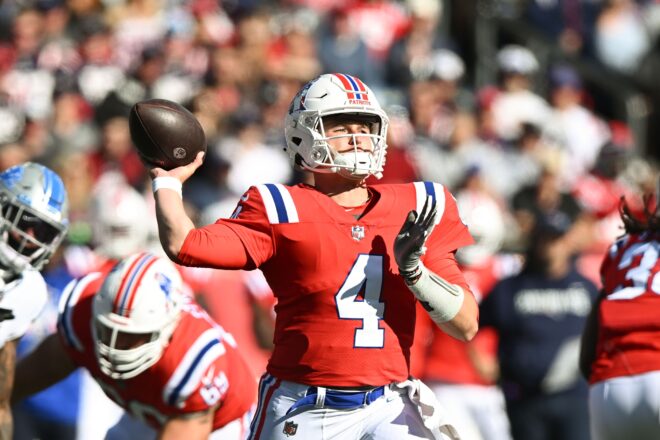 Quarterback Bailey Zappe got a little love from his hometown recently, with the former Victoria, Texas East High School signal-caller reportedly set to see his old #4 jersey be retired.

The move makes Zappe the first athlete the school has done this for, and Zappe was grateful both for the honor and the journey that’s come with it.

“It goes to show, you only need one opportunity, said Zappe via Geno Perez of CrossRoadsToday.com.  “I only had one offer coming out of high school to HBU, of course one opportunity in the NFL to play and make a name for yourself.”

“The only thing I can tell anybody is if you get that opportunity, take advantage of it. I’ve been very grateful that I have a bunch of people in my corner that help me a lot to get to this point and hopefully this journey keeps going.”

Zappe, who was drafted in the fourth round by the New England Patriots last April, had a solid rookie season and has already taken some solid steps forward during his limited time in the NFL.

The first-year QB ended up making a name for himself in 2022, filling in while Mac Jones missed time with an ankle injury.  Zappe entered the contest early during their week four match-up against Aaron Rodgers in Green Bay after Brian Hoyer went down with a concussion.

Despite having little preparation, the moment didn’t seem too big for Zappe.  He settled in and ultimately led two second-half touchdown drives that gave his team the lead and nearly pulled off the upset, although Rodgers eventually helped the Packers win in overtime.

However, Zappe impressed fans here locally after following that up by winning his next two starts in blowout fashion over both the Lions (29-0) and Browns (38-15).

He also saw time during the team’s loss against the Bears but still finished 65-of-92 (70.7%) for 781-yards with 5 touchdowns and three interceptions during the four games he played in.

Even better, his performance moved him up from being the number three QB to the back-up spot on the depth chart behind Jones, which is a pretty good step forward for the standout from Western Kentucky.

What his future holds still remains to be seen but should his number get called again, it’s safe to say that everyone in his hometown will most definitely be watching.