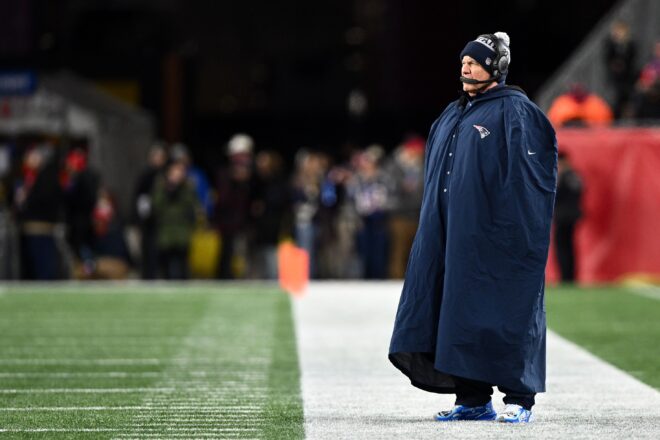 Coming off Sunday’s disappointing loss to the Cincinnati Bengals, it was hard to imagine a scenario where the New England Patriots still had a shot of playing postseason football.

Fortunately, both the Miami Dolphins and New York Jets each continued their four-game skid with losses by each club this past weekend.  That, coupled with a Las Vegas Raiders loss and the Titans dropping their fifth straight, has things in the AFC suddenly falling in the Patriots’ favor with two games left to play.

As it stands right now, if the Patriots win out, they’re in.  However, when you take into account the fact New England still has both Miami and Buffalo in front of them, it certainly feels like a tall order.

Competitively, all signs are pointing to Miami being without Tua Tagovailoa this weekend, with the young QB once again finding himself in concussion protocol.  Down in Miami, there seems to be some question about whether or not he’ll start Sunday or if Teddy Bridgewater will get the nod when the Dolphins take the field at Gillette Stadium.

The Dolphins are facing the same pressure as the Patriots.  After a promising start, they’ve dropped four straight games, and a loss on Sunday could deliver a knockout blow to a team that had appeared headed toward being a factor in the AFC this January.

However, a victory on Sunday over the Patriots and a Jets loss would clinch a playoff berth for the Dolphins and likely end New England’s playoff chances.

At the same time, for the Patriots, getting some redemption with a win over the Dolphins would set up a showdown next Sunday in Buffalo against a team that may still have something to play for.  Depending on how things unfold this weekend, it’s possible the Patriots could potentially have two things at stake next weekend.  They could both be playing for a playoff berth, as well as the chance to cost the Bills the top seed in the conference.

The latter would certainly be satisfying.  Knocking Sean McDermott’s team out of a possible bye during Wild Card weekend would be pretty fantastic.  Instead of a week off to get healthy, they’d instead face a longer road for a Bills team that many believe is destined to be the last team standing in the AFC.

Getting a win on Sunday would also set up a possibility where provided New England wins this weekend, the Patriots could even survive a loss in Buffalo and still make the postseason.  That would require a loss by the Jets on Sunday, along with Miami losing again to Gang Green next weekend.  They would also need both Pittsburgh and Las Vegas to each lose one of its final two games.

They’d also have to hope the Jaguars lose each of their final two contests, with both the hapless Houston Texans and a finale against a banged-up Tennessee team awaiting a surging Jaguars club.

Plain and simple, after being seemingly out of the mix, this crazy NFL season still has New England in the driver’s seat.  The big question now is whether or not, after 16 disappointing weeks, the offense can finally figure things out.

So far, each time we’ve seen this club, it’s been more of the same and, in some cases, even worse.  But given how bizarre this NFL season has been overall, stranger things have certainly happened.

While it’s not too late to figure things out, we’ve seen enough where that possibility feels like quite a longshot.  But after what we saw this past Saturday against the Bengals, this team looks like it still has some fight left in it.

Whether or not it will be enough is the biggest question, and with time running out, it would be nice to come away with something positive in a season that has definitely seen very little of that to this point.

READ NEXT:
Two Wins Could Certainly Change Things For the Patriots
Posted Under: Patriots Commentary