1 month ago at 11:03 am ET
Follow @SteveB7SFG
Posted Under: Patriots Commentary 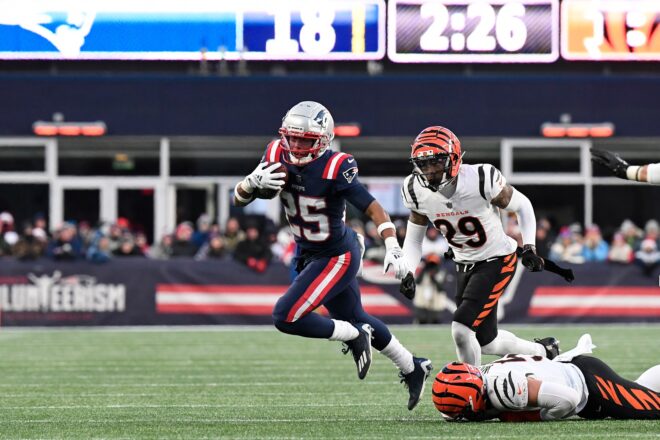 “It’s Groundhog Day.” That is what the 2022 version of the Patriots has felt like all season. Like Bill Murray in the film version, they continuously try to change the outcome, but it always ends up the same.

While driving for a game-winning touchdown at the Cincy three-yard line, Rhamondre Stevenson was gang-tackled and driven back, and the final Bengal to join the tackle, Vonn Bell, punched the ball out. The Bengals recovered, and it was once again Groundhog Day rather than a Christmas Miracle ending.

The situational football gaffes continue for the Patriots, and the fact that they were able to mount a comeback bid at all was a surprise after a lifeless, terrible first half where the entire team looked dead.

After the Raiders game and how the game ended, I said on the podcast this week that I feared this loss would have a lasting effect on the team. And for the first 30 minutes, it looked exactly like that. But the defense made a big play that woke up the team, and in the game’s final 25 minutes, it was a different team than the one that ran off the field to boos at halftime.

The First Half Was One For the Ages…But Not in a Good Way: The Patriots lost in a crushing fashion last week, allowing two touchdowns in the last minute against the Raiders. That crushing feeling was carried over to the first half of the game against Cincinnati.

This was a bad, ugly half of football for the Patriots in all three phases of the game. Offense, defense, and special teams. Joe Burrow carved up the Patriots’ defense surgically and with ease. He completed his first 11 passes and ended up at halftime, passing for three TDs and 284 yards. Cincinnati held the ball for more than 21 minutes.

The Patriots managed just 70 yards, holding the ball for only 8:34, going 0-3 on third downs. Punter Michael Palardy added an exclamation point on things, by dropping a snap by Joe Cardona and barely getting off a punt that was shanked.

Marcus Jones Pick-Six Awakens Team: The rookie kick returner/cornerback/receiver gave the Patriots and the fans in the stands a bolt of energy that was desperately needed. The Patriots brought a blitz up the middle and Joe Burrow and JaMarr Chase had a miscommunication. Burrow threw the ball on a deep-out pattern with no one there. Jones saw the pass and intercepted it with ease while Chase was still running deep.

He then returned it 69 yards for a pick-six with some incredible open-field running to make the score 22-6. Coupled with his game-winning punt return TD against the Jets and a 48-yard TD on a screen pass against Buffalo, Jones is a true triple threat in the game and a valuable weapon.

The Defense Gets It Figured Out: After the atrocious first half, the Patriot defense finally got it figured out and played much better and more competitively in the second half.

They were able to hold the powerful Bengals offense scoreless in the second half. Burrow, who had 284 yards passing at the half, only passed for 91 in the last two quarters. The Bengals chewed up the defense for 303 yards at halftime but only 142 yards after that. Burrow finished 40-52 for 375 yards with 3 TDs and 2 INTs, for a passer rating of 99.4 on the day.

The running game with Joe Mixon could only manage 73 yards overall. Mixon ran for 65 yards on 16 carries (4.1-yard avg.) but added an additional 43 yards receiving on 7 catches.

Kendrick Bourne Has His First 100-Yard Game: Bourne, who has been in the doghouse all season long and barely used after having an excellent first year with the team in 2021, had an outstanding game.

After the pick-six, the defense forced a punt, and the offense finally showed some life, led by Bourne. On the 11-play, 77-yard drive, Bourne converted the Patriots’ first 3rd down conversion of the day. He followed that up with an outstanding 32-yard catch in heavy traffic. He finished off the drive with a terrific toe-tap in the end zone to make the game interesting at 22-12. A two-point conversion would have made it a one-score game, but the offense couldn’t convert.

Bourne added a fantastic 28-yard grab along the sideline that was initially ruled incomplete. Bill Belichick looked PO’d that he had to use a challenge, but it was worthwhile. Bourne finished with 6 catches for 100 yards and a score, the first 100-yard game of his career. He added 29 more on one rushing attempt.

Now the Patriots have dropped four of the last five and closes out the home season, hosting the Miami Dolphins next Sunday before closing out the season in Buffalo.

Look for my Positional Report Card on Monday.